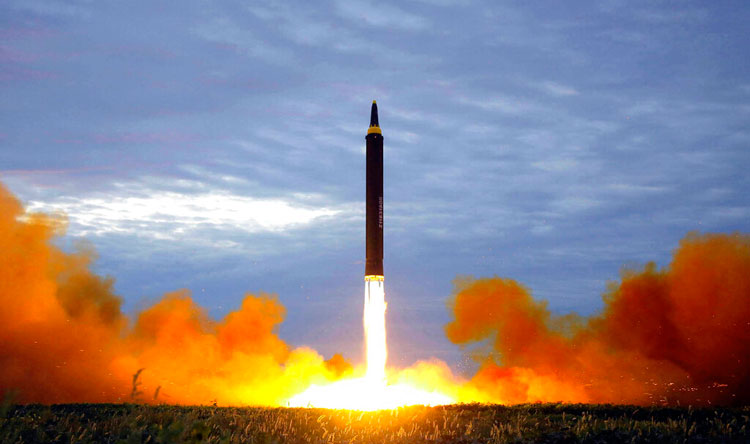 New activity has been detected at a North Korean intercontinental ballistic missiles plant, South Korean media said on Thursday, as US President Donald Trump said he would be very disappointed if Pyongyang rebuilt a rocket site.

Spy chief Suh Hoon told the lawmakers he viewed the activity as missile-related, the JoongAng Ilbo said. It quoted Suh as saying North Korea continued to run its uranium enrichment facility at the main Yongbyon nuclear complex after the first summit between Trump and its leader, Kim Jong-un, in June in Singapore.

The reports came after the leaders’ second summit in the Vietnamese capital of Hanoi broke down last week over differences on the limits North Korea was ready to put on its nuclear programme and how willing the US was to ease sanctions.

The Sanumdong factory produced the Hwasong-15 ICBM, which can fly more than 13,000km. After its test flight in late 2017, North Korea declared the completion of its “state nuclear force”, before pursuing talks with South Korea and the US last year.

South Korea’s presidential office and defence ministry declined to confirm the reports on Sanumdong, saying they were closely monitoring North Korea’s activities together with the US.

There was no immediate response from the US state department.

On Tuesday, two US think-tanks and Seoul’s spy agency said work was underway to restore part of the North’s Sohae rocket launch site that Kim, at the Singapore summit, vowed to dismantle.

“I would be very disappointed if that were happening,” Trump told reporters in the Oval Office, when asked if North Korea was breaking a promise.

“It’s a very early report. We’re the ones that put it out. But I would be very, very disappointed in Chairman Kim, and I don’t think I will be, but we’ll see what happens. We’ll take a look. It’ll ultimately get solved.”

“The President’s obviously open to talking again. We’ll see when that might be scheduled or how it might work out,” Bolton said. Bolton also said it was too soon to make a determination on the reports of North Korea’s missile activities. “We have a lot of ways of getting information,” he said. “We’re going to study the situation carefully. As the President said, it would be very disappointing if they were taking this direction.”