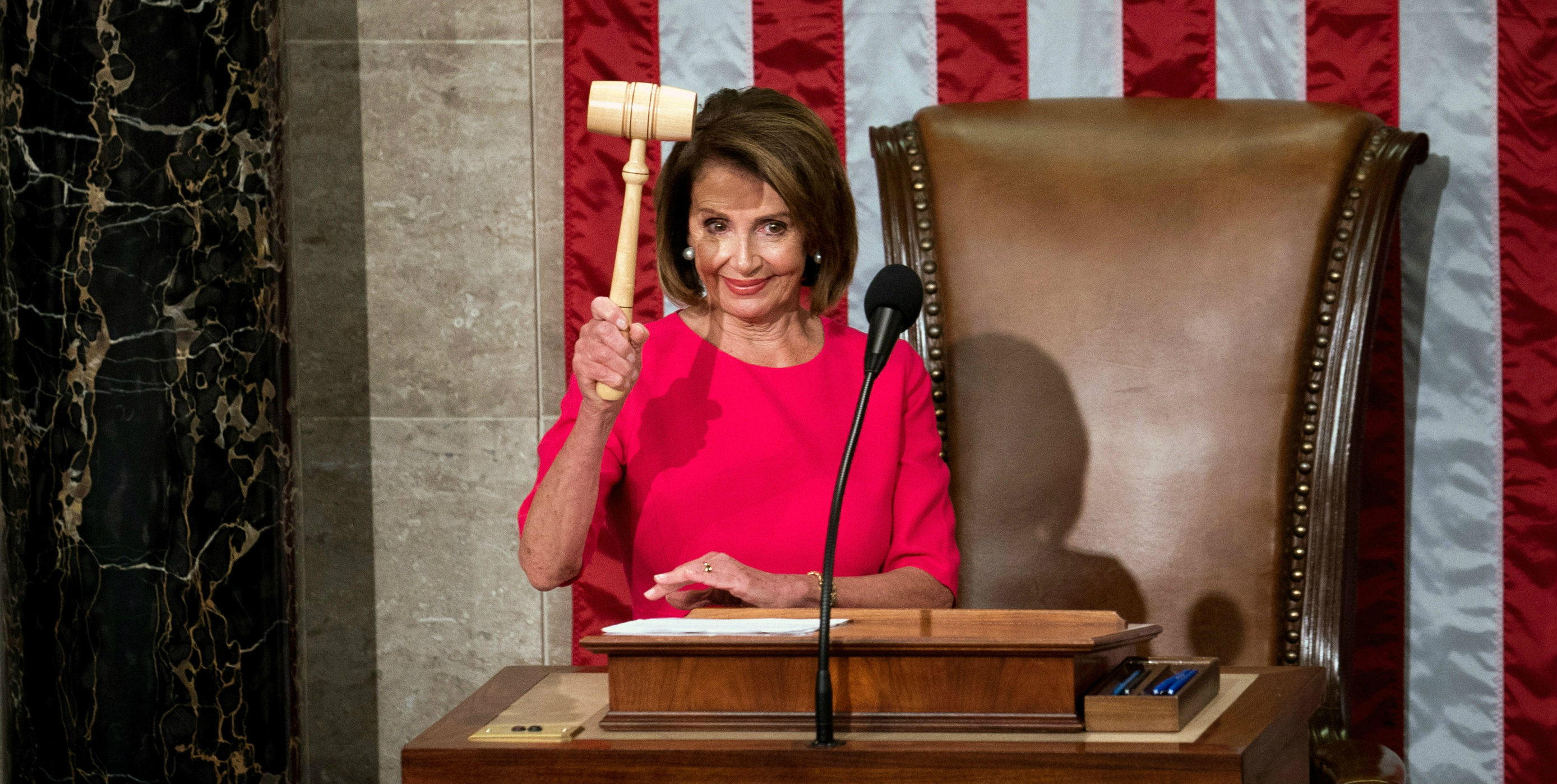 Nancy Pelosi wields the gavel after her election as speaker on Thursday.
The New York Times
Julie Hirschfeld Davis/NYTNS   |   Washington   |   Published 04.01.19, 07:10 AM

Ebullient Democrats assumed control of the House on Thursday and elected Rep. Nancy Pelosi of California speaker, returning her to a historic distinction as the first woman to hold the post.

They then moved to defy President Donald Trump and passed bills that would open government agencies shuttered by an impasse over his insistence on funding for a border wall.

Both measures are almost certain to die in the Senate.

On the first day of divided government in a reordered Washington, Pelosi, now second in line to the presidency, and Trump clashed from their respective ends of Pennsylvania Avenue almost from dawn until dusk. The California Democrat began her day by suggesting that a sitting President could be indicted. Late in the day, Trump made an attention-getting appearance in the White House briefing room with a belligerent demand for a wall on the border with Mexico, drawing a rebuke from the newly installed House speaker, who said she would give no more than a dollar to fund what she branded “an immorality”.


Our nation is at a historic moment. I pledge that this Congress will be transparent, bipartisan and unifying, that we will seek to reach across the aisle in this country, and across divisions across our nation.
- Nancy Pelosi


In between, as the start of the new House showcased a younger and more diverse majority in the staid corridors of the Capitol, Pelosi pledged to run a “unifying” Congress that would bridge partisan divides and heal rifts in a polarised country.

“Our nation is at a historic moment,” she declared. “I pledge that this Congress will be transparent, bipartisan and unifying, that we will seek to reach across the aisle in this country, and across divisions across our nation.”

In ascending to the speakership, Pelosi finds herself at the fulcrum of a bitterly divided body politic, poised to do battle with and demand accountability from an increasingly combative Trump in ways the Republican Congress of the past two years refused to. With Trump, his presidential campaign and his businesses all under federal and state investigations, Pelosi’s approach to confronting him — both through investigation and legislation — will probably define the 116th Congress.

She wasted no time in doing so Thursday, hours after being sworn in.

The late-night, nearly party-line votes on reopening the government began a pattern in an era of divided control, with a Democratic House passing legislation that has no chance of being signed by the Republican president, and the Republican Senate running interference to protect Trump. The White House had also issued an official statement threatening a veto.

Trump used his abrupt appearance in the White House briefing room — his first since taking office — to talk about the importance of the wall; he was flanked by border agents who echoed his message.

The President congratulated Pelosi on her election and said he had high aspirations for the new Congress. But he turned immediately to making the case for a wall that Democrats have uniformly rejected, saying, “Without a wall, you cannot have border security.” Trump also used social media to press his message, posting on his Instagram account a photograph of his face with the text “The Wall Is Coming”, a take on an advertisement for the cable TV series Game of Thrones that bore the ominous slogan “Winter Is Coming.”

As afternoon turned to evening and the votes to reopen the government approached, Pelosi told reporters sarcastically, in response to a question, that she would give him $1 — but only that — for the wall.

That capped a day that began with a warning shot to Trump, suggesting that a sitting President could be indicted.

“I think that is an open discussion in terms of the law,” Pelosi said in an interview on NBC.

In a statement that served as a two-pronged warning, both to her left flank and to the president, she said the House would not move quickly to impeach Trump but would not shy away from doing so if it were warranted.

By early afternoon, partisan politics were put aside, if only briefly, for a transition of power from Republicans to Democrats, as a majority of lawmakers rose in turn from their seats on the House floor to utter Pelosi’s name and formally award her the gavel she gave up in 2011.

Pelosi ascended to the marble dais in the centrr of the House chamber with Rep. Kevin McCarthy of California, the incoming Republican leader, who handed her the wooden gavel.

“To the speaker of the House, Ms. Pelosi,” he said, “I extend to you the gavel.” The room erupted into applause as she held it aloft.

Moments later, with a “Come on, kids!” Pelosi invited the children and grandchildren of representatives on the floor of the House to surround her as she took the oath of office, becoming the first person since Rep. Sam Rayburn more than 60 years ago to reclaim the speakership after losing it.

“I now call the House to order on behalf of all of America’s children,” Pelosi said after she was sworn in. 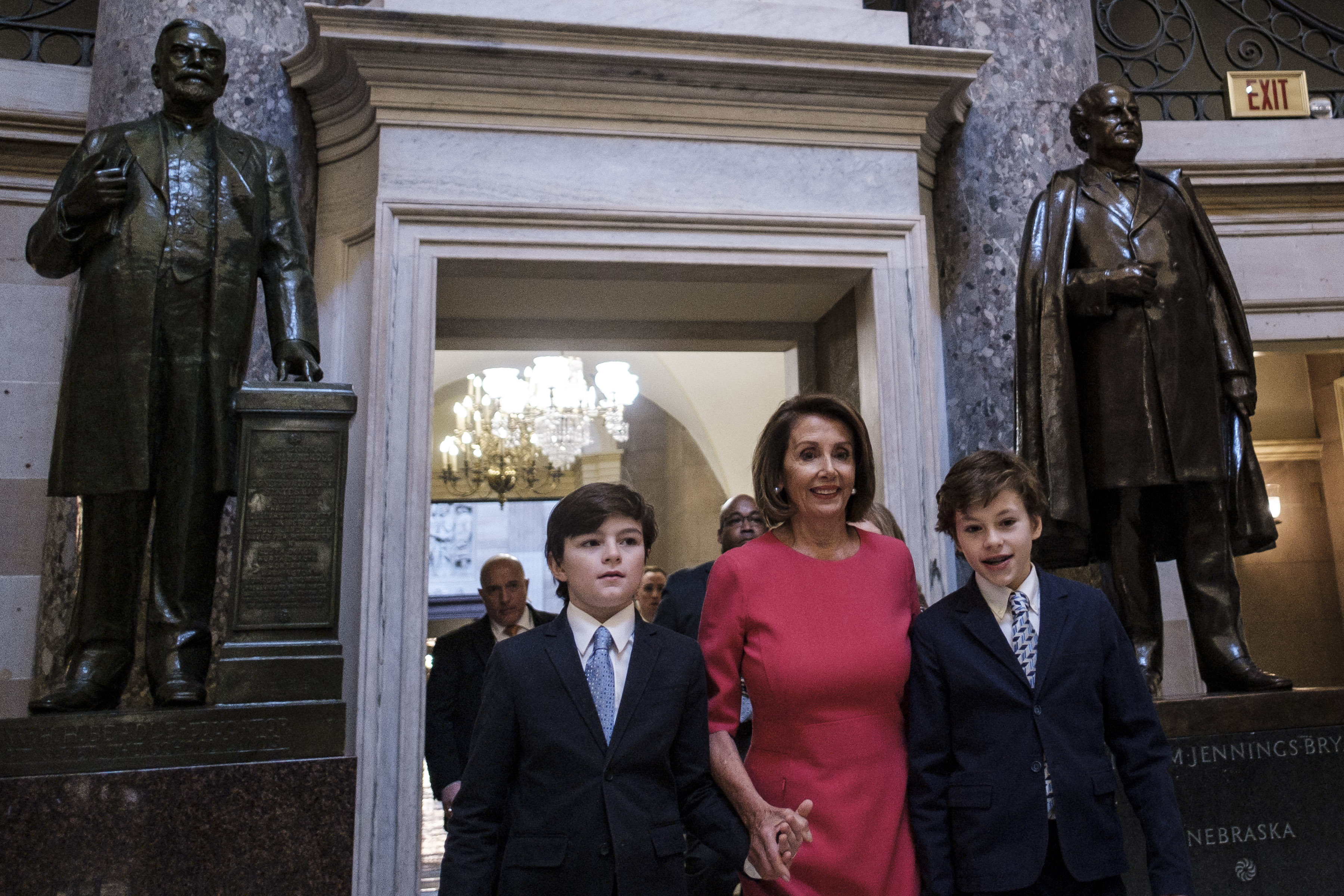 Nancy Pelosi is flanked by her grandsons Thomas (left) and Paul Vos as she walks to the House Chamber of the Capitol on Thursday.
The New York Times

As promised, Democrats approved bills intended to reopen the government and to remake rules of the House. One of the spending bills would fund most shuttered departments and agencies through Sept. 30, and the other is a stopgap measure to restart the Department of Homeland Security for a few weeks.

Earlier, they approved a suite of new rules that will set the tone for their majority, including a measure — opposed by liberal members — to require that any policy mandating new funding be accompanied with corresponding tax increases or spending cuts. Another change would automatically raise the statutory limit on the national debt when the House approves a budget, avoiding politically difficult votes each time the ceiling is reached, which dogged Republicans and led to a series of fiscal cliffhangers during their years in the majority.

Also included were revisions to ensure that bipartisan proposals could be more easily considered, pushed by a bipartisan group of lawmakers billing themselves the Problem Solvers Caucus.