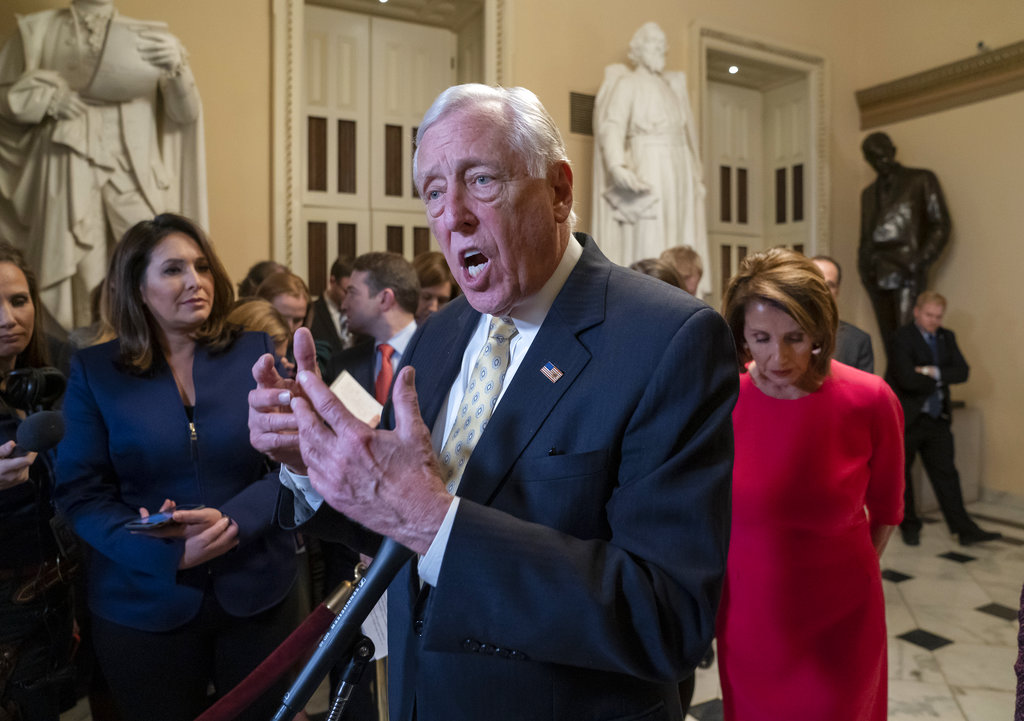 House majority leader Steny Hoyer (centre) and Speaker Nancy Pelosi push back on President Donald Trump's demand for funding to build a wall on the US-Mexico border as the partial government shutdown is in its second week, at the Capitol in Washington on Thursday.
AP
AP   |   Washington   |   Published 04.01.19, 09:42 AM

On their first day in the majority, House Democrats have passed a plan to re-open the government without funding President Donald Trump's promised border wall.

The largely party-line votes on Thursday night came after Trump made a surprise appearance at the White House briefing room, pledging to keep up the fight for his signature campaign promise.

House Speaker Nancy Pelosi said Trump and Senate Republicans should 'take yes for an answer' and approve the border bill, which was virtually identical to a plan the Senate adopted on a voice vote last month.

Pelosi, who was elected speaker earlier on Thursday, also took a shot at Trump, calling his proposal 'a wall between reality and his constituents'.

Trump strode into the White House briefing room on Thursday — the 13th day of the partial government shutdown —and declared that 'without a wall you cannot have border security'. He then left without taking questions from reporters.

Donald Trump during a briefing with reporters about border security at the White House on Thursday.
AP

The appearance came hours after the new Congress convened, with Democrats taking majority control of the House and returning Pelosi to the speakership after eight years of GOP control. The Democratic legislation to re-open the government without funding the wall is going nowhere in the Senate, where Republicans want Trump's endorsement before voting on a funding package.

Trump is demanding billions of dollars to build his wall along the US border with Mexico, which the Democrats have refused.

Asked if she would give Trump $1 for a wall to reopen the government, Pelosi said: 'One dollar? Yeah, one dollar. The fact is a wall is an immorality. It's not who we are as a nation.'

Congressional leaders from both parties met with Trump at the White House on Wednesday, but failed to make progress during their first sit-down in weeks. The White House has invited the leaders back Friday for another round of talks that officials have suggested might be more successful now that Pelosi has been sworn in.

Reporters were told on Thursday that White House press secretary Sarah Huckabee Sanders would be holding a hastily called late afternoon briefing. Instead, out walked Trump, flanked by members of the unions that represent border patrol and immigration enforcement agents. It was his first time delivering remarks at the briefing room podium.

'You can call it a barrier, you can call it whatever you want,' Trump said. 'But essentially we need protection in our country. We're going to make it good. The people of our country want it.'

Sadly, there can be no REAL Border Security without the Wall!

Trump said his meeting with the union officials had long been planned and just happened to come at 'a very opportune time'. He also claimed his refusal to budge was winning praise, telling reporters, 'I have never had so much support as I have in the last week over my stance for border security.'

Polls show a majority of Americans oppose the border wall, although Republicans strongly support it.

White House and Department of Homeland Security officials have spent recent days trying to make a public and private case that the situation at the border has reached a 'crisis' situation that demands more money than Democrats have offered.

Trump tweeted an ominous video on Thursday with images of what appeared to be migrants trying to rush the border and clashing with law enforcement, beneath the words 'crisis at the border,' ''drugs' and 'crime.' The video concludes with footage of Trump at the border along with audio from one of his rallies in which he vows to build his promised border wall and the crowd chants 'Build the wall!'

The Democratic package to end the shutdown includes a bill to temporarily fund the Department of Homeland Security at current levels — with $1.3 billion for border security, far less than Trump has said he wants— through February 8 as bipartisan talks would continue. It was approved, 239-192.

Democrats also approved a separate measure to fund the departments of Agriculture, Interior, Housing and Urban Development and others closed by the partial shutdown, at levels Senate Republicans had largely agreed to last year. The bill, which would provide money through the end of the fiscal year September 30, was approved, 241-190, with several House Republicans joining Democrats.

The White House has rejected the Democratic package.

'Why not fully fund the Department of Homeland Security? Why doesn't the Pelosi bill do that?' said White House counselor Kellyanne Conway.

Senate Democratic Leader Chuck Schumer urged Majority Leader Mitch McConnell to put the House Democratic package on the Senate floor and send it to the President, saying it would show Trump 'the sweet light of reason'.

McConnell has dismissed the idea as a 'total nonstarter' and a waste of time.

But some Republican senators appeared open to at least part of the Democrats' proposal.

'I'm not saying their whole plan is a valid plan, but I see no reason why the bills that are ready to go and on which we've achieved an agreement should be held hostage to this debate over border security,' said Sen. Susan Collins, R-Maine.

'Congress needs to take further action on border security, but that work should be done when the government is fully open,' added Sen. Cory Gardner, R-Colo.

Vice-President Mike Pence, who was on the Hill on Thursday to swear in new senators, took a hard line, telling Fox News Channel's Tucker Carlson, 'Bottom line, if there's no wall, there's no deal.'

Trump has said the partial shutdown, which began on December 22, will last 'as long as it takes' to get the funding he wants.

The White House said Trump made calls on Thursday to the family of Cpl. Ronil Singh, the Newman, California, police officer shot to death during a December 26 traffic stop. The suspected shooter is a Mexican man accused of living in the US illegally. Republicans have seized on the case to call for tougher border security.