Security forces shot dead at least 20 people on Monday after 74 were killed a day earlier, including many in a suburb of Yangon where Chinese factories were torched 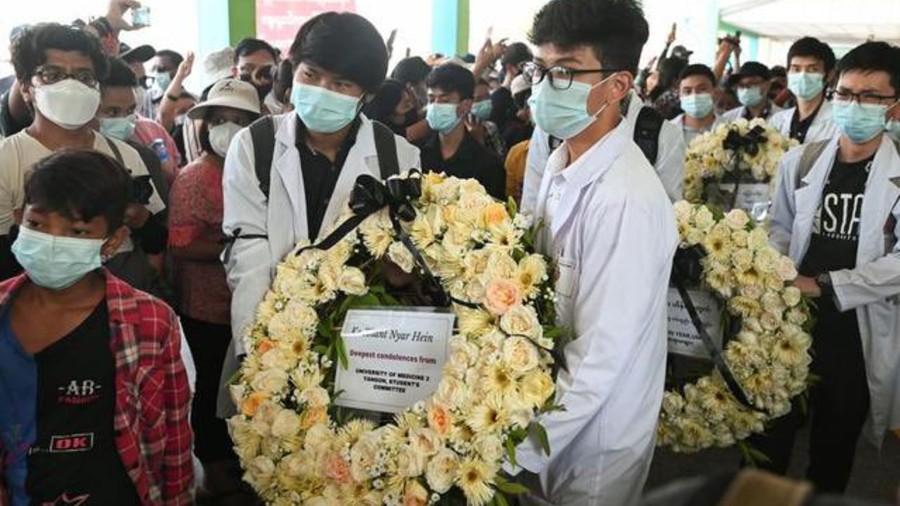 Mourners, including many fellow medical students in white lab coats, chanted: “Our revolution must prevail.”
Twitter/ @kyawhsanhlaing1
Reuters   |   Published 17.03.21, 02:33 AM

The families of dozens of people killed in demonstrations against military rule in Myanmar attended their funerals on Tuesday as more protesters defied the security forces and at least one man was shot dead.

The political and economic crisis over the February 1 overthrow of Aung San Suu Kyi’s elected government could also force the poor into hunger as food and fuel prices rise, the UN food agency said.

Security forces shot dead at least 20 people on Monday after 74 were killed a day earlier, including many in a suburb of Yangon where Chinese-financed factories were torched, according to advocacy group the Assistance Association for Political Prisoners .

On Tuesday, a crematorium in Yangon reported 31 funerals, a mourner at one of the ceremonies said.

Hundreds of young mourners spilled out on to the street at the funeral of medical student Khant Nyar Hein who was killed in Yangon on Sunday, the bloodiest day of the protests.

“Let them kill me right now, let them kill me instead of my son because I can’t take it any more,” the student’s mother was seen saying in a video clip posted on Facebook.

Mourners, including many fellow medical students in white lab coats, chanted: “Our revolution must prevail.”

Some families told media the security forces had seized the bodies of victims, but they would still hold a funeral.

At least 184 people have been killed by the security forces in the weeks of protests, the AAPP said.

UN secretary-general Antonio Guterres was appalled by the escalating violence and called on the international community to help end the repression, his spokesman said, while the US also denounced the bloodshed.  “The military is attempting to overturn the results of a democratic election and is brutally repressing peaceful protesters,” US secretary of state Antony Blinken said.