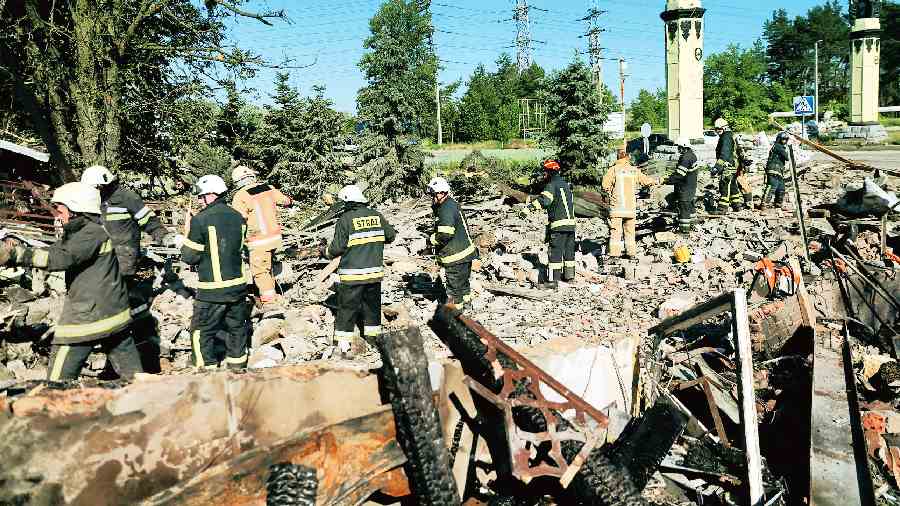 Firefighters look for bodies after a Russian military strike in Kharkiv.
Reuters
Austin Ramzy   |   Published 14.06.22, 01:08 AM

Russian forces killed hundreds of civilians in the Ukrainian city of Kharkiv by bombarding residential neighborhoods with rockets and cluster munitions, Amnesty International said in a new report on Monday.

The repeated attacks were indiscriminate “and as such constitute war crimes”, Amnesty said. Cluster munitions dispense smaller bomblets over a wide area, often leaving behind unexploded ordnance that can pose long-term risk to noncombatants.

The report adds to evidence of a widespread civilian deaths since Russia invaded Ukraine in February. The UN human rights office said last week it had documented 4,339 civilian deaths and 5,246 injuries in Ukraine since the start of the war. The office said it believed the actual totals were much higher, but it was unable to receive accurate counts from areas where fighting remained intense.

Ukrainian officials have said as many as 20,000 civilians may have been killed during the weeks-long siege of Mariupol. Satellite imagery has shown expanding mass burial sites outside the city.

Kharkhiv remains under Ukrainian control, but its location near the Russian border in the northeast of the country has made it a target since the start of the war. Amnesty said 606 civilians were killed in the Kharkiv region between February 24 and April 28, citing the head of the regional medical department.

In investigating 41 strikes that killed more than 60 civilians, Amnesty said its researchers found fragments of cluster sub-munitions as well as parts of rockets known to carry such weapons. Cluster munitions are banned under a 2010 treaty because of the risk they pose for non-combatants, but Russia, Ukraine and the US are not among the more than 100 countries that have signed the convention.

“The continued use of such inaccurate explosive weapons in populated civilian areas, in the knowledge that they are repeatedly causing large numbers of civilian casualties, may even amount to directing attacks against the civilian population,” the report said.