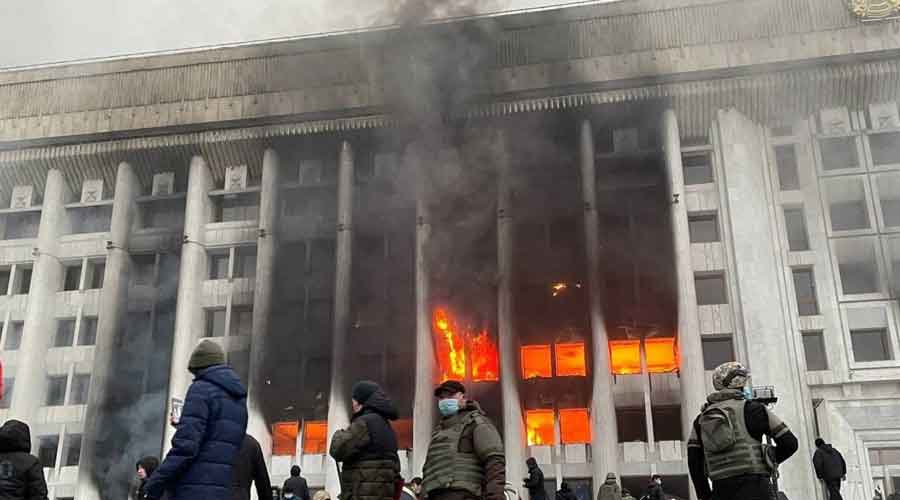 Kazakhstan’s former intelligence chief has been arrested on suspicion of treason, the state security agency said on Saturday, as the former Soviet republic cracks down on a wave of unrest and starts to assign blame.

The detention of Karim Massimov was announced by the National Security Committee which he himself headed until he was fired by President Kassym-Jomart Tokayev on Wednesday as violent protests swept across the Central Asian nation.

Tokayev’s office said he had told Russian President Vladimir Putin in a phone call that the situation was stabilising.

“At the same time, hotbeds of terrorist attacks persist. Therefore, the fight against terrorism will continue with full determination,” it quoted him as saying.

The Kremlin said Putin backed Tokayev’s idea to convene a video call of leaders from the Collective Security Treaty Organisation (CSTO), under whose umbrella Russia and four other former Soviet republics have sent troops into Kazakhstan to help restore order. It was not clear when this would take place.

Dozens of people have died, thousands have been detained and public buildings across Kazakhstan have been torched over the past week in the worst violence experienced in the major oil and uranium producer since it became independent in the early 1990s as the Soviet Union collapsed.

Tokayev has ordered his troops to shoot to kill to put an end to what he has called attacks by bandits and terrorists.

He said on Friday the state had “slept through” instigators’ preparations to launch attacks on the biggest city, Almaty, and across the country. The arrest of Massimov indicated that moves against those deemed responsible are under way.

Apart from heading the intelligence agency that replaced the Soviet-era KGB, Massimov is a two-time
former Prime Minister who worked closely with former President Nursultan Nazarbayev, the country’s ruler for three decades until he turned over the presidency to Tokayev in 2019.