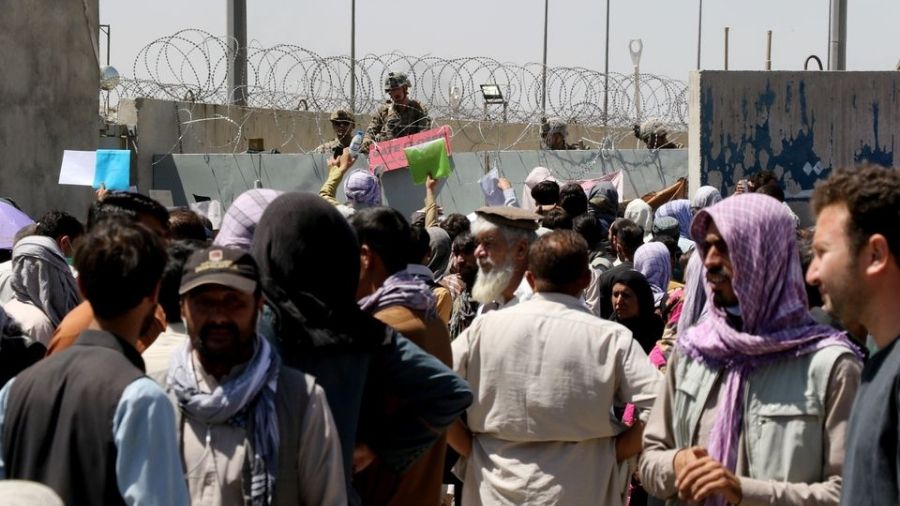 At least 170 people, excluding 13 American troops, were killed in Thursday’s attack at the gate to Kabul airport by one suicide bomber
File picture
John Chalmers, Sabine Siebold   |   Published 28.08.21, 01:50 AM

The deadly attack on Kabul airport has underlined the realpolitik facing western powers in Afghanistan: engaging with the Taliban may be their best chance to prevent the country sliding into a breeding ground for Islamist militancy.

At least 170 people, excluding 13 American troops, were killed in Thursday’s attack at the gate to Kabul airport by one suicide bomber, The New York Times reported, quoting local health officials. Witnesses had said they heard two blasts but the Pentagon said on Friday that there was one explosion.

The attack was claimed by Islamic State militants. The Islamic State’s Afghan affiliate, ISIS-Khorosan (ISIS-K), has emerged as an enemy of both the West and of the Taliban.

A Taliban official said the dead included 28 Taliban members, although a Taliban spokesman later denied that any of their fighters guarding the airport perimeter had been killed.

General Frank McKenzie, head of US Central Command, said some intelligence was being shared with the Taliban and he believed “some attacks have been thwarted by them”.

Yet, less than a day after the attack, crowds on Friday sought once again to reach the airport, their desperation to flee the Taliban blending with grief at the enormous scale of the violence.

The grisly scenes on Thursday, when children were among those killed in the crowds, illustrated the intense danger for those braving the high-risk journey to the airport.

The local health officials said as many as 170 people were killed, which did not include the US military casualties, and at least 200 were wounded in Thursday’s attack. The revised estimates made Thursday’s attack one of the deadliest in the nearly two decades since the US-led invasion.

At the airport and in the streets, the US military and the Taliban tried to exert what authority they could. Militants with rifles kept crowds farther away from the airport’s entrance gates, guarding checkpoints with trucks and at least one Humvee parked in the roads.

The American military resumed evacuation flights. Most of the more than 20 allied countries involved in airlifting Afghans and their own citizens out of Kabul said they had completed evacuations by Friday.

The US said it would continue airlifting people right up to next Tuesday (the current deadline) but will prioritise the removal of American troops and military equipment on the last couple of days.

An estimated hundreds of thousands remain in the country who are desperate for escape from the Taliban rule of Afghanistan, but very few appeared to be getting to the airport gates on Friday. The waiting crowds, many standing by buses with bags at their sides, numbered in the hundreds, not the thousands of previous days.

The airport itself appeared to be largely, if not entirely, locked down. About 5,400 people remained inside awaiting evacuation, the Pentagon said on Friday.

Almost two weeks after the Taliban’s surprise return to power, officials in Europe are beginning to acknowledge that their pragmatic option is to put aside distaste for the country’s new leaders and work with them instead.

“It is clear: the Taliban are reality in Afghanistan now,” German Chancellor Angela Merkel said this week. “This new reality is bitter, but we have to work with it.”

A senior European Union official said it was not enough for G7 powers to take the moral high ground and adopt an aggressive stance towards the Taliban, not least because that would hand China and Russia greater say over the future of the country.

He said that in recent days, Pakistan and Turkey have urged western nations “not to corner the new regime too quickly”, to hold off imposing sanctions on Kabul and keep channels of discussion open to avert a security and migration meltdown that could have ripple effects across the globe.

Washington does not appear to have come around to the view held in European capitals that the Taliban is the least bad option.

The US’s unruly retreat from Afghanistan after 20 years trying to bring it stability and democracy has been, in the words of former US ambassador to Afghanistan Ryan Crocker, “an enormous morale boost” for Islamist radicals everywhere.

The suicide bombing outside Kabul airport on Thursday was a reminder that extremist militants could gain a foothold if the country was allowed to implode.

Thomas Ruttig, co-Director of the Afghanistan Analysts Network, said there may be no appetite in the West to “cosy up” with the Taliban, but “confronting and lecturing” them from the outset will not help vulnerable Afghans.

Germany, in particular, appears to be taking that approach.  Its former envoy to Afghanistan, Markus Potzel, is in talks with the Taliban representative in Doha to keep Kabul airport operating for evacuations after the August 31 cut-off date.

German foreign minister Heiko Maas will travel to the region for talks in Tajikistan, Uzbekistan, Pakistan, Turkey and Qatar on “how the international community can handle Afghanistan now”, according to a letter from his ministry to parliament.

France has held talks with representatives of the Taliban in recent days in Kabul and in Doha to ease its ongoing evacuations from the Afghan capital, the foreign ministry said in Paris on Friday.

IS and Qaida still a threat