In searing remarks from the East Room of the White House, the US president pledged to 'hunt down' the terrorists who claimed credit for the Kabul airport bombings 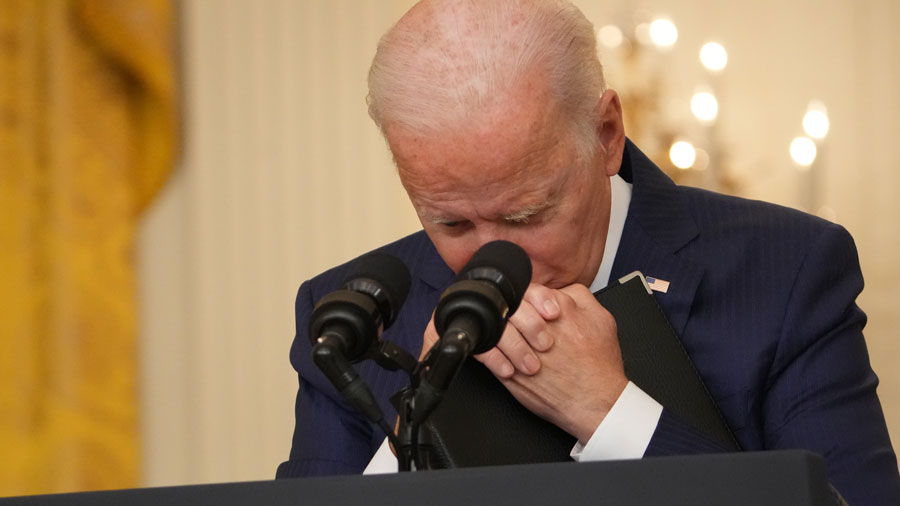 President Joe Biden listens to a question from a reporter at the White House in Washington on Thursday, Aug. 26, 2021, while speaking about the unfolding situation in Afghanistan, after explosions caused casualties and rattled the area outside Hamid Karzai International Airport in Kabul.
Doug Mills/The New York Times
Michael D. Shear   |   Washington   |   Published 27.08.21, 07:19 PM

It was exactly what President Biden feared most.

His decision to end America’s longest war was driven, he had said repeatedly, by his determination not to sacrifice even one more member of the military on behalf of an effort he had long believed was no longer in the interests of the US.

But on Thursday morning, the withdrawal he set in motion claimed the lives of 13 US troops, along with 79 Afghan civilians — the first American casualties in Afghanistan in 18 months and the deadliest day there for the US military since 2011.

In searing remarks from the East Room of the White House Thursday evening, Biden pledged to “hunt down” the terrorists who claimed credit for the bombings at the Kabul airport but said the frantic, dangerous evacuation of US citizens and allies from Afghanistan would continue for several more days.

“To those who carried out this attack, as well as anyone who wishes America harm, know this: We will not forgive,” Biden said, using language that had grim echoes of warnings President George W. Bush made after the terrorist attacks on September 11, 2001. “We will not forget. We will hunt you down and make you pay.”

America’s tumultuous exit from Afghanistan has dragged down Biden’s approval ratings, and the bombings on Thursday surely will open him up to political criticism. But it was unclear what the damage would be to his presidency in the long term, as he exits a war that most Americans want out of as well.

Before the attacks, the President’s aides said privately that they did not believe there would be long-term political damage to Biden, especially as the military successfully evacuated more than 100,000 people in less than two weeks. But the deaths of American service members — and scores of Afghans — could scramble those calculations.

The President’s Republican critics seized on the bombings and vowed to hold him accountable for the consequences of his decision to withdraw troops from Afghanistan.

“It was the direct result of horribly misguided decisions from President Biden. This demands painful accountability,” said Representative John Katko of New York, the top Republican on the Homeland Security Committee. “Our commander in chief has been missing in action and has failed to rise to this pivotal moment in our history.”

Few Democratic lawmakers jumped to defend Biden in the hours after the attacks. Instead, most expressed grief over the loss of life in Kabul.

“I am angered by the despicable terrorist attacks at Hamid Karzai Airport,” said Senator Jack Reed, Democrat of Rhode Island. “Today’s loss of life is tragic.”

Biden delivered his remarks about the bombings hours after the Pentagon confirmed suicide bombers had inflicted the deadliest attack on US forces in Afghanistan in a decade. He expressed “heartache” for what he described as “a tough day”, and said he had asked his commanders to target IS-K, the Afghan affiliate of the Islamic State, which claimed responsibility for the attacks.

“We will respond with force and precision, at the place we choose and the moment of our choosing,” he said.

Biden hailed the sacrifice of the soldiers, 12 of whom were Marines, who lost their lives, and the 18 other American service members who were injured in the blasts, even as the military worked to carry out his decision to fully withdraw from Afghanistan.

He pledged that the US would uphold its “sacred obligation” to the families of the fallen in Afghanistan, calling those who died in the attacks “heroes who have been engaged in a dangerous mission to save the lives of others”.

Biden said that as President, he bore responsibility for “all that’s happened”, but he again denied that his decision to withdraw forces by the end of the summer led inevitably to the chaotic scenes of evacuation at the airport, or to the deaths at the hands of the terrorists.

“I had only one alternative: pour thousands of more troops back into Afghanistan,” he said. “I have never been of the view that we should be sacrificing American lives to try to establish a democratic government in Afghanistan.”

But that is unlikely to satisfy his critics, including some members of his own party, who disagreed with the way Biden brought an end to the war.

On Thursday morning, as word of the attacks spread, Senator Bob Menendez, Democrat of New Jersey and the chairman of the Foreign Relations Committee, called the situation in Kabul “a full-fledged humanitarian crisis”. He said the Biden administration must complete the evacuation as planned.

Acting against the advice of his generals and overruling some of his top foreign policy advisers, Biden announced in April his decision to withdraw the remaining 2,500 American troops from the country. The President has said that he did not want to call the parents of another Marine, soldier or airman killed in action in Afghanistan.

But the rapid takeover of the country by the Taliban caught the administration off guard and set in motion a chaotic evacuation in which almost 6,000 American troops tried to secure the Kabul airport against the Taliban and terror groups. Earlier this week, Biden rejected calls from lawmakers, activists and other world leaders to extend the American presence at the airport past August 31, citing the potential for attacks.

Since August 14, just before the Taliban seized control of Kabul, the administration says it has evacuated more than 100,000 people, ferrying them to safety. But administration officials concede that there are still more Americans and Afghan allies that want to leave the country.

On Thursday, Biden said he still intended to meet his August 31 deadline for a full withdrawal. But he also said he would not accelerate the departure because of the bombings. He said his top military officials had told him they had the resources to continue the evacuations even in the face of ongoing threats while also protecting the airport from what they expected would be more attacks in the days ahead.

And he said continuing the evacuation would prove to the rest of the world that “what America says matters”.

“They made it clear that we can and we must complete this mission and we will, and that’s what I’ve ordered them to do,” Biden said of his military advisers. “We will not be deterred by terrorists. We will not let them stop our mission. We will continue the evacuation.”

Afghans with valid documents will be able to travel freely in the future at any time, a senior Taliban official said on Friday in a televised address aimed at calming fears the movement planned harsh restrictions on freedom.

Biden said that the US would continue to try to help Americans and others escape Afghanistan after the military leaves the country, in part by seeking to cooperate with the Taliban in bringing them out. He said that the Taliban, at least for now, appeared to be interested in cooperating with the US and other western nations.

No deadline to our work: US