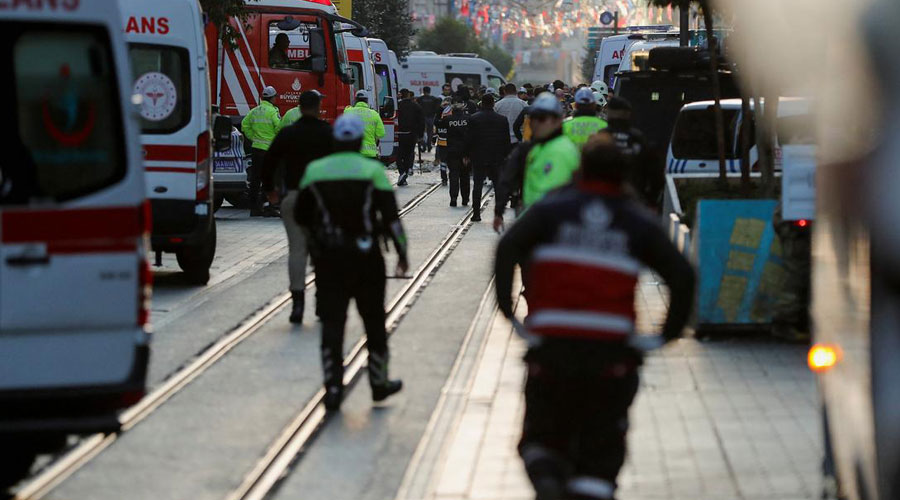 Dozens of people were also injured in the blast on the iconic thoroughfare of Istiklal
Deutsche Welle
Deutsche Welle   |   Published 14.11.22, 09:31 AM

Interior Minister Suleyman Soylu told Turkey's state Anadolu news agency on Monday that the person who planned a deadly attack in central Istanbul had been arrested and claimed the Kurdish PKK group was behind the blast.

"According to our findings, the PKK terrorist organisation is responsible," Soylu said.

At least six people were killed and 81 injured Sunday by the bombing, according to Turkish authorities.

"It would be wrong to say this is undoubtedly a terrorist attack but the initial developments and initial intelligence from my governor is that it smells like terrorism," he told a news conference.

Turkish Vice President Fuat Oktay later said he assumed the blast was a "terrorist attack" that appeared to have been carried out by a woman.

Anadolu reported that five prosecutors were assigned to investigate the cause of the blast.

Videos shared on social media showed multiple people on the ground amid blast damage. The footage showed an ambulance and police arriving on the scene.

"I was 50-55 meters (yards) away, suddenly there was the noise of an explosion. I saw three or four people on the ground," witness Cemal Denizci, 57, told AFP news agency. "People were running in panic. The noise was huge," he said.

On social media, users said Istiklal Street, just off Taksim Square, was cordoned off as shops were closed. A Reuters news agency reporter observed a helicopter over the blast scene.

Turkey's media watchdog, the Supreme Board of Radio and Television, imposed temporary restrictions on reporting about the blast and its aftermath shortly after the incident. In the past, such restrictions have been in place following similar incidents.

Istiklal Street runs through the central district of Beyoglu, home to many foreign residents and is frequented by tourists. Previously in 2016, a suicide bomber detonated on Istiklal, killing four and injuring 39.

German President Frank-Walter Steinmeier expressed his condolences to Erdogan. "My thoughts are with the victims and their families, and my wishes for recovery go out to all those injured." Steinmeier wrote Sunday, according to a statement from his office.

"In this moment of shock, we Germans stand by the citizens of Istanbul and the Turkish people."

German Foreign Minister Annalena Baerbock also said: "My thoughts are with the people who simply wanted to stroll on the Istiklal shopping street on a Sunday and have now become victims of a serious explosion."

"Our thoughts are with those who were injured and our deepest condolences go to those who lost loved ones," a White House statement said. The statement said that the US stood "shoulder-to-shoulder" with Turkey in fighting terrorism.

"On this meaningful day for our nation, just as we commemorate those who lost their lives on November 13, 2015, the Turkish people were attacked from their heart, from Istanbul," Macron said, referring to attacks on the Bataclan theater and other parts of Paris claimed by the so-called "Islamic State" militant group seven years ago.

"We share your pain. Our condolences. We are with you in the fight against terrorism," he said.