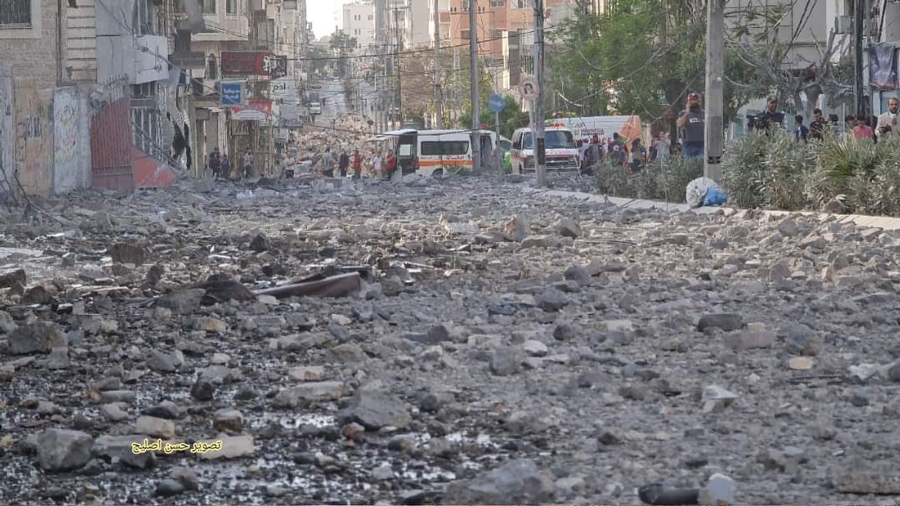 This is how Al-Wehda street, one of the busiest streets in Gaza, look like after the Israeli consecutive strikes over the last two days.
Twitter/ @RamAbdu
Iyad Abuheweila, Patrick Kingsley   |   Gaza City   |   Published 18.05.21, 12:32 AM

Diplomats and international leaders were unable on Sunday to mediate a ceasefire in the latest conflict between Israel and Hamas, as Prime Minister Benjamin Netanyahu of Israel vowed to continue the fight and the UN Security Council failed to agree on a joint response to the worsening bloodshed.

The diplomatic wrangling occurred after the fighting, the most intense seen in Gaza and Israel for seven years, entered its deadliest phase yet. At least 42 Palestinians were killed early on Sunday morning in an airstrike on several apartments in Gaza City,

Palestinian officials said, the conflict’s most lethal episode so far.

Explosions rocked the city from north to south for 10 minutes in an attack that was heavier, that covered a wider area and that lasted longer than a series of air raids 24 hours earlier in which the 42 Palestinians were killed — the deadliest single attack in the latest round of violence between Israel and Hamas, the Islamist militant group that rules Gaza. The earlier Israeli airstrikes flattened three buildings.

Local media reports said among the targets that were hit early Monday were the main coastal road west of Gaza City, security compounds and open spaces. The power distribution company said the airstrikes damaged a line feeding electricity from the only power plant to large areas in the southern part of the city.

There were no immediate reports of injuries.

The number of people in killed in Gaza rose to 197 over the seven days of the conflict, according to Palestinian officials, while the number of Israeli residents killed by Palestinian militants climbed to 11, including one soldier, the Israeli government said.

On Sunday afternoon, the street bombed in the airstrike made for a desperate scene as Anas al-Yazji, a graphic designer, clambered over the rubble, searching for his fiancée, Shaimaa Abul Ouf. There was a wallet squeezed between the fragments of the shattered walls, a necklace, a Quran, even a few handbags.

But 12 hours after Israel struck the building — aiming, the Israeli Army said, at an underground Hamas tunnel network — there was still no sign of Abul Ouf.

“I will wait here until we find her,” al-Yazji, 24, said as a yellow digger shovelled rubble from one pile to another. “Then I will bury her.”

By nightfall, the fighting showed no sign of letting up.

“Citizens of Israel,” Netanyahu said in a speech on Sunday afternoon at the headquarters of the Israeli Army in Tel Aviv, “our campaign against the terrorist organisations is continuing with full force”.

He added: “We want to exact a price from the aggressor, as in all types of terrorism. To restore the quiet and security and to rebuild deterrence and governance will take time.”

Netanyahu’s pledge came amid rising international criticism of Israeli airstrikes in Gaza, which began last Monday after Hamas fired rockets at Jerusalem following a month of rising tensions between Palestinians and Israelis in the holy city.

The Israeli Army says its goal is to destroy the military infrastructure of Hamas, which controls the Gaza Strip, a Palestinian enclave of about two million people that is under an Israeli and Egyptian blockade. Israel blames Hamas for the civilian casualties in Gaza, saying the group hides militants in residential areas.

That explanation came under intense scrutiny over the weekend when Israeli jets destroyed a tower in Gaza City that housed two major international news outlets, The Associated Press and Al Jazeera, after calling the building’s owner and telling him to evacuate tenants. An Israeli strike also killed at least 10 members of the same family in a house in a refugee camp and caused collateral damage to a clinic run by Doctors Without Borders, a medical aid group.

Then on Sunday morning, the airstrike hit Abul Ouf’s home.

Two relatives said that the strike killed two members of her immediate family, at least 12 of her extended family and more than 30 neighbours, and that it left her mother in critical condition.

In a statement, the Israeli Army said it had “struck an underground military structure belonging to the Hamas terrorist organisation which was located under the road”. It added: “Hamas intentionally locates its terrorist infrastructure under civilian houses, exposing them to danger. The underground foundations collapsed, causing the civilian housing above them to collapse, causing unintended casualties.”