Glimpses of celebrations from Singapore, Nepal, Boston and Israel pour in 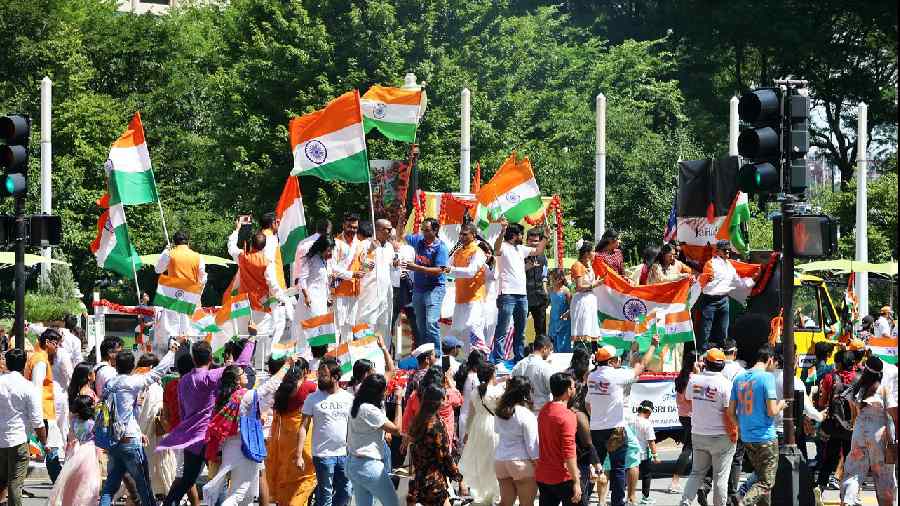 Indians across the world on Monday enthusiastically celebrated the 75th anniversary of India's Independence by hoisting the tricolour and singing the national anthem and patriotic songs at the country's missions.

After the flag hoisting, Rawat read out President Droupadi Murmu's address to the nation.

In the southern Chinese city of Guangzhou, Indian Consulate General Shambhu Hakki who is also a musician by passion released his latest song Sabse Pyara Desh Mera, a musical tribute to India on its 75th Independence Day.

In the UK, Prime Minister Boris Johnson led India's 75th Independence Day celebrations with a throwback image from Sabarmati Ashram during his visit to Gujarat earlier this year.

"Congratulations to the people of India on 75 years of independence," he said.

Congratulations to the people of India on 75 years of independence.

During my recent visit to Gujarat and New Delhi I saw for myself the thriving Living Bridge between our countries. I look forward to seeing these bonds go from strength to strength in the next 75 years. pic.twitter.com/4G3RcUBUsS

The special 75th anniversary of Independence celebrations in the UK also includes the arrival of INS Tarangini at the West India Docks at Canary Wharf in east London, welcomed with an enthusiastic diaspora turnout on Sunday.

In Singapore, a 16-member band from the patrol vessel INS Saryu played patriotic songs at the Indian High Commission in the country as part of the Indian Navy's initiative to celebrate Azadi ka Amrit Mahotsav across six continents.

Students from Indian schools danced to tunes of patriotic songs

It was the first in-person post-Covid celebration that overwhelmed the chancery.

Contingents from all three services of the Indian Armed Forces participated for the first time in the flag hoisting at the Indian High Commission.

In Nepal, the 75th Independence Day celebrations began with the hoisting of the national flag by Counsellor Shri Prasanna Shrivastava.

This was followed by the reading of the address to the nation from President Murmu.

The embassy felicitated widows and next of kin of deceased Gorkha soldiers of the Indian Armed Forces by disbursing their dues worth NPR 2.65 crore.

The mission also awarded the winners of the Azadi Ka Amrit Mahotsav Quiz organised by the Ministry of External Affairs to motivate overseas Indian youth and foreign nationals to enhance their knowledge about India.

The celebrations witnessed renditions of patriotic songs and performances by teachers and students of Swami Vivekananda Cultural Centre of the Embassy and Kendriya Vidyalaya School, Kathmandu.

In Herzliya, Tel Aviv, India's Ambassador to Israel, Sanjeev Singla, unfurled the tricolor to celebrate 75th Independence Day in the presence of about 300 people from the Indian community, emphasising on "efforts to deepen" the strategic relationship between the two nations.

People from the Indian Jewish community, Indian students and NRIs turned up from all over Israel to celebrate Independence Day despite it being a working day.

After reading out the message of President Murmu, the Indian envoy in his address to the Indian community said, "With your help, we continue to deepen our strategic relationship with Israel."

In the UAE, the Indian Ambassador, Sunjay Sudhir, hoisted the tricolour.

"A sea of pride, a wave of #Hindustan with the Indian community in the UAE!," the Indian mission in Abu Dhabi tweeted.

Amb @sunjaysudhir hoisted the Tricolor #HarGharTiranga . A sea of pride, a wave of #Hindustan with the Indian community in the UAE! pic.twitter.com/HUTGGWv3kw

A flag hoisting ceremony was also held at the Indian High Commission in Dhaka to celebrate the 76th Independence Day of India.

Indian High Commissioner to Bangladesh Vikram Doraiswami read out the President's address to over 1500 Indian citizens studying and working in the country.

Indian High Commission in Ottawa, Canada joined hands with The Great India Festival which promotes multicultural understanding by showcasing the culture and heritage of India through multifaceted programmes, to present an exhilarating performance by fusion troupe Red Baraat.

High Commissioner of India to the Maldives Munu Mahawar also hoisted the national flag on the occasion of the 76th Independence Day of India.

In the US city of Boston, a 220-feet US-India flag flying high in the sky attracted everyone's attention during the first-ever India Day Parade to mark the 75th anniversary of the country's independence.

Pride in freedom to fly the flag