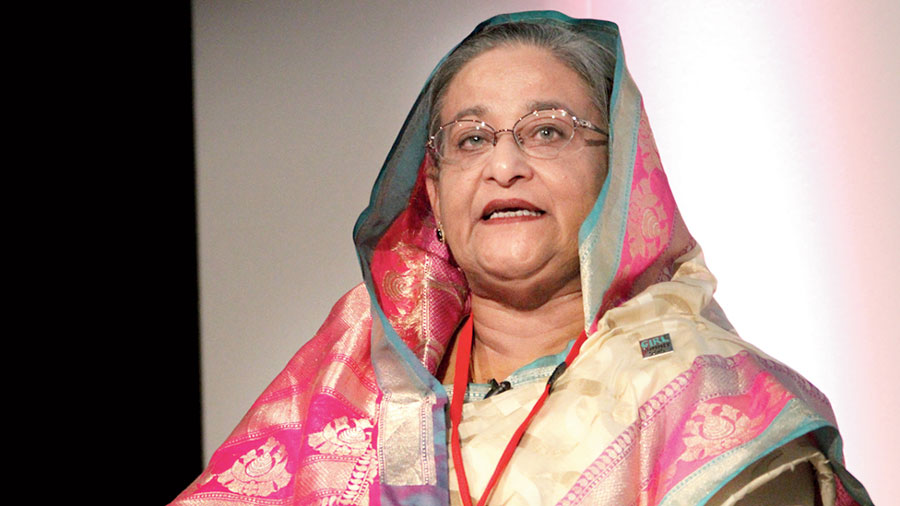 Bangladesh Prime Minister Sheikh Hasina on Thursday said neighbouring countries like India should also be vigilant to ensure that religion is not used to divide people, against the backdrop of communal clashes in several parts of her country during Durga Puja.

“You all know that those who came to power in our country after 1975 used religion to divide people.… The rise of global terrorism also has had its impact on our country. Countering this is not only our responsibility, and neighbouring countries like India should also remain vigilant,” Hasina said while exchanging greetings with Hindus on the occasion of Durga Puja. The Prime Minister had joined in virtually from her Gono Bhaban residence in Dhaka.

“India did help us in the liberation war (of 1971) and we will remain ever grateful for the support.… But they (India) have to be aware that such incidents should not take place there which would have an impact on Bangladesh, and the Hindus in our country face attacks,” Hasina added.

The Bangladesh Prime Minister did not link the attacks on Hindu temples and puja pandals in the past 36 hours to any specific incident in India. Four persons are reported to have died in the violence.

However, Hasina’s observations have come at a time when there is a growing perception in Muslim-majority Bangladesh that the condition of the community in India has worsened since the change of guard in Delhi in 2014.

“While the Hasina government is committed to the principles of secularism and she has taken prompt action to ensure that the situation doesn’t spiral out of control, her comments made it clear that she was trying a balancing act by suggesting that incidents in India do have a bearing on Bangladesh,” said an observer in Dhaka.

Several recent developments in India — from the new citizenship regime brought by the Narendra Modi government to the scrapping of Jammu and Kashmir’s special status by diluting Article 370 — are perceived as anti-Muslim measures by the majority in Bangladesh, where fundamentalist forces have been gaining ground over the past few years.

“Hasina has always dealt firmly with fundamentalists…. In keeping with this tradition, she has taken prompt action after the clashes over Durga Puja. The fact that she joined a programme to wish the Hindus during Durga Puja is a very strong message to the community, which had been feeling insecure after the attacks,” the observer said

Several prominent Hindu leaders also praised the Hasina government for initiating quick administrative action — elite Border Guard Bangladesh troops were deployed in 22 districts to provide security to puja pandals and temples and 43 people were arrested — after the attacks in Cumilla and several other places in the Chittagong range.

Hasina said 32,118 Durga pujas were being organised in Bangladesh this year and her government was making all efforts to provide security to the organisers.

“The number of pujas is more this year.… The law-enforcing agencies always provide security to the big pujas, but a lot of small pujas also take place and it is sometimes difficult to provide security to them. In India, I mean in Calcutta, pujas are held subject to permission from the government. We don’t have such provisions here.... I would urge the Bangladesh Puja Ujjapon Committee to consider whether they should frame some guidelines for organisers so that the administration is aware of all the pujas,” the Prime Minister said during the online event.

Hasina also urged the Hindus in Bangladesh not to consider themselves as “minorities”.

“This land belongs to you, you have your rights. Don’t consider yourselves as minorities, you should have this confidence,” she said.

Her message and the administrative action has calmed the situation in areas such as Cumilla, Narsingdi and Munshiganj, but some Hindu community leaders said the real test would be on Friday.

“We have received threats that there would be more attacks after Friday prayers and we are very worried.… In some places, the attacks were carried out by people who are part of the (ruling) Awami League establishment and that’s why the administration didn’t do anything. The Prime Minister may be earnest in protecting the Hindus, but the question is whether everyone in the Awami League also believes in the principles of secularism,” said a Chittagong-based Hindu businessman who preferred anonymity.

India on Thursday acknowledged the prompt action taken by the Bangladesh government after the attacks.

Asked for a reaction on the attacks on puja pandals, Indian external affairs ministry spokesman Arindam Bagchi said: “We have seen some disturbing reports of untoward incidents involving attacks on religious gatherings in Bangladesh. We note that the government of Bangladesh has reacted promptly to ensure control of the situation, including the deployment of law-enforcement machinery.

“We also understand that the ongoing festive celebration of Durga Puja continues in Bangladesh with the support of government of Bangladesh agencies and, of course, the large majority of the public. Our embassy and consulates are in close contact with the authorities in Dhaka and at the local levels.”

Since Durga Puja pandals came up earlier this week, the Indian high commission in Dhaka had been posting images of high commissioner Vikram Doraiswami joining the celebrations at different temples of the Bangladesh capital.

The attacks on the pandals come close on the heels of India raising the issue of “Hinduphobia” at the United Nations.

“As regards religious identities, we are witnessing how member states are facing newer forms of religious phobias. While we have condemned anti-semitism, Islamophobia and Christianophobia, we fail to recognise that there are more virulent forms of religious phobias emerging and taking roots, including anti-Hindu, anti-Buddhist and anti-Sikh phobias,” junior external affairs minister V. Muraleedharan had said on Tuesday.