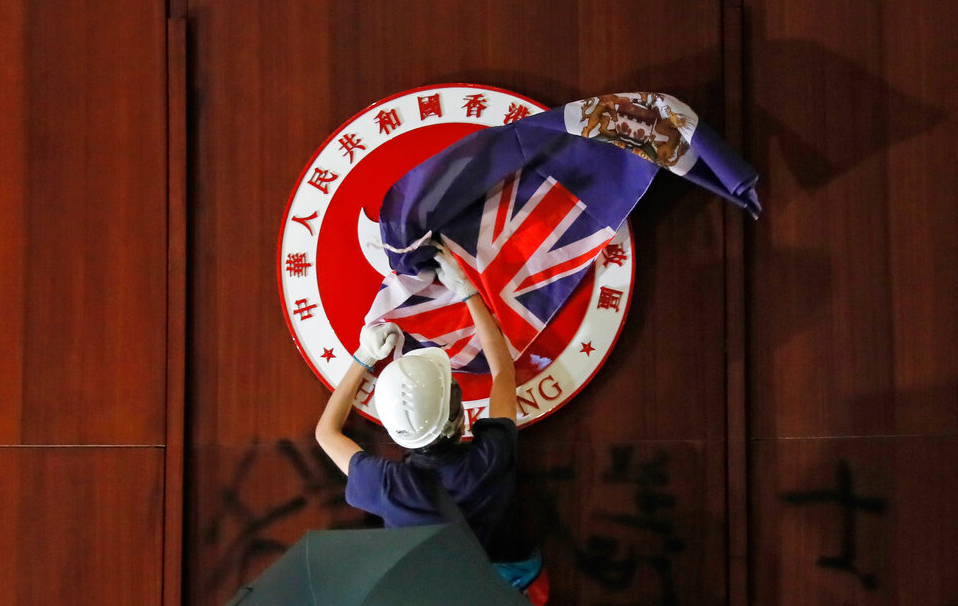 Riot police swooped down post-midnight to disperse protesters near the Hong Kong Legislative Council complex — the territory’s parliament — after a core group of demonstrators stormed the building and occupied it for three hours on Monday on the anniversary of the city’s 1997 return to Chinese rule.

The protesters are furious at a proposed law allowing extraditions to China, and they want Hong Kong leader Carrie Lam, who is backed by Beijing, to step down.

Earlier in the day, hundreds of thousands of demonstrators had marched in peaceful protest. Later, a smaller group of activists had broken into the legislature.

The split-screen protest offered vivid evidence that the divide in the former British colony is not merely between protesters and the Beijing-allied government — the protesters are increasingly at odds with one another.

Some feared the rampage would give China an excuse to harden its stand.

The police officers banged their shields on the ground as they marched in tight rows along several main roads surrounding the compound, confronting the protesters who had gathered behind makeshift barricades.

Closely following the officers were nearly two dozen police buses with their lights flashing. The police fired several rounds of tear gas, sending most of the protesters fleeing.

After the demonstrators dispersed, the police continued to hold a cordon on several streets. They entered the legislative building and searched the premises room by room for any remaining protesters. Other officers surveyed the damage and set to work dismantling barriers that the demonstrators had set up.

Just hours before, the police had backed away from a confrontation with the protesters, clearing out of the building after hours of standoff in which demonstrators had been steadily destroying the facade and glass walls of the Legislative Council.

Once inside, the protesters sprayed messages on the walls calling for protesters arrested last month to be released. “Murderous regime,” read another message.

They built barricades inside using materials they had scavenged and brought, including umbrellas and metal gates and destroyed surveillance cameras. Then they filled the legislative chambers, defaced portraits of leaders and spray-painted slogans on the desks and walls.

The protesters said they chose to descend on the Legislative Council because the police prevented them from getting close to the site of the government’s flag-raising ceremony that morning.

The government said it had stopped work on amendments to the suspended extradition bill and that the legislation would automatically lapse in July next year.

Lam had suspended the extradition bill on June 15 but stopped short of the protesters’ demands to scrap it. It was not immediately clear if the announcement that it would lapse would eventually ease the tension.

The protest was quickly turning into a broad repudiation of Chinese rule, with demonstrators tearing up copies of the Basic Law, a mini-Constitution that took effect in 1997 and governs Hong Kong’s relations with Beijing, and calling for free and direct elections.

At the handover of Hong Kong to China’s control in 1997, the Chinese government had agreed that Hong Kong could retain its justice system and protections for civil liberties for 50 years, under a philosophy commonly known as “one country, two systems”.