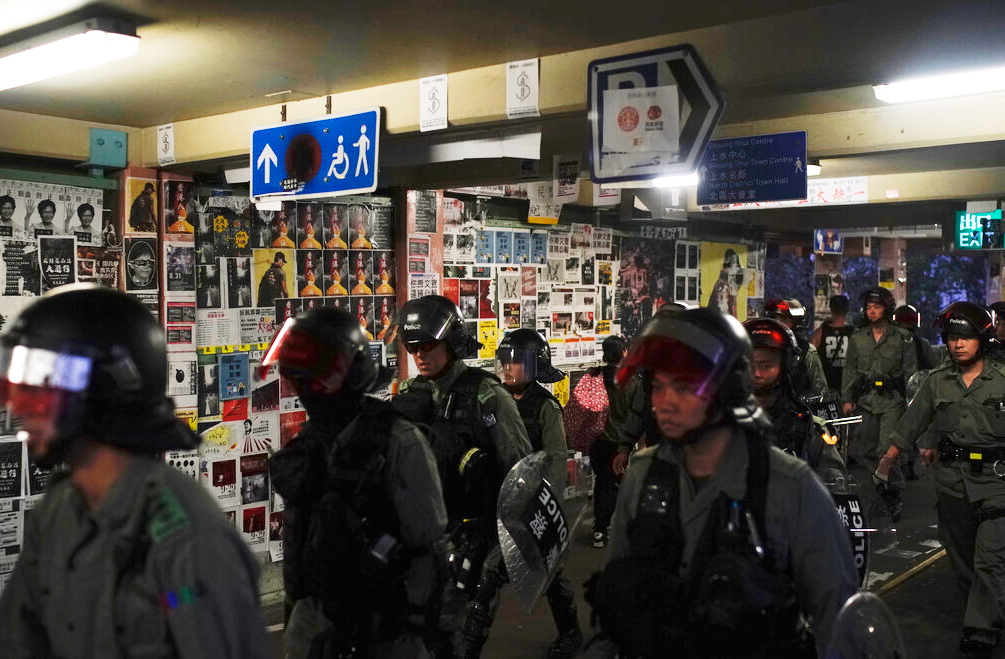 Chinese soldiers issued a warning to Hong Kong protesters on Sunday who shone lasers at their barracks in the city, in the first direct interaction with mainland military forces in four months of anti-government demonstrations.

The stand-off with the People’s Liberation Army (PLA) came after rallies attended by tens of thousands of protesters earlier on Sunday ended in violent clashes in several locations. Police fired tear gas and baton-charged the crowds, while some demonstrators threw bricks and petrol bombs at police as night fell.

Protesters concealed their faces in defiance of colonial-era emergency laws invoked by the authorities on Friday, which banned face masks. Protesters face a maximum of one year in jail for breaking the mask ban.

Police made their first arrests under the new rules, detaining scores of people. Officers tied their wrists with cable and unmasked their faces before placing them on buses. Some protesters lay in foetal positions on the ground, their wrists tied behind their backs, after being subdued with pepper spray and batons.

“The anti-mask law just fuels our anger and more will people come on to the street,” Lee, a university student wearing a blue mask, said on Sunday, as he marched on Hong Kong island.

“We are not afraid of the new law, we will continue fighting. We will fight for righteousness. I put on the mask to tell the government that I’m not afraid of tyranny.”

China’s Hong Kong military garrison warned a crowd of a few hundred protesters they could be arrested for targeting its barracks walls in the city with laser lights. It was the first direct interaction between the PLA and protesters. Chinese military personnel standing on the roof of the building held up a sign in English and Chinese which read: “Warning. You are in breach of the law. You may be prosecuted.”

The troops in fatigues also shone spotlights on the crowd and used binoculars and cameras to monitor protesters. The protesters eventually dispersed.

In August, Beijing moved thousands of troops across the border into Hong Kong in an operation state news agency Xinhua described at the time as a routine “rotation”.

But the PLA has remained in barracks since protests started, leaving Hong Kong’s police force to deal with the massive and often violent protests in the Asian financial hub.

The PLA’s top brass has warned violence is “absolutely impermissible”.

Authorities had braced for two major protests on Sunday, fearing a recurrence of Friday night’s violent protests which saw the Asian financial centre virtually shut down the next day.

The rallies on Sunday on Hong Kong island and across the harbour in Kowloon had been largely peaceful until police began to try and disperse the crowds, saying they were participating in unlawful assemblies, blocking major roads, and ordered protesters to leave immediately.

Hong Kong’s four months of protests have plunged the Chinese-ruled city into its worst political crisis in decades and pose the biggest popular challenge to Chinese President Xi Jinping since he came to power six years ago.

What started as opposition to a now-withdrawn extradition bill has swelled into a pro-democracy movement against what is seen as Beijing’s increasing grip on the city, undermining its “one country, two systems” status promised when Britain handed Hong Kong back to China in 1997.

China dismisses the accusation, saying foreign governments, including Britain and the US, have fanned anti-China sentiment.

Protesters on Sunday chanted “Hong Kongers, revolt” and “Fight for freedom, stand with Hong Kong”, as riot police monitored them from overhead walkways and footbridges, some taking photographs and filming the marchers.

Protesters handed out face masks to encourage people to defy the ban. As the day wore on protesters started to target subway stations and China banks, just as they did on Friday, which forced the unprecedented closure of the city’s metro railway.