To critics of the government, Wong’s prison sentence is an attempt to muzzle one of the most globally recognised figures of the city’s resistance to Beijing’s encroachment 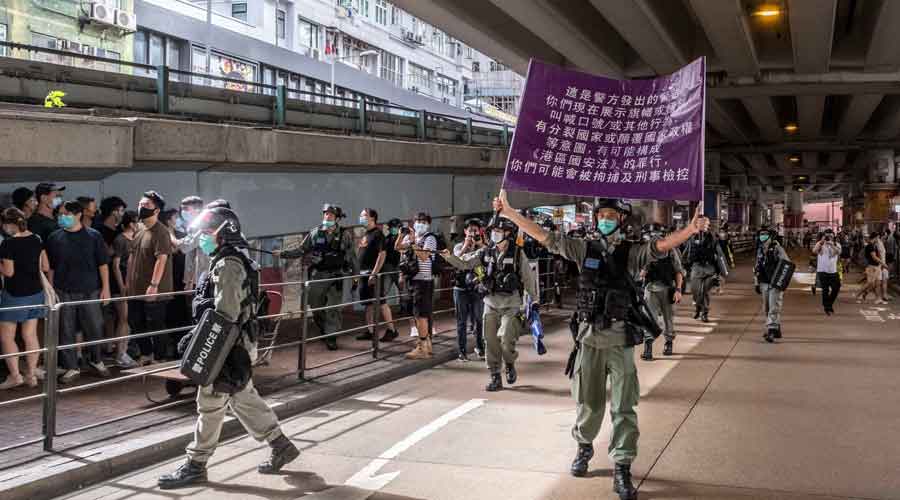 A file picture of a police officer holds up a sign that warns protesters about actions that violate the new national security law at Causeway Bay, a shopping district in Hong Kong, July 1, 2020
NYTNS
Austin Ramzy , Tiffany May   |   Hong Kong   |   Published 03.12.20, 03:37 AM

Joshua Wong, a prominent pro-democracy activist in Hong Kong, was sentenced on Wednesday to more than a year in prison for his role in a protest last year, the latest blow to the city’s embattled political opposition.

To critics of the government, Wong’s prison sentence is an attempt to muzzle one of the most globally recognised figures of the city’s resistance to Beijing’s encroachment. Wong, 24, rose to prominence nearly a decade ago as a skinny, bespectacled teenager who rallied students to oppose what he saw as the Chinese Communist Party’s indoctrination in schools. His persistent activism has made him a key target in Beijing’s drive to quash dissent in the territory.

Wong was sentenced to 13 and a half months in prison, while Agnes Chow, a fellow activist, received 10 months. Ivan Lam, a third member of their disbanded political group, Demosisto, was sentenced to seven months.

All three had faced up to three years in prison.

Their sentencing points to the wide-ranging nature of Beijing’s increasingly aggressive crackdown on political opposition in Hong Kong, which was roiled by months of antigovernment demonstrations last year.

The police have arrested activists, journalists and politicians, while pro-Beijing voices have sought to pressure the city’s largely independent judiciary and freewheeling news media. China also moved to force the ouster of four lawmakers last month, prompting the mass resignation of the pro-democracy camp from the local legislature.

This summer, China imposed a national security law on Hong Kong that grants the authorities sweeping powers to limit dissent. More than two dozen people have been arrested under it, including Chow and Jimmy Lai, the founder of the city’s biggest pro-democracy newspaper. Demosisto disbanded shortly after lawmakers in Beijing approved the security law.

The three former members of the group had pleaded guilty to unauthorised assembly charges over a June 2019 demonstration, when thousands of people gathered outside Police Headquarters in the early days of the mass protest movement that engulfed the city.

The gathering was a display of both the public’s mounting anger at the police and also the ineffectiveness of the authorities’ attempts to quell the protests with tear gas and pepper spray. Wong, who had been released from prison only days before the protest, was not as involved in organising the protests as he had been in previous campaigns.