Advertisement
Home / World / Government shutdown could last for ‘months or even years’: Trump

A member of the Secret Service walks around the grounds of the White House on Friday.
The New York Times
Michael Tackett And Sheryl Gay Stolberg/NYTNS   |   Washington   |   Published 05.01.19, 08:14 AM

President Donald Trump threatened on Friday to keep the federal government partly closed for “months or even years” if he did not get $5.6 billion for his wall at the southern border, and he warned that he was considering declaring a national emergency to build it without congressional approval.

Trump and Democratic leaders emerged from a two-hour meeting in the White House Situation Room without a deal to reopen government agencies that have been shuttered for two weeks, and the two sides offered sharply contrasting views of where they stood. By day’s end, the two sides appeared to be still locked in a stalemate.

Democrats called the meeting “contentious” while the President and Republican leaders in the House called it “productive.” And while Trump announced that he had assigned Vice-President Mike Pence to lead a “working group” to negotiate with Democrats over the weekend, Democrats said the phrase “working group” was never discussed.

“We told the President we needed the government open,” Sen. Chuck Schumer of New York, the Democratic leader, told reporters outside the White House. “He resisted. In fact, he said he’d keep the government closed for a very long period of time, months or even years.”

Appearing in the Rose Garden later, Trump confirmed the remark. “I did say that. Absolutely I said that,” he said, flanked by Pence; Kirstjen Nielsen, the homeland security secretary; and House Republican leaders. “I don’t think it will, but I am prepared.” 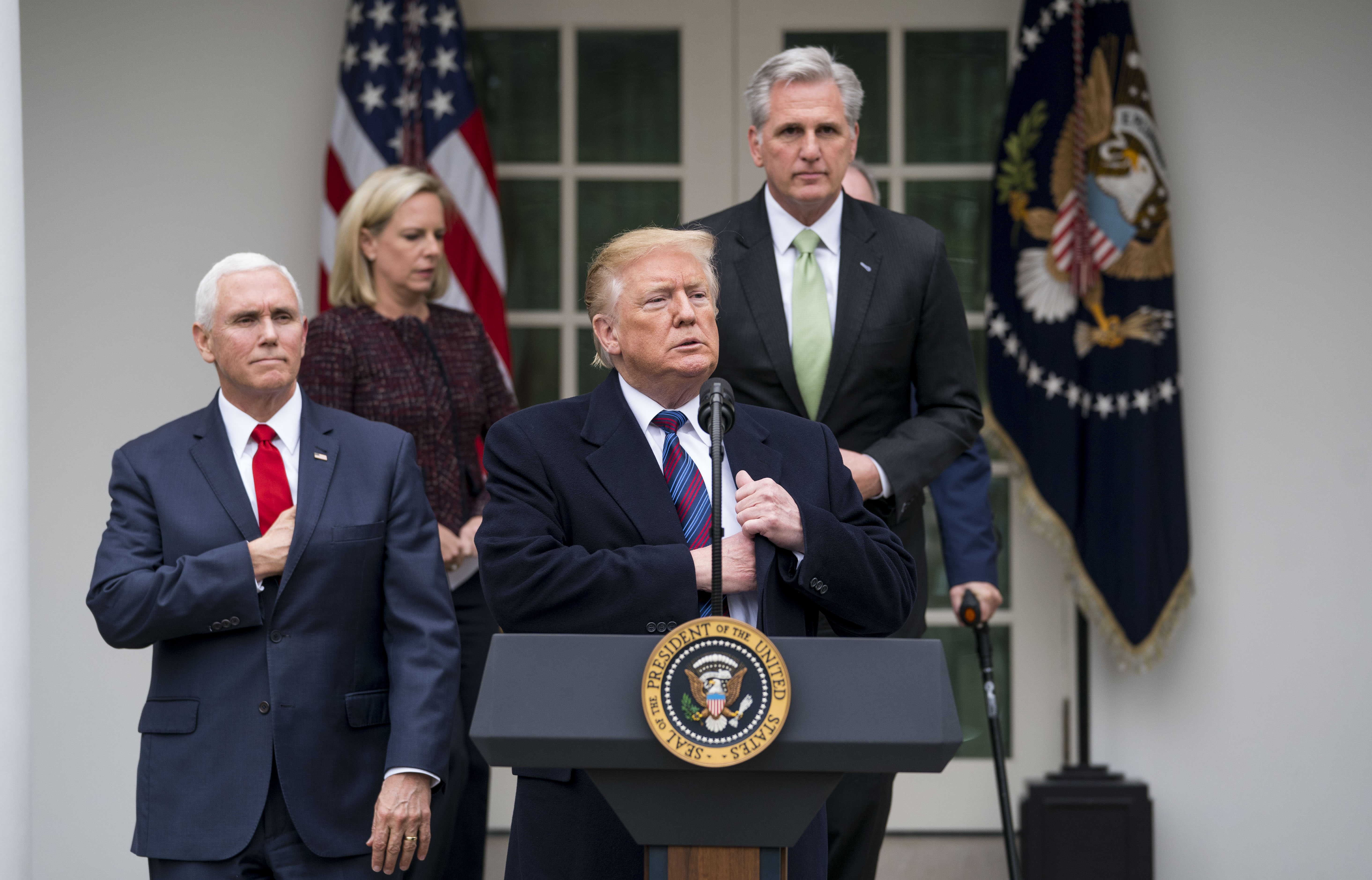 Donald Trump speaks at a news conference after a meeting with Democrats regarding the partial government shutdown, at the White House on Friday.
The New York Times

The impasse, heading into its third week, has closed parts of nine federal agencies, including the Interior Department and the Internal Revenue Service, and left 800,000 federal employees either furloughed or working without pay. Trump expressed little concern for their plight, telling reporters on Friday afternoon that when he hosted members of the Border Patrol union — his political allies — on Thursday at the White House, they told him not to worry about them, and that he was doing “a great thing for our country”.

Friday’s effort to jump-start talks was an early test of the new political dynamic in Washington, where Democrats have just taken control of the House for the first time in eight years. Trump, trying to seize control of the narrative, followed the session with his rambling Rose Garden appearance. There, he said he told Democrats he wants $5.6 billion for the wall — a figure that is a nonstarter for Democrats, who insist he will get no funding for the barrier at all.

As to invoking his emergency powers to build it, “I may do it,” Trump said. “But we can call a national emergency and build it very quickly. And it’s another way of doing it. But if we can do it through a negotiated process, we’re giving that a shot.”

But if Trump is showing no signs of backing down, the pressure may be building on Republicans in Congress. Two Republican senators have said they want votes to reopen the government, and more than a half-dozen House Republicans joined Democrats on Thursday night to do just that.


I’m very proud of doing what I’m doing. I don’t call it a shutdown. I call it ‘doing what you have to do for the benefit and for the safety of our country'.
- Donald Trump


The President was asked if he was still “proud to own” the shutdown — a reference to a comment he made last month during a televised Oval Office meeting, when he said he would be proud to shut down the government over border security.

“I’m very proud of doing what I’m doing,” he replied. “I don’t call it a shutdown. I call it ‘doing what you have to do for the benefit and for the safety of our country.'”

The White House later said it has scheduled a meeting for Saturday morning with aides to House and Senate leaders; it was unclear whether Pence and the others would be involved.

Behind the scenes, there were some indications that a search for a way out of the impasse was underway. Some conservative commentators, including Sean Hannity of Fox News, who is close to Trump, may have signaled a path out, suggesting the president resurrect the old Democratic notion of twinning wall funding with protections for the young immigrants brought illegally to the country as children who are known as Dreamers.

Such immigrants are protected by Deferred Action for Childhood Arrival, or DACA, a programme created by President Barack Obama that Trump has moved to rescind. On his way to the White House meeting, Rep. Kevin McCarthy, the Republican leader, seemed open to such a deal.

“We can find common ground,” McCarthy, R-Calif., told reporters. “DACA is a problem, border security is a problem and anything that can make sure that we can get everything together and move forward, I’m willing to discuss.”

Sen. Lamar Alexander, R-Tenn., has also suggested that Democrats could give Trump an additional $1 billion to fortify ports of entry rather than a border wall.

But while Trump said DACA was raised during the White House session, one Democratic aide, speaking on the condition of anonymity to discuss the private talks, said it came up only fleetingly. And in the news conference, Trump made clear he did not want to address the DACA issue — which is the subject of several lawsuits working their way through the federal courts — until the Supreme Court renders a final decision on whether Trump’s order to rescind the programme can stand.

Trump also raised the issue of ports of entry for immigrants, but again, he eventually stuck to his demand that any strengthening of controls at such ports needed to be complemented with a wall.

The President said he invited Democrats to send negotiators to meet over the weekend with three high-ranking officials — Pence, Nielsen and Jared Kushner, his son-in-law and senior adviser — to negotiate a deal to strengthen security along the border. Democrats told reporters after the meeting that they implored the president to first reopen the government so they could negotiate without holding federal operations and employees hostage.

No matter what happens, the government will remain partly shuttered at least through Tuesday because both houses of Congress are adjourned until then.

Donald Trump is 'all alone' in the White House, waiting for a border deal