The French president was expected to raise human rights concerns with Mohammed bin Salman, but energy supply was also high on the agenda for the meeting in Paris with the de facto ruler of the Gulf Arab oil giant 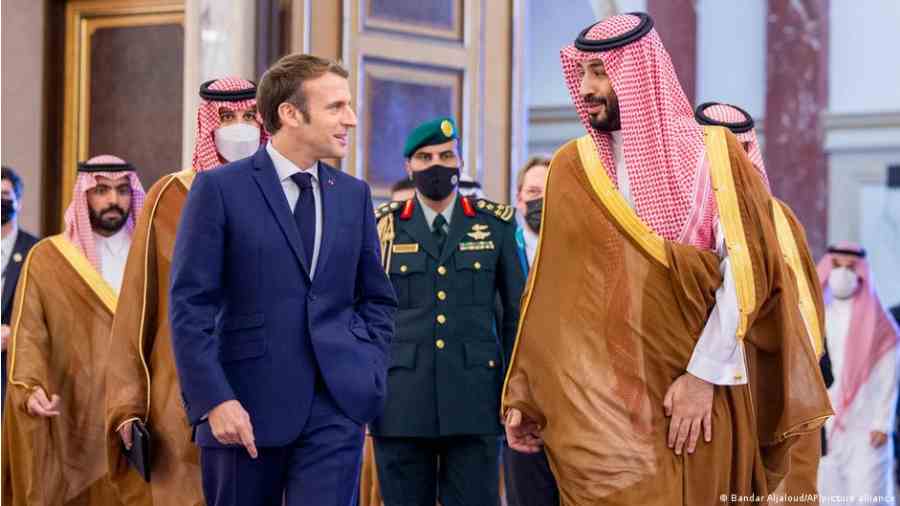 The prince has been in Europe since Tuesday, visiting Greece and now France in his first official trip to the continent since the murder of Saudi journalist Jamal Khashoggi in 2018 in the Saudi consulate in Istanbul.

It is just the latest sign of the readmission of the kingdom's de facto ruler after nearly four years of international isolation following the murder, which some investigators accused him of ordering.

It comes as the West is courting the major oil-producing state amid the war in Ukraine and faltering nuclear talks with Iran.

"Obviously, this isn't about casting aside our principles. It's not about calling into question our commitment in favor of human rights. The president will surely have an opportunity to talk about this with Mr. Mohammed bin Salman," Borne said.

"In a context where we know that Russia is cutting, is threatening to cut, and is again cutting gas supplies, and where we have tensions over energy prices, I think the French would not understand if we didn't talk to the countries that are precisely producers of energy,'' she said.

"I am scandalized and outraged that Emmanuel Macron is receiving, with all the honors, the executioner of my fiance, Jamal Khashoggi," Hatice Cengiz said.

"The surge in energy prices because of the war in Ukraine cannot justify that — in the name of alleged realpolitik — we absolve the person responsible for Saudi policy towards political opponents," she said.

The Washington-based group Democracy for the Arab World Now, or DAWN, filed a lawsuit in France against the Saudi leader.

"As a party to the UN Conventions against torture and enforced disappearances, France is obliged to investigate a suspect such as Bin Salman if he is present on French territory,'' said Sarah Leah Whitson, DAWN's executive director.

Another NGO, Switzerland-based TRIAL International, co-filed the complaint on Thursday.

"Is the dismembered body of the journalist Khashoggi on the menu for the evening meal between Macron and MBS?" the French environmentalist politician Yannick Jadot, who contested the first round of the presidential elections earlier this year, wrote on Twitter.

The crown prince's Europe trip follows a visit by US President Joe Biden to Saudi Arabia.

Biden came under criticism for his fist bump with MBS despite having pledged to sideline the Saudi royal family over its human rights record.

"The rehabilitation of the murderous prince will be justified in France as in the United States by arguments of realpolitik. But it's actually bargaining that predominates, let's face it," Amnesty International Secretary General Agnes Callamard wrote on Twitter.