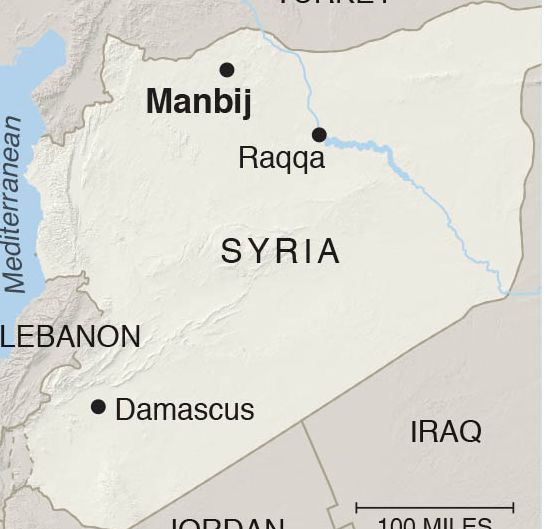 The attack targetted a US military convoy in the northern city of Manbij while troops were inside the Palace of the Princes, a restaurant where they often stopped to eat during patrols, residents said.
The New York Times
Eric Schmitt, Ben Hubbard And Rukmini Callimachi/ New York Times News Service   |   Washington   |   Published 17.01.19, 10:26 AM

Four Americans were among 19 people killed in Syria on Wednesday in a suicide bombing that was claimed by the Islamic State, just weeks after President Donald Trump ordered the withdrawal of US forces and declared that the extremist group had been defeated.

The attack targetted a US military convoy in the northern city of Manbij while troops were inside the Palace of the Princes, a restaurant where they often stopped to eat during patrols, residents said. While the Americans were inside, a nearby suicide attacker wearing an explosive vest blew himself up.

The bombing raised new questions about Trump’s surprise decision last month to end the US ground war in Syria. Critics of the President’s plans, including members of his own party, said Trump’s claim of victory over the Islamic State may have emboldened its fighters and encouraged Wednesday’s strike.

It was at least the sixth major attack by the Islamic State in less than a month, according to one US. official, and was one of the deadliest days that the American-led coalition had suffered in the fight against the group.

Trump’s withdrawal announcement, made over the objections of his top national security officials, “set in motion enthusiasm by the enemy we’re fighting,” said Republican Senator Lindsey Graham, a prominent Trump ally who has nonetheless criticized the military drawdown.

“I saw this in Iraq. And I’m now seeing it in Syria,” Graham said at a Senate judiciary committee hearing on Wednesday.

Even as the White House offered condolences over the deaths, Vice-President Mike Pence insisted in a statement that the Islamic State had, in fact, been defeated.

“Thanks to the courage of our armed forces, we have crushed the ISIS caliphate and devastated its capabilities,” Pence said. “As we begin to bring our troops home, the American people can be assured, for the sake of our soldiers, their families and our nation, we will never allow the remnants of ISIS to re-establish their evil and murderous caliphate — not now, not ever.”

There are about 2,000 US troops in Syria. Patrick Shanahan, the acting defense secretary, declined to comment when asked if the attack would affect the withdrawal plans.

The American casualties included two service members, a civilian employee of the Defense Intelligence Agency and a military contractor, according to the US Central Command and a Pentagon official. Three other service members were wounded.

The Syrian Observatory for Human Rights put the death toll from the explosion at 19 — 10 Syrian civilians and five local fighters in addition to the four Americans.

Surveillance footage posted on social media showed a street with cars double-parked in front of the restaurant and pedestrians on the sidewalk. Then came the blast, consuming the sidewalk in a giant fireball and sending passers-by running for cover.

A statement from the Islamic State, released through its Amaq news agency, said the suicide attacker detonated his explosive vest to target a patrol of coalition soldiers and local militiamen near the restaurant in Manbij.

The city has been ruled by nearly all sides fighting in the Syrian civil war that broke out in 2011. The US began deploying troops to fight the Islamic State in Syria in 2015. A year later, a US-backed militia of Kurdish and Arab fighters ousted the extremists from Manbij.

Since then, Manbij has largely been governed and protected by American-backed local councils. While the city is hundreds of miles from any territory held by the Islamic State, it sits next to areas controlled by Turkey and its Syrian rebel allies. US forces maintain a number of bases near Manbij and run frequent patrols.

In December, Trump announced he would withdraw American forces from Syria in as little as 30 days. A day later, defence secretary Jim Mattis resigned in protest. Before he left the Pentagon, however, Mattis signed the formal order to begin the military drawdown.

But last week, John Bolton, the White House national security adviser, outlined conditions for the withdrawal that could leave American forces in Syria for months or even years. So far, the military has begun withdrawing some equipment — but not troops — from Syria. The overall plan for the withdrawal has yet to be described in detail.

“I strongly urge the President to forcefully respond and ensure we do not withdraw our troops until ISIS is completely destroyed,” Rep. Michael McCaul of Texas, the ranking Republican on the House Foreign Affairs Committee, said in a statement.

“The fight against ISIS is clearly not over,” said Sen. Robert Menendez of New Jersey, the top Democrat on the Senate Foreign Relations Committee.

He said the bombing “is a stark reminder that the Trump administration needs a clearly developed and articulated strategy to secure the gains we have made in the fight.”

Islamic State fighters have also repeatedly struck in and around the eastern Syrian town of Hajin, where an U.S.-backed Kurdish militia has been battling over the last sliver of territory controlled by the extremists.

The number of Islamic State fighters in Iraq and Syria is estimated at 20,000 to 30,000, according to recent reports by the Pentagon, the United Nations and the Center for Strategic and International Studies, a think tank based in Washington.

The extremist group has repeatedly boasted in online messages that the military withdrawal from Syria is evidence that it has outlasted the Americans.