Flight of fancy across English Channel

His biggest challenge was refuelling with another backpack, which required landing on a platform mounted on a boat 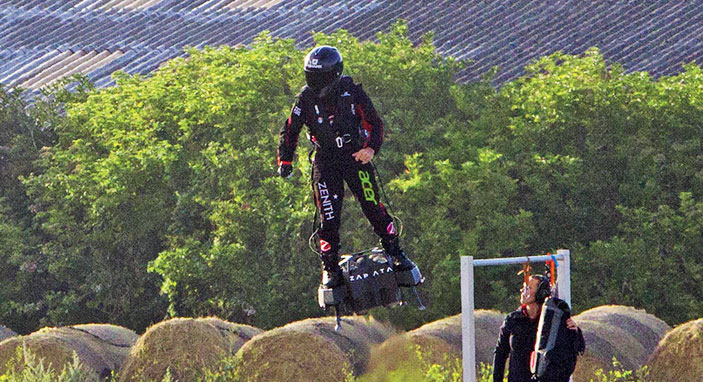 French inventor Franky Zapata on Sunday succeeded in crossing the English Channel on a jet-powered hoverboard he designed, zooming over the Strait of Dover in just over 20 minutes.

After a previous bid in July that ended with him falling into the sea, Zapata took off from Sangatte, just outside Calais in France, on a little platform powered by five small jet engines and carrying kerosene in a backpack.

Flanked by three helicopters, he reached Britain after a stop on a boat halfway through the 35km crossing to refuel, waving to onlookers before landing safely in Saint Margaret’s Bay, close to Dover on Britain’s southern coast.

“For the last 5-6km I just really enjoyed it,” Zapata told reporters on arrival. “Whether this is a historic event or not, I’m not the one to decide that, time will tell.”

“We made a machine three years ago... and now we’ve crossed the Channel, it’s crazy,” he said, before breaking into tears. Dozens of people came to cheer on Zapata at take-off and a few residents and tourists gathered to watch the Frenchman land.

Zapata said the hoverboard had reached speeds of 160 to 170kmph during the crossing. His biggest challenge was refuelling with another backpack, which required landing on a platform mounted on a boat.

He said it was not yet clear what the hoverboard might be used for, adding it was a complex craft that the average person was unlikely to be able to navigate. “It’s not a machine for a trip down to the bakery on a Sunday morning,” Zapata said.