Rescue efforts were hampered by heavy rainfall and low visibility 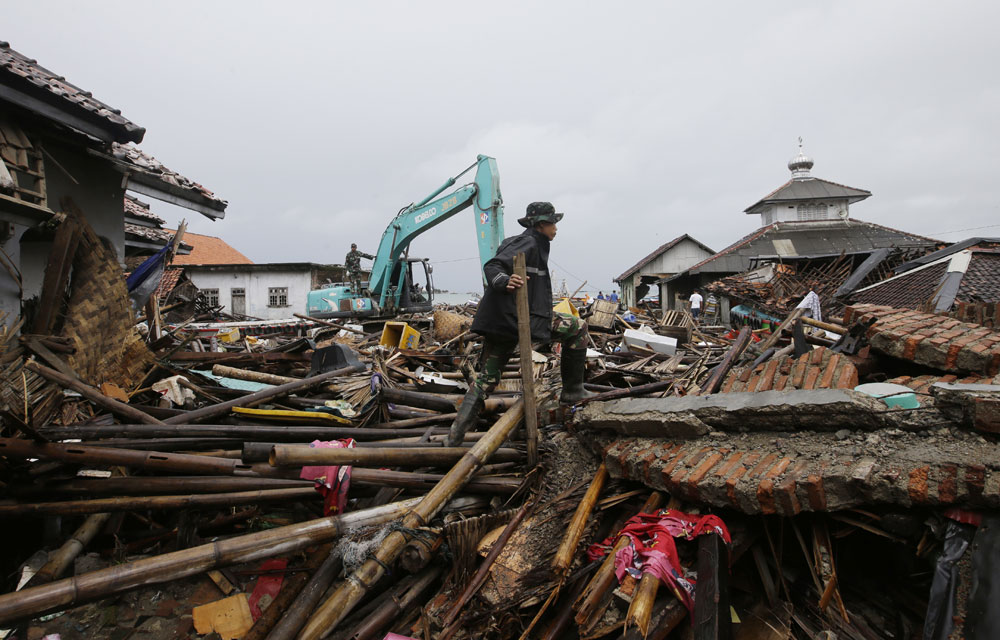 Indonesian rescuers on Tuesday used drones and sniffer dogs to search for survivors along the devastated west coast of Java hit by a tsunami that killed at least 429 people, warning more victims are expected to be uncovered as the search expands.

Thick ash clouds continued to spew from Anak Krakatau, a volcanic island where a crater collapse at high tide on Saturday sent waves smashing into coastal areas on both sides of the Sunda Strait between the islands of Sumatra and Java.

At least 154 people remain missing. More than 1,400 people were injured, and thousands of residents had to move to higher ground, with a high-tide warning extended to Wednesday.

Rescuers used heavy machinery, sniffer dogs, and special cameras to detect and dig bodies out of mud and wreckage along a 100km stretch of Java’s west coast and officials said the search area would be expanded further south.

“There are several locations that we previously thought were not affected,” said Yusuf Latif, spokesperson for the national search and rescue agency. “But now we are reaching more remote areas... and in fact there are many victims there.”

It took just 24 minutes after the landslide for waves to hit land, and there was no early warning for those living on the coast. Authorities have warned of further high waves and advised residents to stay away from the shoreline.

“Since Anak Krakatau has been actively erupting for the past several months additional tsunamis cannot be excluded,” said Prof. Hermann Fritz, from the Georgia Institute of Technology in the US.

Rescue efforts were hampered by heavy rainfall and low visibility. Military and volunteer teams used drones to assess the extent of the damage along the coast.

Food, water, blankets and medical aid are trickling into remote areas via inland roads that are choked with traffic.

Thousands of people are staying in tents and temporary shelters like mosques or schools, with dozens sleeping on the floor and using public facilities. Many remained traumatised by the disaster.

In tsunami-hit Indonesia, a Christmas 'full of grief'