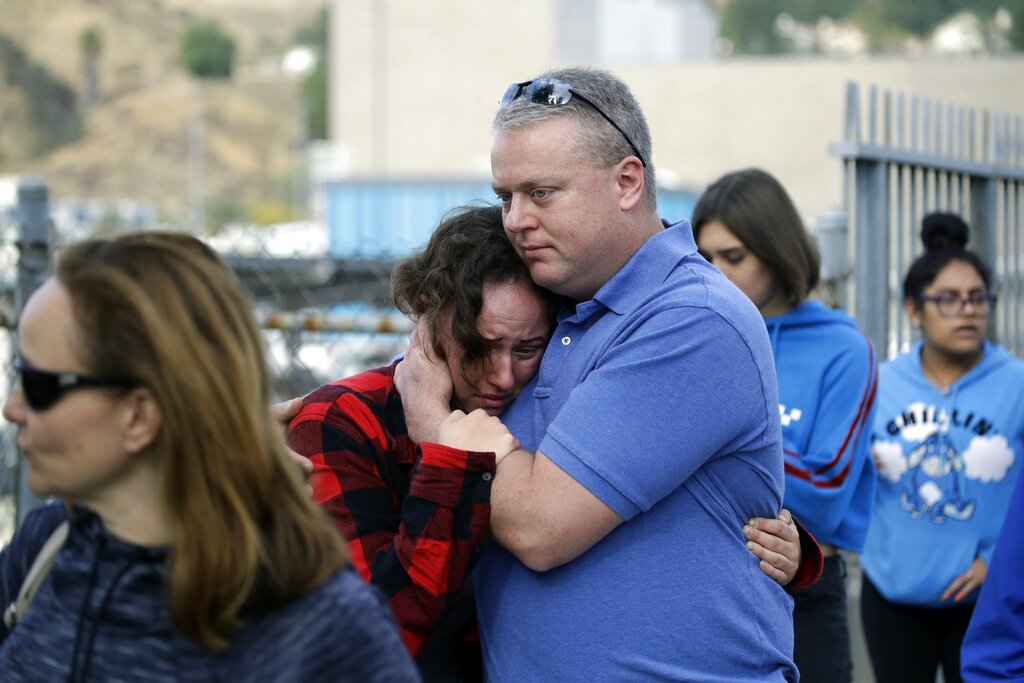 Students are escorted out of Saugus High School as some parents join them after reports of a shooting on Thursday, Nov. 14, 2019, in Santa Clarita, California.
Shutterstock
Jill Cowan, Amy Harmon And Nicholas Bogel-Burroughs/ NYTNS   |   California   |   Published 15.11.19, 08:34 PM

Frantic parents texted with teenagers barricaded in classrooms. Others offered shelter to students fleeing their high school in this sleepy suburb north of Los Angeles on Thursday. It was the latest example of a wrenching sequence that has become a recurring nightmare for families in America.

This time it was a little after 7.30am when a young man opened fire at Saugus High School in Santa Clarita, California, killing two students and wounding three others before turning the gun on himself, authorities said.

The 16-year-old suspect was said to be in grave condition after shooting himself in the head. Law enforcement officials said he was a student at Saugus High School, and that Thursday was his birthday.

For Saugus students, the sound of gunfire came with the shock of recognition that the lockdown routine they had practised would not be a drill. For parents, there was the terror that this time, their children might be the ones to die.

Kristine Almaraz, 50, said she was dropping off her younger son at Arroyo Seco Junior High when she saw police cars flying past on Bouquet Canyon Road.

“I thought, ‘I pray to God it’s not the high school,’” she said. “Are you ok?” she texted her son, Maxximus, 16, who was at Saugus, sheltering in place in his first-period classroom. “Yea,” he texted back “Don’t worry mama. You know I’m too smart to die.”

Jeremy Thompson first learned about the shooting when his younger son, a sophomore at Saugus, called him early on Thursday. “Kids today, they never call, so you get this call, and you automatically wonder what it’s going to be,” Thompson said in an interview from a parent reunification centre nearby.

The sophomore told his father that there had been shots fired at school and that he was walking away from the building towards his mother’s house.

His older son, a senior, told him by text that he and his classmates had barricaded themselves in a classroom and covered up the windows. Thompson had been at the school the night before to see one of his sons performing in a theatre production of Shakespeare in Love.

“And then I come here this morning and see a bunch of them huddled together in tears,” he said.

Thompson said that as the names of shooting sites around the country stack up — Sandy Hook, Las Vegas, Parkland — he had just wished Santa Clarita would not be added to the list. “You just hope against hope that it’s not going to hit your school or your kids,” he said.

The sound of the gunshots in the quad did not reach Kaitlin Holt’s classroom. Her choir students were listening to a recording of their own singing, which drowned out the popping.

But then several students rushed in, screaming. One of them, a freshman girl, had been shot, said Holt, 26.

The rookie teacher, who started in January, quickly wheeled a grand piano in front of the door and ushered dozens of her students into an office, locking the door behind them.

The students sat on Holt’s floor with the lights off. They were afraid, they were crying, but they also knew how to keep safe, she said. They knew to muffle their sobbing. They knew to keep their phones silent and dark. One quietly called the police. Another grabbed a fire extinguisher - just in case the gunman made it inside.

Holt also knew what to do. After barricading the door, she grabbed a gunshot wound kit that she keeps in her classroom and wrapped the wounds of the freshman girl who had been shot in the torso and shoulder, she said. The girl survived.

Within 16 seconds, the gunman with a .45-caliber semiautomatic pistol shot five students — seemingly at random — and then himself, said Capt. Kent Wegener of the Los Angeles County sheriff’s department.

Little is known about a motive or the suspect, whom police declined to name because he is a minor.