'India, one of the largest vaccine manufacturers in the world, has fully vaccinated 3 per cent of its population, and is still in the middle of a nightmarish second wave' 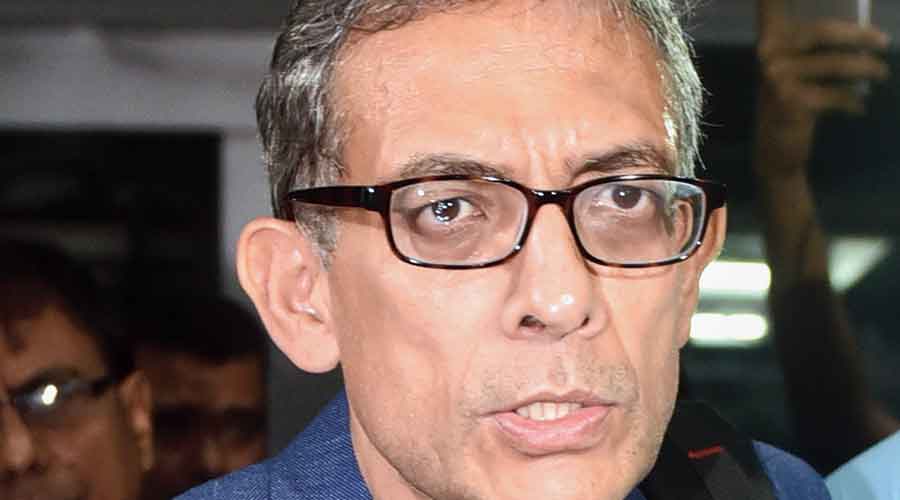 Nobel laureates Abhijit Banerjee and Esther Duflo have called for “a global vaccination programme to bring Covid-19 under control”, underlining that “as it stands today, vaccine access is deeply unequal”.

The couple, who shared the 2019 Nobel for economics, have said: “India, one of the largest vaccine manufacturers in the world, has fully vaccinated 3 per cent of its population, and is still in the middle of a nightmarish second wave that has forced the country to stop exports of all vaccines.”

They have drawn attention to the plight of the poor: “An estimated 100 million more people are now living in extreme poverty compared to the start of the pandemic. Developing countries contemplating a lockdown are caught in a double bind between economic disaster (in India, for example, the first lockdown cost the country almost a quarter of its GDP) and overflowing morgues and mortuaries.”

Their argument that the rich countries should share vaccines with the developing world is not new — no one is safe until everyone is safe — but Banerjee and Duflo have made the moral and economic case for such a programme.

“It would only cost $50bn to ensure 40 per cent of the world’s population is vaccinated by the end of the year, and 60 per cent by the first half of 2022,” they have said.

“This is a recent estimate from the IMF, the latest institution to join a chorus of voices calling for a global vaccination programme to bring Covid-19 under control. The IMF has highlighted the economic benefits of global vaccines, which would be huge. But there is another powerful reason for a worldwide campaign.”

Writing in The Guardian, the two economists have added: “Vaccinating the world will be crucial if countries are going to act together to confront the climate crisis, which will require many of the same things as delivering vaccines: resources, innovation, ingenuity and a true partnership between rich and developing countries. The Cop26 climate conference in November will be an opportune moment for building this partnership. But to do so, rich countries need to deliver on their early promises to deliver global vaccines.”

They have acknowledged the realities of the choices facing governments: “Despite all the talk of solidarity at the beginning of the pandemic, rich countries built sufficient capacity to produce only enough vaccines for themselves and then proceeded to corner the world’s supplies. By March, high-income countries accounting for 16 per cent of the world’s population had bought up 50 per cent of vaccine doses.

“As of this month, only 80m of the 2bn vaccines promised to the world’s poorest through the ACT accelerator, a partnership including the UN-backed Covax scheme, have been delivered. The reason? A combination of insufficient donor funds and competition for vaccine doses from the richest countries, who can afford to pay high prices if needed, and who are planning to stockpile millions of extra doses for the future. The Bill and Melinda Gates Foundation estimates that rich countries will have up to a billion extra doses on hand by the end of this year.”

They have added: “These inequities were mirrored by what happened with economic policy. While rich countries borrowed massively and spent more than 20 per cent of GDP to help their populations ride out the crisis, poor countries could afford to spend only 2 per cent of GDP.”

They concluded: “The catastrophic moral failure on the part of rich countries to help poorer nations can only reinforce the strong suspicion in much of the developing world that, despite talk of global cooperation and shared fortunes, when push comes to shove it’s everyone for themselves. This could be devastating for global efforts against the climate crisis.

“The success of Cop26 depends in part upon larger developing countries such as Bangladesh, China, India, Indonesia, Mexico, Nigeria and Pakistan committing to sacrifices that will only pay off if countries such as the US, UK, Germany, France and Canada can be relied upon to stick to their own commitments.

“How do we rebuild trust quickly? Investing now to vaccinate the world is a chance to repair the damage done in the past year.

“There is some faint indication that the world is heading in the right direction…. But this is all too little and too slow. Succeeding in this vaccination effort is our chance to show that the talk of a common community and a shared destiny is more than just words. To prove that it is there, let’s start with vaccines.”