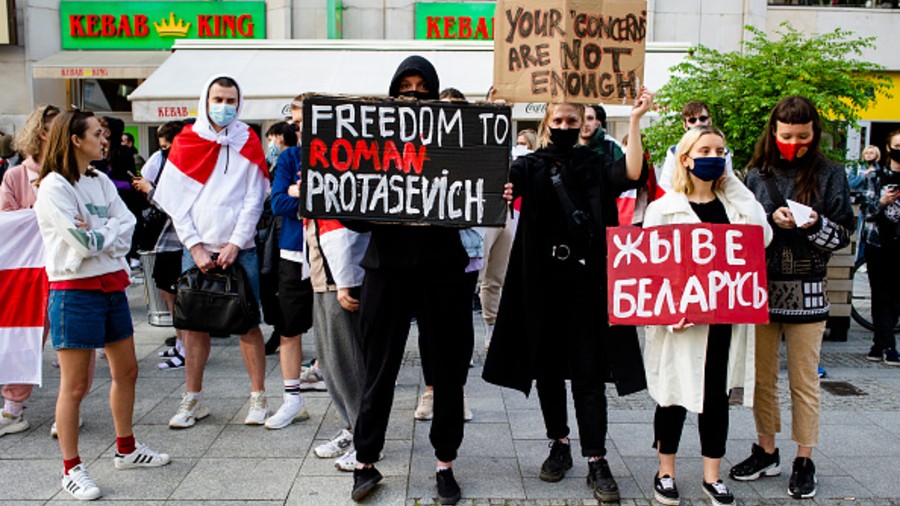 Large number of Belarusians and Poles gathered in Warsaw in a protest against Belarussian president Lukashenko after his authorities forced Ryanair plane to land in Minsk and detained opposition journalist Raman Pratasevich, now accussed of terrorism.
Getty Images
Reuters   |   Vilnius, Lithuania   |   Published 26.05.21, 01:15 AM

Airlines shunned Belarus’s airspace on Tuesday and Belarusian planes faced a possible ban from Europe as international outrage mounted over Minsk forcing down a jetliner and arresting a dissident journalist who was on board.

A video released overnight showed 26-year-old Roman Protasevich confessing to having organised anti-government demonstrations. On Sunday he was pulled off a flight from Greece to Lithuania forced down in the Belarusian capital Minsk.

“He said that he was treated lawfully, but he’s clearly beaten and under pressure. There is no doubt that he was tortured. He was taken hostage,” she told a news conference in the Lithuanian capital Vilnius.

The regime's propaganda channels posted a video of arrested Raman Pratasevich, saying that he is treated lawfully in the Minsk Detention Center №1. This is how Raman looks under physical and moral pressure. I demand the immediate release of Raman and all political prisoners. pic.twitter.com/zdolsbp6m5

Belarus did not immediately comment on the torture allegation but has consistently denied abusing detainees. Rights groups have documented hundreds of cases of what they describe as abuse and forced confessions during a crackdown on pro-democracy activists since last year.

France and Ireland have described the incident as piracy. On Tuesday Nato secretary-general Jens Stoltenberg called it a “state hijacking”.

In response to Minsk’s actions, the European air traffic control agency, Eurocontrol, recommended that EU and British carriers that fly over Belarus should re-route via the Baltic states.

Underlining the EU’s desire to show support for opponents of Belarusian President Alexander Lukashenko, French President Emmanuel Macron said he would like the Belarusian Opposition to be invited to meet G7 leaders at a summit in Britain next month. London did not immediately respond.

Belarusian state media have reported that Lukashenko personally ordered the flight to be intercepted. Belarus says it was responding to a bomb scare that later proved to be a false alarm. The UN agency ICAO has said the incident may have violated the foundational treaty governing international civil aviation, the 1944 Chicago Convention.

Protasevich and a 23-year-old student travelling with him were arrested, and three other people disembarked the flight in Minsk, suspected by western countries of being spies involved in the operation.

They were interviewed on Belarus state TV, which identified them as two Belarusians and a Greek. All three said they had asked to disembark because they planned to travel to Minsk anyway once the plane reached Vilnius.

EU leaders at a summit on Monday called for airlines based in the 27-member bloc to halt flights over Belarusian airspace, which is along a major corridor connecting Europe and Asia and earns hard currency from overflight rights.

Lufthansa, KLM, SAS, Air France, LOT and Singapore Airlines were among carriers that announced they would stop flying over Belarus.

The EU leaders also directed officials to draw up unspecified new sanctions against Belarus, and to work out a way to ban Belarusian airlines from the bloc’s skies.

Belarus’s neighbour, Ukraine, also announced a ban on flights to or from Belarus, and on its own airlines using Belarusian airspace. That could mean land-locked Belarus could soon be reached by air only over its eastern border with close ally Russia.

“If we let this go, tomorrow Alexander Lukashenko will do something even more arrogant, more cruel,” Ukrainian foreign minister Dmytro Kuleba said.