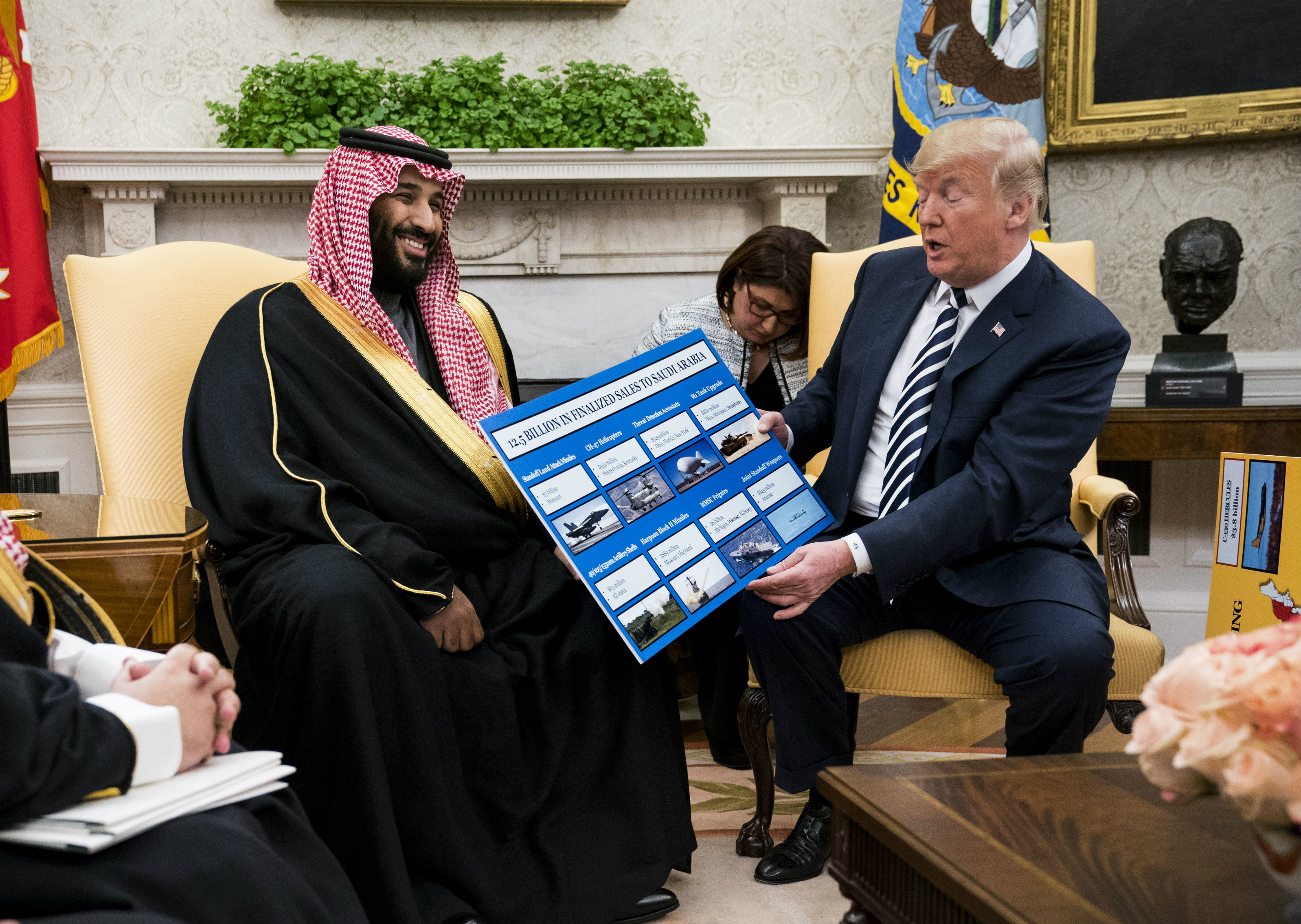 When a Saudi F-15 warplane takes off from King Khalid air base in southern Saudi Arabia for a bombing run over Yemen, it is not just the plane and the bombs that are American.

American mechanics service the jet and carry out repairs on the ground. American technicians upgrade the targeting software and other classified technology, which Saudis are not allowed to touch. The pilot has likely been trained by the US air force.

And at a flight operations room in the capital, Riyadh, Saudi commanders sit near US military officials who provide intelligence and tactical advice, mainly aimed at stopping the Saudis from killing Yemeni civilians.

US fingerprints are all over the air war in Yemen, where errant strikes by the Saudi-led coalition have killed more than 4,600 civilians, according to a monitoring group. In Washington, that toll has stoked impassioned debate about the pitfalls of America’s alliance with Saudi Arabia under Crown Prince Mohammed bin Salman, who relies on US support to keep his warplanes in the air.

Saudi Arabia entered the war in 2015, allying with the United Arab Emirates and a smattering of Yemeni factions with the goal of ousting the Iran-allied Houthi rebels from northern Yemen. Three years on, they have made little progress. At least 60,000 Yemenis have died in the war, and the country stands on the brink of a calamitous famine.

For US officials, the stalled war has become a strategic and moral quagmire. It has upended the assumptions behind the decades-old policy of selling powerful weapons to a wealthy ally that, until recently, rarely used them. It has raised questions about complicity in possible war crimes. And the civilian toll has posed a troubling dilemma: how to support Saudi allies while keeping the war’s excesses at arm’s length.

In interviews, 10 current and former US officials portrayed a troubled and fractious American response to regular reports of civilians killed in coalition airstrikes.

The Pentagon and State Department have denied knowing whether US bombs were used in the war’s most notorious airstrikes, which have struck weddings, mosques and funerals. However, a former senior State Department official said that the US had access to records of every airstrike over Yemen since the early days of the war, including the warplane and munitions used.

At the same time, US efforts to advise the Saudis on how to protect civilians often came to naught. The Saudis whitewashed an American-sponsored initiative to investigate errant airstrikes and often ignored a voluminous no-strike list.

“In the end, we concluded that they were just not willing to listen,” said Tom Malinowski, a former assistant secretary of state and an incoming Democratic member of Congress from New Jersey. “They were given specific coordinates of targets that should not be struck and they continued to strike them. That struck me as a willful disregard of advice they were getting.”

Yet American military support for the airstrikes continued.

As bombs fell on Yemen, the United States continued to train the Royal Saudi Air Force. In 2017, the US military announced a $750 million programme focused on how to carry out airstrikes, including avoiding civilian casualties. The same year, Congress authorised the sale of more than $510 million in precision-guided munitions to Saudi Arabia, which had been suspended by the Obama administration in protest of civilian casualties.

Nearly 100 US military personnel are advising or assisting the coalition war effort, although fewer than 35 are based in Saudi Arabia.

US support for the war met stiff headwinds this Fall, when congressional fury over the killing of Saudi dissident Jamal Khashoggi combined with worries over civilian deaths in Yemen.

The civilian toll is still rising. According to the Armed Conflict Location and Event Data Project, November was the most violent month in Yemen since the group began tracking casualties in January 2016. There were 3,058 war-related fatalities in November, it said, including 80 civilians killed in airstrikes.

“There was a belief that these countries wouldn’t end up using this equipment, and we were just selling them expensive paperweights,” said Andrew Miller, a former State Department official now with the Project on Middle East Democracy.

When the prince, then the Saudi defence minister, sent fighter jets to Yemen in March 2015, Pentagon officials were flustered to receive just 48 hours’ notice of the first strikes against Houthi rebels, two former senior US officials said. American officials were persuaded by Saudi assurances the campaign would be over in weeks.

But as the weeks turned to years, and the prospect of victory receded, the Americans found themselves backing a military campaign that was exacting a steep civilian toll, largely as a result of Saudi and Emirati airstrikes.

US military officials posted to the coalition war room in Riyadh noticed that inexperienced Saudi pilots flew at high altitudes to avoid enemy fire, military officials said. The tactic reduced their risk but transferred it to civilians, who were exposed to less accurate bombings.

Coalition planners misidentified targets and their pilots struck them at the wrong time — destroying a vehicle as it passed through a crowded bazaar, for instance, instead of waiting until it reached an open road. The coalition routinely ignored a no-strike list — drawn up by the US Central Command and the United Nations — of hospitals, schools and other places where civilians gathered.

Why Trump is sticking with the Saudi crown prince

In June 2017, US officials extracted new promises of safeguards, including stricter rules of engagement and an expansion of the no-strike list to about 33,000 targets — provisions that allowed the secretary of state, then Rex Tillerson, to win support in Congress for the sale of more than $510 million in precision-guided munitions to the kingdom.

But those measures seemed to make little difference. Just over a year later, in August 2018, a coalition airstrike killed at least 40 boys on a packed school bus in northern Yemen.

Still, US leaders insisted they need to keep helping the Saudi coalition.

America’s role in the war was “absolutely essential” to safeguard civilians, the general in charge of Central Command, Gen. Joseph Votel, told a charged Senate hearing in March.

“I think this does give us the best opportunity to address these concerns,” he said.

In the March hearing, senators accused the Pentagon of being complicit in the coalition’s errant bombing and pressed its leaders on how directly the United States was linked to atrocities.

Votel said the military knew little about that. The United States did not track whether the coalition jets that it refueled carried out the airstrikes that killed civilians, he said, and did not know when they used American-made bombs. At a briefing in Cairo in August, a senior US official echoed that assessment.

“I would assume the Saudis have an inventory system that traces that information,” said the official, who spoke anonymously to discuss diplomatically sensitive relations. “But that’s not information that is available to the US.”

But Larry Lewis, a State Department adviser on civilian harm who worked with the Saudi-led coalition from 2015 to 2017, said that information was readily available from an early stage.

At the coalition headquarters in Riyadh, he said, US liaison officers had access to a database that detailed every airstrike: warplane, target, munitions used and a brief description of the attack. US officials frequently emailed him copies of a spreadsheet for his own work, he said.

The data could easily be used to pinpoint the role of US warplanes and bombs in any single strike, he said. “If the question was “Hey, was that a US munition they used?” You would know that it was,” he said.

Capt. Bill Urban, a spokesperson for Central Command, did not deny the existence of the database, but said US officers only used coalition data to carry out their core mission: advising on civilian casualties, sharing intelligence on Houthi threats and coordinating the midair refueling that ended in November.

“I will not speculate on how the United States could have used or compiled the information the Saudi-led coalition shared for some other function,” he said in a statement. “That is not the mission these advisers were invited to Riyadh to perform. That is not the way partnerships work.”

Other officials have said that collating information about use of American munitions in Yemen would be onerous and, ultimately, pointless. “What difference would it make?” the senior US official in Cairo said.

But legal experts say such information could be significant. Inside the State Department, there have been long-standing worries about potential legal liability for the US role in the war. In August, the United Nations’ human rights body determined that some coalition airstrikes were likely war crimes.

Under US law, customers of American weapons must follow the laws of armed conflict or future sales may be blocked, said Ryan Goodman, a former Defence Department attorney who teaches law at New York University.

Short of halting all weapons sales, critics say the United States could pressure the Saudis by curtailing its assistance to the air war. Hundreds of American aviation mechanics and other specialists, working under Defence Department contracts, keep the Saudi F-15 fleet in the air. In 2017, Boeing signed a $480 million contract for service repairs to the fleet.

But after the departure of Mattis, who resigned last week, the Defense Department will be helmed by Patrick Shanahan, an arms industry insider. Shanahan, the acting defense secretary as of Jan. 1, spent more than three decades at Boeing, the F-15 manufacturer which has earned further billions from lucrative service contracts in Saudi Arabia.

Pentagon officials said that in his current job as deputy defense secretary, Shanahan had recused himself from decisions involving Boeing.

Daniel Byman, a professor at Georgetown University’s School of Foreign Service, said that a more robust policy toward Saudi airstrikes would not just be good for Yemeni civilians — it would also help the Saudis.

“This war has been a strategic disaster for the Saudis,” he said. The airstrikes have shown no sign of defeating the Houthis, and the Houthis’ foreign ally, Iran, has gained from Saudi Arabia’s clumsy prosecution of the war.

“The United States needs to use its power to promote peace and stability in Yemen,” Byman said. “And it needs to protect its allies from themselves.”