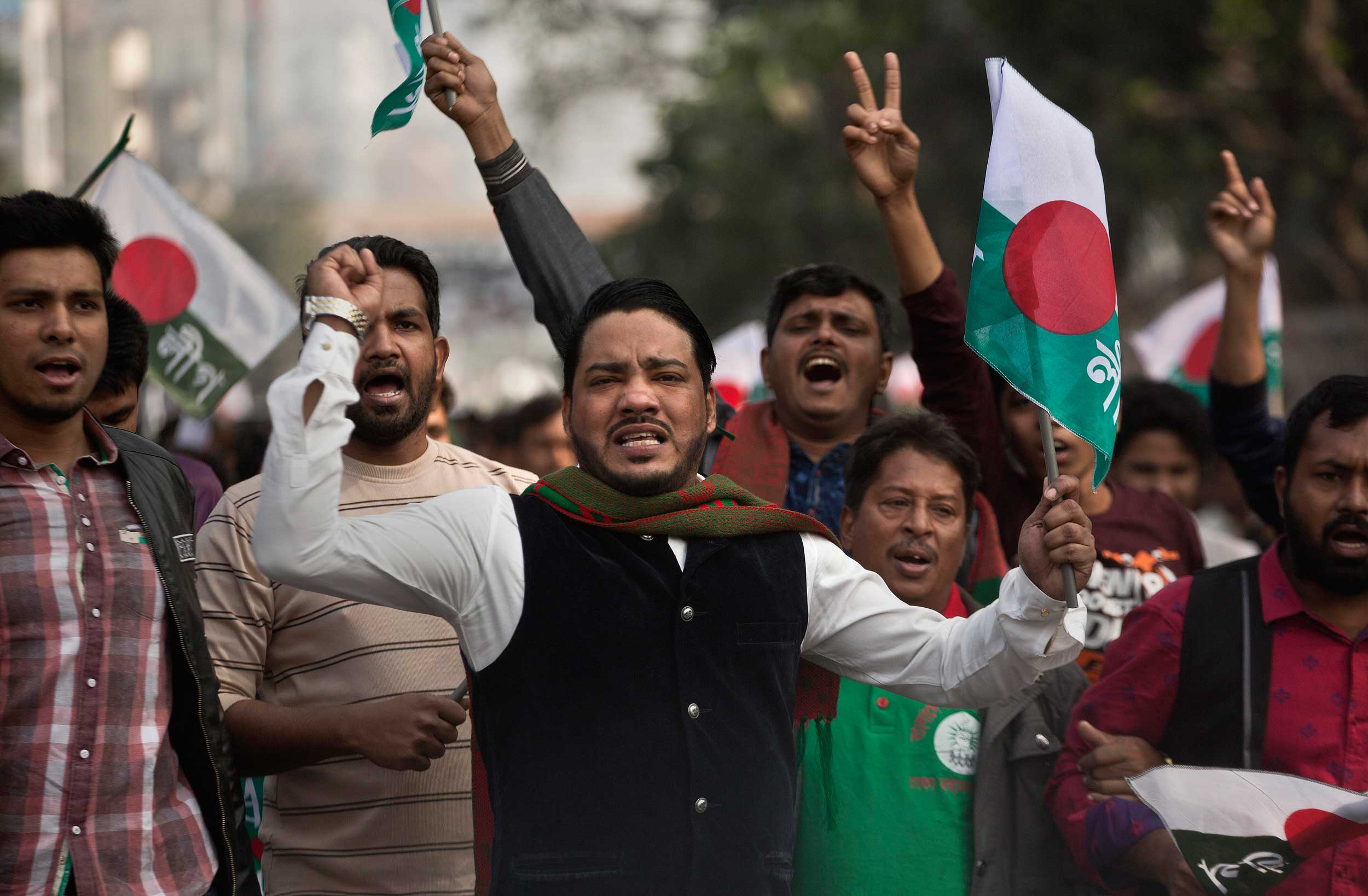 Supporters of Bangladesh Awami League shout slogans during an election rally ahead of the general elections in Dhaka on Thursday.
AP
Devadeep Purohit   |   Dhaka   |   Published 27.12.18, 07:32 PM

A lot has changed in Bangladesh during the 10-year rule of Sheikh Hasina, but one transformation that has pleasantly surprised New Delhi and Dhaka alike ahead of the December 30 polls is the complete absence of any reference to India from the campaign discourse.

“I doubt if anyone mentioned India even once during the campaign,” said a veteran of Bangladesh politics who did not wish to be named.

Officially campaigning can continue till 8am on Friday, but most candidates have got busy preparing for Sunday’s elections and stopped canvassing on Thursday evening.

Flanked by India on virtually all sides, the big neighbour and its policies on Bangladesh have always been potent campaign material for the Opposition Bangladesh Nationalist Party and its ally Jamaat-e-Islami.

A section in Bangladesh has often expressed disquiet over issues such as the high trade deficit with India, the Teesta water-sharing, the lopsided distribution of water from Farakka, alleged random firing by the BSF along the border and holding Bangladeshis responsible for problems in India.

As incumbent Prime Minister Hasina has always enjoyed a warm relationship with Delhi, she has often been labelled “pro-India”.

Recounting the narrative against Hasina and her Awami League, an Opposition veteran who is no longer with the BNP cited examples of how the Prime Minister’s rivals used to play the India card to polarise voters along communal lines.

“In campaign rallies, BNP and Jamaat leaders used to say azaan would stop at mosques if Hasina came to power…. They used to stoke anti-India feelings by predicting that (the neighbour) would grab (areas) up to Rajshahi if Hasina was voted to power. Lies about attacks on Muslims were told at poll meetings,” the leader recounted.

But none of these have found their way this time into the BNP campaign, which has been low-key. The BNP did not take part in the 2014 polls, but it made India a plank in all the preceding elections.

An observer said that after the formation of the Opposition grand alliance in October this year with the BNP at its core, he had expected it to up the anti-India rhetoric.

“I was fearing that issues like the NRC, cow vigilantism and the delay over the Teesta water-sharing might become campaign topics…. It’s a pleasant surprise that they are not a part of the discourse,” he said.

While analysts listed a number of factors to explain India’s omission from the campaign narrative, the change in the economic situation of Bangladesh, which has been witnessing a growth of over 6 per cent for a decade, is being seen as one of the main reasons.

“The anti-India approach as a campaign strategy has lost its traction and all political parties seem to have realised that they have to transact with India for mutual prosperity,” a source in Dhaka said.

“The two countries have signed 93 agreements in the past three years. The two Prime Ministers have met 10 times in three years…. The Indian PM himself received the Bangladesh PM when she visited India. The engagement at the top level has been extremely warm,” the source said.

The warmth, he said, has trickled down with increasing engagement at the people-to-people level with a record number of Bangladeshis visiting India and Indian companies making their presence felt in various sectors of the Bangladesh economy.

New Delhi’s repeated assertion through the diplomatic mission in Dhaka that it looked at the forthcoming elections as a matter to be decided by Bangladesh’s people also helped as it denied the Opposition a chance to accuse India of favouring Hasina.

The internal dichotomies in the Opposition camp under the National Unity Front, which includes parties such as the Gono Forum and the Jatiya Samajtantrik Dol besides the BNP, was cited as another factor.

“It’s a divided house and they lack direction. The likes of Kamal Hossain of the Gono Forum, who is the face of the Front, have not mentioned Ziaur Rahman, the founding father of the BNP, even once in their campaign while the BNP has always tried to cash in on Zia. Then, the constituents of the Front have no consensus on how to justify the presence of Jamaat candidates in the alliance. Amid all these differences, the India factor has gone missing,” said a source.