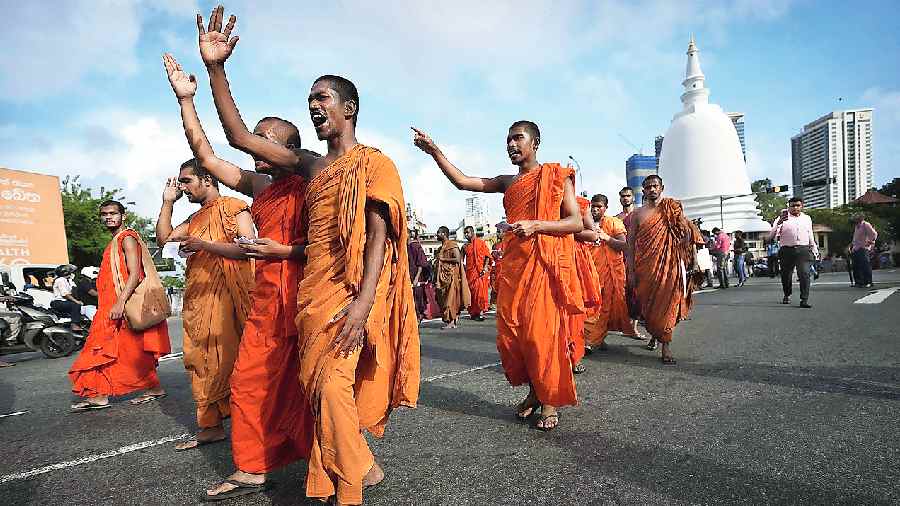 An International Monetary Fund (IMF) team began bailout talks in Sri Lanka on Monday, as the country’s cabinet cleared a constitutional amendment to dilute presidential powers that could assuage protesters amid rising tensions. Economic mismanagement and the Covid-19 pandemic have left Sri Lanka battling its worst financial problems in seven decades, and a lack of foreign exchange has stalled imports of essentials including fuel, food and medicines.

The island nation of 22 million people is scrambling to get fuel shipments in the next three days, the energy minister told Reuters, as public disaffection grows because of a persistent shortage of diesel and petrol. Sri Lanka’s cabinet on Monday approved an amendment to the Constitution that could reduce presidential powers, in a move to appease protesters calling for President Gotabaya Rajapaksa to quit.

“The 21 amendment was tabled and passed in cabinet today,” tourism minister Harin Fernando said in a tweet, adding that the proposal will now be sent to the country's parliament.Many protesters accuse Rajapaksa and his influential family of mishandling the economy. Sri Lanka suspended payment on $12 billion of foreign debt in April and is seeking up to $3 billion from the IMF to put its public finances on track and access bridge financing. A nine-member IMF team, which arrived in Colombo on Monday, held talks with Prime Minister Ranil Wickremesinghe on how to structure what will be Sri Lanka’s 17th loan programme with the global lender.“

The Prime Minister commenced discussions with the IMF team,” Wickremesinghe’s office said in a statement. But public distress at the prolonged shortages is growing. Protesters blocked an entrance to the finance ministry and police had to help out an official due to attend the IMF talks.

“The protesters were not letting him leave. So the police had to go in and get him out,” a government source who declined to be identified told Reuters.

The police said they had arrested 21 people for blocking the gates of the ministry, which adjoins the office of President Gotabaya Rajapaksa, outside which protesters have staged a sit-in since early April. Sri Lankans angered by long queues, often overnight, for fuel faced off with security forces over the weekend, and troops at two petrol stations fired shots in the air to control the crowds, military spokesman Brigadier Nilantha Premaratne said. Power and energy minister Kanchana Wijesekera said the country had only 12,300 tons of petrol and 40,000 tons of diesel.

“The central bank has released $90 million to purchase two shipments.”