Mitigation has overshadowed debate which is unfair to vulnerable countries, says Modi 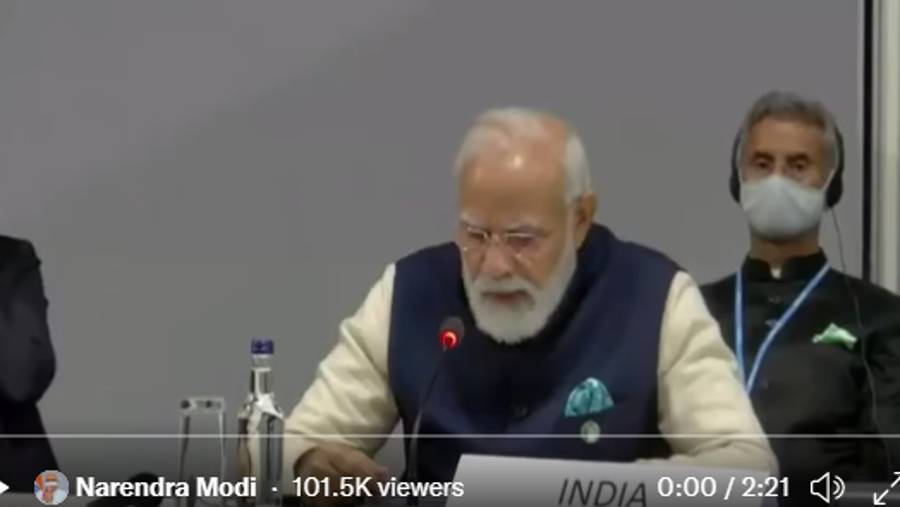 Prime Minister Narendra Modi said on Monday that climate adaptation has not got as much importance as mitigation in the international climate debate which is an injustice to vulnerable countries.

Speaking at a side event Action and Solidarity: The Critical Decade' at the 26th UN climate conference in Glasgow, Modi stressed on the need to include in the school syllabus the importance of living in harmony with nature as per traditional practices.

"Adaptation has not got as much importance as mitigation in the international climate debate. It is injustice to those countries which are highly vulnerable to climate change, he told the gathering.

"Many traditional communities have the knowledge of living in harmony with nature. In our adaptation policies, the traditional practices should be given importance. To ensure this knowledge reaches the next generation, it should be added to the school syllabus, Prime Minister Modi said.

He stressed that climate change is a huge challenge for the agriculture sector in developing nations, including India.

"Climate is a huge challenge for the farmers of developing nations including India. Cropping pattern is changing, untimely rains, floods and continuous storms are destroying crops. From sources of drinking water to affordable housing, all need to be made resilient against climate change, he said.

Talking about the importance of climate adaptation, Modi said it should be made the most vital part of the policies.

"Climate adaptation has to be made the most vital part of our policies. In India, policies like tap water for all, Clean India Mission and clean cooking fuel for all have given adaptation benefits to the needy as well as improved their quality of life, he said.

"Even if the ways of adaptation are local, developing countries should get global support for it. India initiated the Coalition for Disaster Resilient Infrastructure CDRI for global support to local adaptation. I urge the countries to join this initiative," he added.