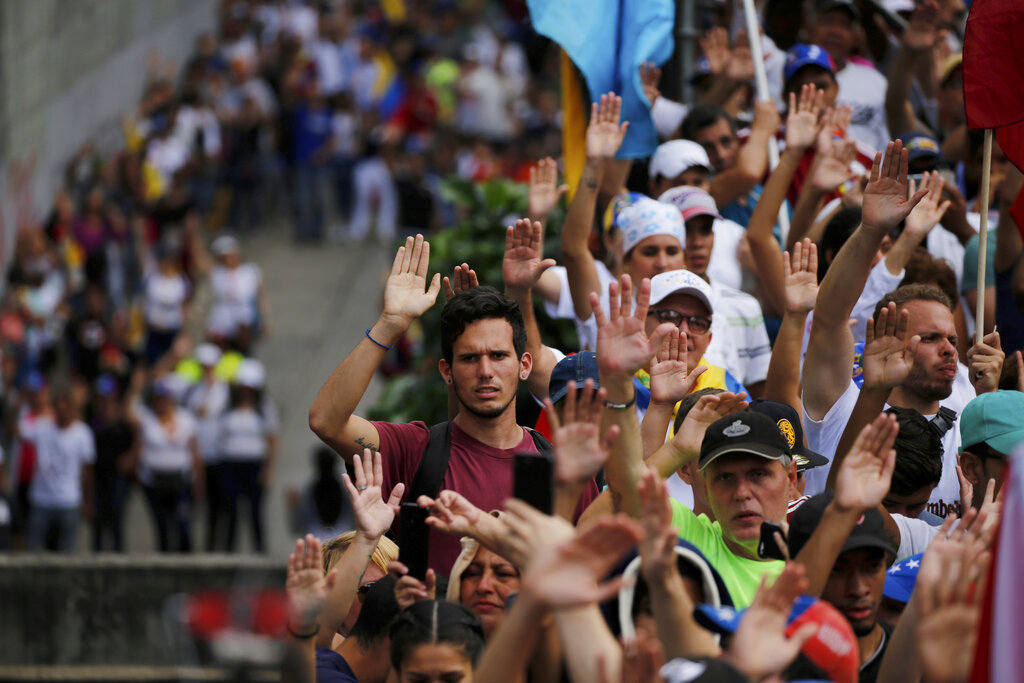 Anti-government protesters during the symbolic swearing-in of Juan Guaido at a rally demanding President Nicolas Maduro's resignation in Caracas, Venezuela, on Wednesday.
AP
AP   |   Published 24.01.19, 11:37 AM

A 35-year-old Opposition leader who up until two weeks ago was a complete unknown to the vast majority of Venezuelans has declared himself the embattled nation's interim President as leader Nicolas Maduro clings to power. Here's a look at what happened in Venezuela on Wednesday:

After years of infighting, Venezuela's Opposition united behind Juan Guaido earlier this month and began calling for mass protests to be held on Wednesday demanding President Nicolas Maduro give up power after being sworn in for a contested second term January 10.

Though the Opposition has struggled to motivate tired and sceptical Venezuelans since months of unrest in 2017 resulted in 120 dead, Guaido managed to strike a nerve by laying out in simple terms a plan of action for a new government.

He argued to Venezuelans that as president of the National Assembly, he has the authority under the Constitution to step in when the chief executive office is vacated. He contends Maduro's re-election last May was fraudulent and should not be recognised.

On Wednesday, tens of thousands heeded the call to take to the streets across Venezuela, a turnout fed by widespread anger over Venezuela's runaway inflation and shortages of food and medicine.

Juan Guaido speaks to supporters at a rally where he declared himself interim President until new elections can be called in Caracas on Wednesday.
AP

Guaido capped the protest with a speech before a swarm of supporters in which he took a symbolic oath swearing himself in as interim President, saying he was upholding the constitution by assuming the top post.

Dressed in jeans and a blue blazer, the young leader told a jubilant crowd that he would work to restore democracy and continue fighting until all Venezuelans have bread on the table, electricity at home and medicine in their hospitals.

The Trump administration quickly responded by recognising Guaido as President. Over a dozen nations in the region followed suit. Only a handful of countries that have long backed Maduro said they would continue to back the socialist leader as president.

Guaido has already begun taking action as if he is President. However, neither the military nor any branch of government aside from the Opposition-controlled legislature has signaled that they will recognise him as leader.

Nicolas Maduro announces he is breaking relations with the US to supporters from a balcony at the Miraflores presidential palace in Caracas on Wednesday.
AP

The socialist leader who took the helm of Venezuela's presidency following the death of Hugo Chavez in 2013 announced that he was severing diplomatic relations with the United States in response to its recognition of Guaido.

In a speech from a balcony of the presidential palace, Maduro stood by his position that he was legitimately elected and gave US diplomats 72 hours to leave the nation. Socialist party heavyweight Diosdado Cabello and other high-ranking allies pledged to stand behind Maduro and denounced Guaido.

Adding to the growing confrontation, the US government announced on Wednesday night that it will ignore Maduro's order and keep its diplomats in Caracas.