In Germany, where anti-Semitic crimes have also surged, the authorities publicly warn that far-Right extremism and terrorism are the biggest threat to democracy 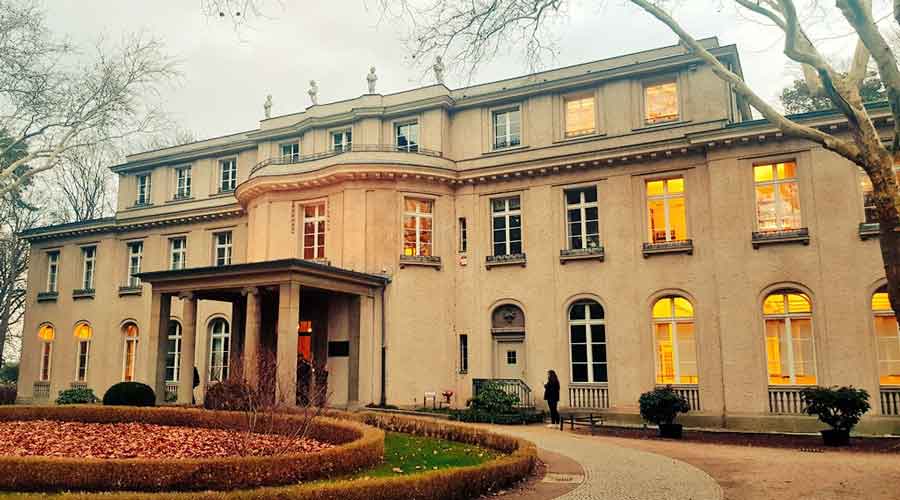 On January 20, 1942, 15 high-ranking officials of the Nazi bureaucracy met in a villa on Lake Wannsee on the western edge of Berlin. Nibbles were served and washed down with cognac. There was only one point on the agenda: “The organisational, logistical and material steps for a final solution of the Jewish question in Europe.”

Planning the Holocaust took all of 90 minutes.

Eighty years after the infamous Wannsee Conference that meticulously mapped it out, the bureaucratic efficiency of it remains as unnerving as ever.

The minutes taken that day and typed up on 15 pages do not explicitly refer to murder. They use phrases like “evacuation” and “reduction” and “treatment” — and divide up the task among different government departments and their “pertinent specialists”.

“You read that protocol, and it’s chilling,” said Deborah E. Lipstadt, a renowned Holocaust scholar. “It’s all very camouflaged language. But then you look at the list of countries and the number of Jews they planned to kill. Eleven million people they were going to go after. They had very big plans.”

The anniversary of that fateful meeting has a special resonance at a time when survivors of the Holocaust are dwindling and anti-Semitism and the ideology of white supremacy are resurgent in Europe and the US, along with attacks targeting Jewish people and ethnic minorities.

In Germany, where anti-Semitic crimes have also surged, the authorities publicly warn that far-Right extremism and terrorism are the biggest threat to democracy.

Today the three-storey villa on the lakeshore that once served as an SS guesthouse and hosted the Wannsee Conference looks largely unchanged on the outside. Set back from the road in the middle of sprawling gardens, it greets visitors with a majestic front portico and four statues of cherubs dancing along the roof.

For decades, the West German authorities struggled with what to do with the building. As survivors pressed the government to turn it into a place to learn about the Holocaust and document the crimes of the perpetrators, officials stalled. Some said they worried that it would become a place of pilgrimage for old Nazis, others pondered razing it altogether “so that nothing of this house of horror remains”.

Joseph Wulf, a Jewish resistance fighter who escaped an Auschwitz death march and became a respected historian after the war, led the early campaign to repurpose the villa into a memorial and historical institute. Above his writing desk he had pinned a note to himself in Hebrew about the six million Jews that were murdered by the Nazis: “Remember!!! 6,000,000.”

Wulf was repeatedly rebuffed and in a letter to his son in 1974 expressed his despair: “You can provide the Germans with evidence until you’re blue in the face,” he wrote. “The most democratic government may exist,” he continues, “and yet the mass murderers walk around freely, have their little houses and grow flowers.”

He killed himself a few months later.

Until the 1980s, the villa was a youth hostel for school trips. Only after reunification, in 1992, did it open as a memorial.

“We like to think of ourselves as champions of remembrance in Germany,” said Jan Beckmann, a historian who leads guided tours at the Wannsee villa today. “But it took decades. It took a generation, really.”

To many, the anniversary of the Wannsee Conference is less salient than the liberation of Auschwitz or the uprising in the Warsaw Ghetto, which focus on the victims of Nazi terror. But it stands out as a rare date — and memorial — to focus on the perpetrators of the Holocaust, documenting the genocidal machinery of the Nazi state.

The host on that January day in 1942 was Reinhard Heydrich, the powerful chief of the security service and the SS, who had been put in charge by Hermann Göring, Hitler’s right-hand man, of a “final solution” and coordinating it with other government departments and ministries.

The men Heydrich invited were senior civil servants and party officials. Most of them were in their 30s, nine of them had law degrees, more than half had PhDs.

When they convened around a table overlooking Lake Wannsee, the genocide was already underway. The deportations of Jews and mass killings in eastern territories had begun the previous fall but the meeting that day laid the groundwork for a machinery of mass murder that would involve the entire state apparatus and ultimately millions of Germans in different roles.

“That’s where the bureaucracy fell into place,” Lipstadt said.

Adolf Eichmann, head of the department for “Jewish affairs and eviction” in the interior ministry, who would later organise the deportations to the death camps, was asked to take minutes at the meeting. Only one of 30 copies of his 15-page protocol, marked in red as “secret” on the first page, survived.

Eichmann’s protocol summarised the scope of the task in a detailed statistical table of Jewish populations across Europe, including not just the Soviet Union, but England, Ireland and Switzerland.

“With appropriate prior authorisation from the Führer, emigration has now been replaced by evacuation of the Jews to the East as another possible solution,” the protocol noted. “In the course of this final solution of the Jewish question, roughly 11 million Jews will be taken into consideration.”

The document then proceeded to lay out in some detail what that final solution would look like.

“Under appropriate supervision, the Jews are to be utilised for work in the East in a suitable manner,” it said. “In large labour columns, separated by sex, the Jews capable of working will be dispatched to these regions to build roads. In the process a large portion will undoubtedly drop out through natural reduction. Those who ultimately remain must be given suitable treatment because they unquestionably represent the most resistant parts.”

“The evacuated Jews will first be taken, group by group, to so-called transit ghettos, from where they will be transported onward to the East,” it continued. “With regards to the manner in which the final solution will be carried out in those European territories which we now either control or influence, it has been suggested that the pertinent specialists in the Foreign Ministry should confer with the responsible official of the Security Police and the SD.”

It was the language of bureaucrats. But there was never any doubt what the document was laying out: “The complete elimination of the European Jews,” as Joseph Goebbels, Hitler’s chief propagandist, wrote in his diary after reading the minutes.

Frank-Walter Steinmeier, Germany’s current President and a former foreign minister who has spent decades working with the German civil service, expressed his profound unease and horror after he read the protocol during a visit to the villa this week: the style and language of the document was utterly familiar to him.

“What we see is a smoothly functioning administrative machine, departments coordinating, templates and procedures which — apart from the content of the meeting — are indistinguishable from those that we still have in ministries and administrations,” he said in a speech later. “It is the ordinary, the familiar, that jumps out at us, horrifies us and unsettles us.”

The 15 participants of the Wannsee Conference all took part in the Holocaust in direct ways. Some commanded or organised murder squads, others built the legal framework for genocide.

Six of them had died by 1945. Only two of them stood trial for their role in the Holocaust after the war. Eichmann was executed in Israel after hiding in Argentina for years. Wilhelm Stuckart, co-author of the Nuremberg race laws, was released in 1949.

Three others were tried for unrelated offences and given mild sentences. And four were never charged at all. Gerhard Klopfer, a senior official in Hitler’s chancellery, worked as a lawyer for decades after the war. When he died in 1987, his family published a death notice that celebrated “a fulfilled life that was to the benefit of all those who came under his sphere of influence”.

4 Indians freeze to death near US border