44 US students infected after party 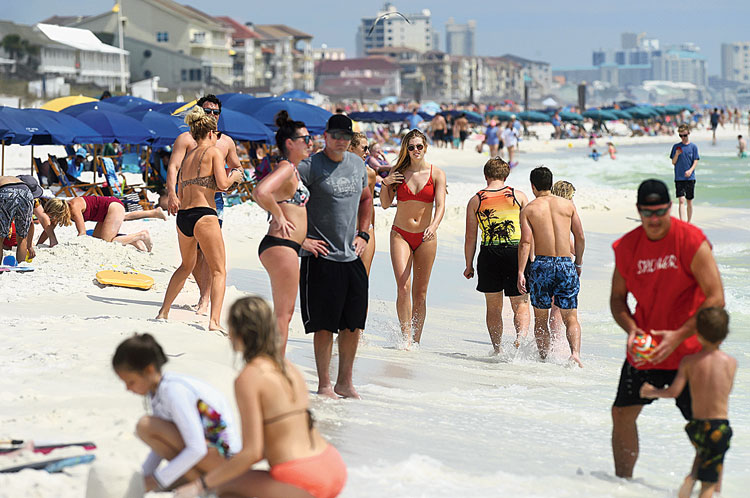 Two weeks ago, amid the coronavirus pandemic, about 70 students from the University of Texas at Austin partied in Mexico on spring break. The students, all in their 20s, flew on a chartered plane to Cabo San Lucas, and some returned on separate commercial flights to Texas.

Now, 44 of them have tested positive for the virus and are self-isolating. More students were monitored and tested on Wednesday, university officials said, after 28 initial positive tests.

The Austin outbreak is the latest to result from a group of college students who ignored social-distancing guidelines, went on traditional spring break trips and have now tested positive for the coronavirus.

Many of them appeared to be under the mistaken impression that young people are not as likely to get the coronavirus as older people are. Students at the University of Tampa, the University of Wisconsin-Madison and other colleges have tested positive after returning from spring break trips to Florida, Alabama, Tennessee and elsewhere.

The defiant attitude, at a time when millions of Americans were hunkered down at home and staying away from school, work and relatives, was embodied by Brady Sluder, a young man on spring break in Miami who declared from a packed beach: “If I get corona, I get corona. At the end of the day, I’m not going to let it stop me from partying.” Sluder, whose TV interview was shared widely, later apologised on Instagram.

In Austin, health officials with the city government and the university have contacted every young person who was on the chartered plane, using flight manifests shared by the Centers for Disease Control and Prevention, the authorities said.

City health officials used the case to urge residents of all ages to stay home and to avoid non-essential travel. At least four of the 44 students who tested positive had not shown any symptoms of the coronavirus.

“The virus often hides in the healthy and is given to those who are at grave risk of being hospitalised or dying,” Dr. Mark E. Escott, the interim medical director and health authority for the city of Austin and Travis County, said in a statement. “While younger people have less risk for complications, they are not immune from severe illness and death from Covid-19,” the disease caused by the coronavirus.

“The incident is a very strong reminder of the importance of taking seriously the warnings of public health authorities on the risks of Covid-19,” said J.B. Bird, director of media relations at the university.

The state’s flagship university has been hit hard by the virus.

Its president, Gregory L. Fenves, announced last month that his wife had tested positive, and that his family was self-isolating. Fenves’s wife, Carmel, began exhibiting flulike symptoms after the couple travelled to New York City for events with alumni and students. Fenves’s tests later came back negative.

The group of roughly 70 students departed from the Austin airport on March 14 and many of them returned on March 19.

The trip was organised by a company called JusCollege, which bills itself as a “one-stop shop” for spring break and college-oriented trips.

“I’m not going to judge those students’ decision,” said Camron I. Goodman, 24, the university’s student government president. “A lot of students had to make some tough decisions about their spring break plans.”

On Wednesday, JusCollege’s website still included an event listing for “Cabo Spring Break 2020” from February 23 to April 10. “Join us as we take over Cabo San Lucas for Spring Break 2020!” the listing reads. “Place your deposit to lock in best pricing.”

The Austin television station KVUE posted emails that the company sent to students in the days before the trip, assuring them that spring break was still on and was still safe.

One of the emails, sent by the company on March 3, read, “We believe that our travel destinations remain among the safest and most enjoyable places in the world to visit right now.”