Youth’s desperate hunt for job and documents for survival 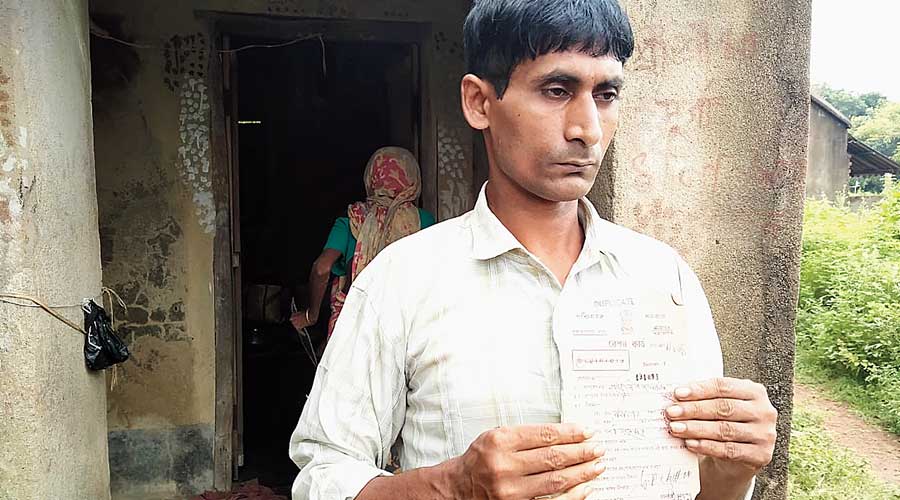 Gangadhar Pramanik with his ration card in front of his house on Thursday
Telegraph Picture
Snehamoy Chakraborty   |   Bolpur(Birbhum)   |   Published 17.09.21, 04:19 AM

Gangadhar Pramanik, the 33-year-old from Bankura who returned to his village on Wednesday after spending three years at a detention centre in Assam’s Goalpara, may be a free man now, but he knows that there are more challenges facing him.

For the school dropout, who doesn’t possess any specific skill, the immediate concern is to find a job to survive along with his ailing mother Bharati. The other challenge is equally daunting as he has to get documents to prove his Indian citizenship.

“I am happy to have walked free from the detention centre but I have many hurdles to cross before I can get absolute freedom. I need a steady job to feed myself and my ailing mother. My mother also needs treatment for her oldage ailments. I also need to get legal documents to prove that I am an Indian citizen,” Gangadhar told The Telegraph from his village at Radhanagar in Bankura’s Bishnupur.

The story of Gangadhar’s life is like any other migrant worker from Bengal. Around 10 years ago, he had left his remote village in Bankura with the hope to make enough savings for his struggling family that consisted of his parents and an unmarried sister. He worked hard at an eatery, on the outskirts of Guwahati, but life took a terrible twist on December 12, 2017, when he was declared a foreigner by one of the several Foreigners Tribunals in Assam and thrown into a detention camp at Goalpara.

Gangadhar was found guilty of not responding to a notice asking him to prove his citizenship and also for not having requisite documents to prove himself as an Indian. The Bankura youth managed to walk out of detention on bail following the chance intervention by the Citizens for Justice and Peace (CJP), an organisation pursuing cases of those spending life in the camps.

The time spent at the camp has left Gangadhar so traumatised that he hardly interacted with villagers even as he went around Radhanagar looking for odd jobs on Thursday.

“I desperately need to earn some money. I went to a twowheeler repairing shop near our village and asked for a job. The owner agreed to give me a job but the wage he offered is not enough to survive. I need a steady income as my mother is unwell and our house is dilapidated,” he said as he struggled to put across his words.

Officials of the local Radhanagar gram panchayat, however, turned up at his home to provide Gangadhar with some relief. They gave him 24 kg rice and Rs 2,000 in cash as immediate help. A few villagers have also offered to stand by the family till Durga Puja by providing them with clothes and food.

“We are also trying to raise funds to repair their house,” said Ashis Dey, a neighbour and social activist at Radhanagar village.

While Gangadhar welcomed the support of the panchayat and his neighbours, he said he was aware that all this support was temporary and he had to start earning.

“I thank all who have helped me, but I need a steady job immediately,” he said.

Radhanagar gram panchayat officials said they wanted to help Gangadhar but were unable to assign him a job under the 100 days’ programme as he did not have the required documents to get a job card or open a bank account.

“He only has a ration card and that too is very old. He does not have documents like Aadhaar or voter identity cards. These documents are needed to provide him with a job under government schemes,” said Suchitra Samaddar, the chief of Radhanagar gram panchayat.

Gangadhar said he desperately needed the documents to survive as well as to prove his Indian citizenship to free himself from the case pending against him at the Foreigners Tribunal in Assam.

“I know I need such documents but I don’t know the process to get them. I have an old ration card and would request the government to help me out of the crisis,” he said.

CJP activist Nanda Ghosh, who had accompanied Gangadhar to his home in Bankura on Wednesday, said the documents were necessary because they wanted to move court and show how innocent people were being harassed at detention centres by labelling them as foreigners.

“He is now out on bail and can live at his village peacefully. But we have a plan to move the court to show Gangadhar’s case as an example of how genuine Indians are being tortured in Assam,” said Ghosh, who heads the Assam chapter of the CJP.

Bishnupur SDO Anup Kumar Dutta has promised to help Gangadhar get his documents. “I heard about the person and have asked an official to know what kind of documents he has so far. We will help him to get his required documents in accordance with law,” said Dutta.