The cops had picked up Mohammad Arman Ansari, a resident of Barakar, on Monday night in connection with a theft case 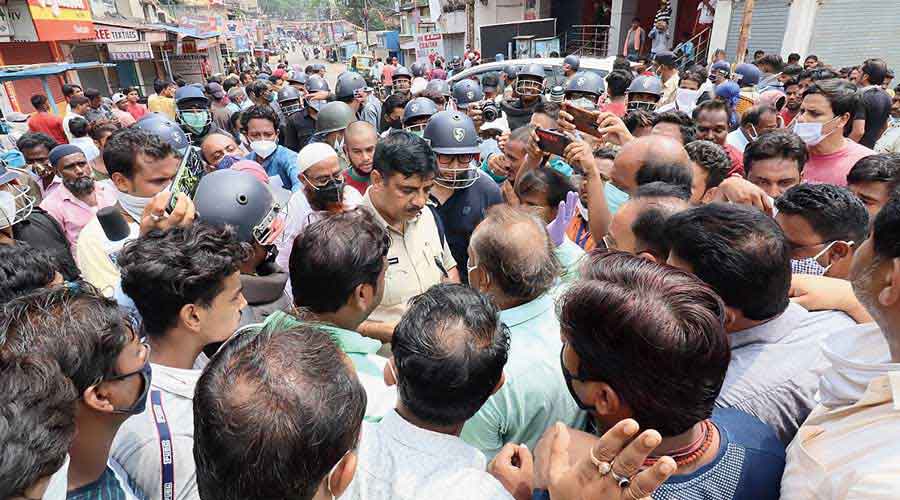 The police try to pacify the protesters at Barakar in West Burdwan on Tuesday.
Santosh Kumar Mandal
Abhijeet Chatterjee   |   Asansol   |   Published 07.07.21, 01:11 AM

A 28-year-old youth’s death in police custody on Tuesday sparked off violence with a mob torching a jeep of the law enforcers and two motorbikes parked at Barakar police outpost in West Burdwan.

Kulti police had picked up Mohammad Arman Ansari, a resident of Barakar, on Monday night in connection with a theft case. The police found him lying unconscious at the lock-up on Tuesday morning and rushed him to Asansol district hospital where doctors declared him dead on arrival.

Around 11am, about 100 relatives and friends of Arman barged into the Barakar police outpost, where he had initially been taken for interrogation before being shifted to the Kulti police station lock-up.

Accusing the police of killing Arman in custody, the mob ransacked the outpost and torched a police jeep and two motorcycles parked on the premises. They also pelted the law enforcers with stones when they tried to pacify the mob. Outnumbered by the mob, who took over control of the area, policemen ran to save their own lives. The angry protesters blocked the road outside the police outpost and the Barakar-Purulia road. 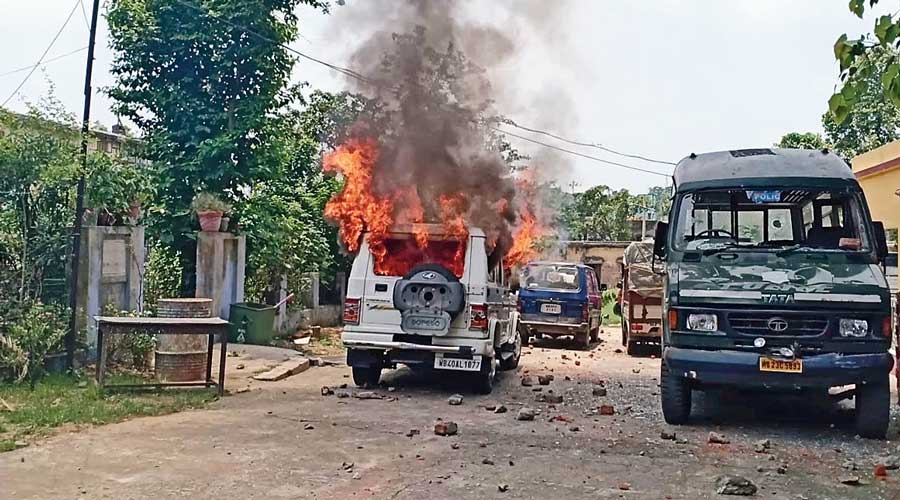 A vehicle set ablaze in the violence.
Santosh Kumar Mandal

“My son was picked up last night by the police for no reason. When I went to Barakar police outpost this morning to enquire about him, they sent me to Kulti police station,” said Mohammmad Abdul Kalam, the victim’s father.

On reaching Kulti police station, he said, the inspector-in-charge, Ashim Majumdar, offered him drinking water and tea and later informed him that his son had died.

“The IC told me that my son had been picked up as a suspect in connection with a theft case. He scuffled with some inmates inside the lock-up at Barakar outpost and was later shifted to Kulti for security reasons, said the IC. He (Arman) fell sick this morning and after taking him to hospital, the doctors pronounced him dead,” said Kalam.

Blaming the police for torturing Arman in the lock-up, an inconsolable Kalam asked: “My son was physically fit. How could he have died unless the police tortured him?”

Sources said Arman had earlier been arrested by the police on charges of theft and was later released on bail. “Arman was earlier involved in theft cases and was out on bail. We picked him up along with two more suspects. They scuffled inside the lock-up. So, we shifted Arman to Kulti police station for his security,” said a police officer.

“The youth was picked-up for interrogation last night in connection with several theft cases. He suddenly fell sick and died this morning. We have initially suspended the in-charge of the outpost and another sub inspector. A departmental inquiry is on and the situation is under control now,” said Thakur.

The victim’s body will be handed over to the family on Wednesday after an autopsy at the Burdwan Medical College and Hospital.