Writing on the civic body wall

A gazette notification now hanging on the first floor notice board at Bidhannagar Municipality announces a proposal for the formation of a municipal corporation with more areas added. Snehal Sengupta weighs the consequences 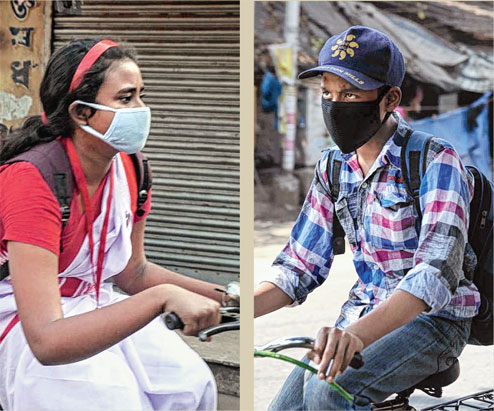 The rest of the state may have voted and sworn in parties to their respective municipalities, but there is still no telling when residents of Salt Lake will get to vote.

The government wants the elections to be held after the formation of the corporation.

The decision to form the corporation was announced in a notification of The Kolkata Gazette published on April 1. It said that the combined areas of Salt Lake, Rajarhat Gopalpur Municipality and Mahisbathan II gram panchayat with an area of 65.5 square kilometres fulfiled the criteria to form a municipal corporation. It had a population of 6,33,909 as per 2011 census figures and a population density is 9,678 persons per square kilometre. More than three-fourth of the adult population in the area is engaged in non-agricultural occupations. The headquarters of the proposed corporation would be Salt Lake, the notification said.The gazette has called for objections and suggestions from residents within 90 days from the date of publication.

In the Lok Sabha elections last year Trinamul Congress (TMC) lost in 21 of the 25 wards in Salt Lake, trailing by 6,489 votes. Municipality insiders say that a major incentive for creating the corporation is to increase the voter base to include more support blocs of the ruling party.

“Since the party knows it is lagging behind in Salt Lake it is pulling in voters from regions where they have a more solid support base,” said a municipal source. TMC is in power in the Mahisbathan II panchayat.
In Rajarhat-Gopalpur Municipality, elections are overdue by two years. Insiders say this is because the party is worried that its votes would get divided due to infighting within the party in the area.

Besides Salt Lake and Rajarhat Gopalpur, five more municipalities are awaiting elections — Raniganj, Jamuria, Asansol and Kulti in Burdwan and Bally in Howrah. The excuse is the same: the government wants them to convert them all to corporations before going to polls.

Pranay Roy, a resident of Calcutta, had filed a PIL against this decision in the high court earlier this year and on April 16 the court ruled in his favour.

A division bench of Calcutta High Court, led by Chief Justice Manjula Chellur and Justice Joymalya Bagchi, directed the state to hold elections within two months in the seven civic bodies. “The delay of the elections is illegal.... The process should be concluded within two months of receiving the copy of the court order,” the chief justice said. The bench also directed the state election commission to start the process of holding elections with “immediate effect”.
But little progress has taken place since that order. “I have not received any communication regarding elections in Salt Lake and Rajarhat-Gopalpur. But I have been informed about the notification about converting it into a corporation. Residents are free to submit their objections regarding this,” said Manmeet Kaur Nanda, the newly appointed district magistrate of North 24-Parganas. She refused to comment whether the elections would be held in two months or on a later date.

But TMC is possibly not ready to go for polls immediately. “We will appeal in the Supreme Court against the high court ruling. We will ensure elections are held only after conversion to a corporation. A corporation will enable us to offer better services to the people,” food and supplies minister Jyotipriyo Mullick told The Telegraph Salt Lake on Tuesday.

Salt Lake residents are up in arms at the thought of being clubbed with the rural regions. “This is all vote bank politics. The demography of the three areas is vastly different and it would be disastrous to merge them,” said a GD Block-based lawyer, Arunangshu Chakraborty.

Members of Salt Lake Welfare Association are planning to hold a open forum of residents to discuss the proposal. If the majority is against the idea, they would file an objection with the authorities.

“Mahisbathan II and Rajarhat Gopalpur Municipality lag behind Salt Lake in terms of development and in order to bring equity among all areas of the corporation, maximum funds would go to uplift their conditions. Salt Lake will be neglected in the bargain,” said general secretary of Salt Lake Welfare Association, Kumar Shankar Sadhu. “Also, how will they bring uniformity in the property tax structure since unlike in the other areas, we are lessees and not owners of houses in Salt Lake?” he pointed out.