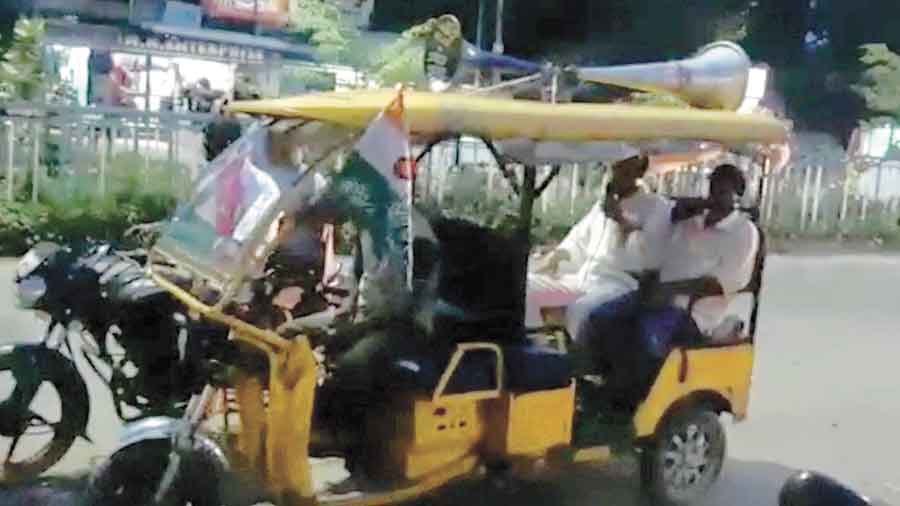 Trinamul workers roam around at Raghunathpur in an erickshaw on Monday.
Purnabh Mahato
Snehamoy Chakraborty   |   Purulia   |   Published 11.08.21, 01:43 AM

An embarrassed Trinamul Congress leadership in Purulia has sought an explanation from party leaders in Raghunathpur after a few workers went around the industrial town on an e-rickshaw on Monday and asked people not to pay bribe or “cut money” to anyone to get benefits under various government schemes.

The party workers also pleaded with the people to bring such incidents to the notice of the local authorities or Trinamul leaders so that the accused could be brought to book.

“We have already sought a report from our leaders as to why such an announcement was made and who gave the permission as the programme had not been endorsed by the party. The incident has tarnished the image of the party. Once we get the inquiry report, we will take stern action against those involved in the incident,” said Nabendu Mahali, the district Trinamul spokesperson.

Sources said local residents of Raghunathpur town were taken by surprise when an erickshaw decorated with Trinamul flags and equipped with a public address system went around alerting people regarding cut money.

“Honourable chief minister Mamata Banerjee has never supported the practice of taking cut money….(we are campaigning) to stop the practice of cut money. If anyone asks for a share of the fund that an individual gets under the housingforall scheme, we request the person to inform the administrator of the civic body or SDO Raghunathpur or Trinamul leaders immediately. We assure you that stern action will be taken against the culprits,” a Trinamul worker who was part of the team that went around Raghunathpur on Monday said.

Trinamul insiders said the issue of cutmoney had snowballed into a serious trouble for the party in the middle of 2019 when a large number of party leaders at the district level had to face people’s ire. The issue had prompted Mamata to warn her colleagues at the grassroots level against the practice. She had even asked Trinamul leaders who had taken cut money to refund it.

Trinamul sources said an internal feud of the party was behind the incident that caused much embarrassment to senior Trinamul leadership.

“I have heard about it but am not aware of the incident. You can speak to town president Bishnu Charan Mahata on the issue,” said Madan Barat, the chairperson of board of administrators of Raghunathpur municipality.

Mahata did not take calls or reply to a text message from this correspondent.