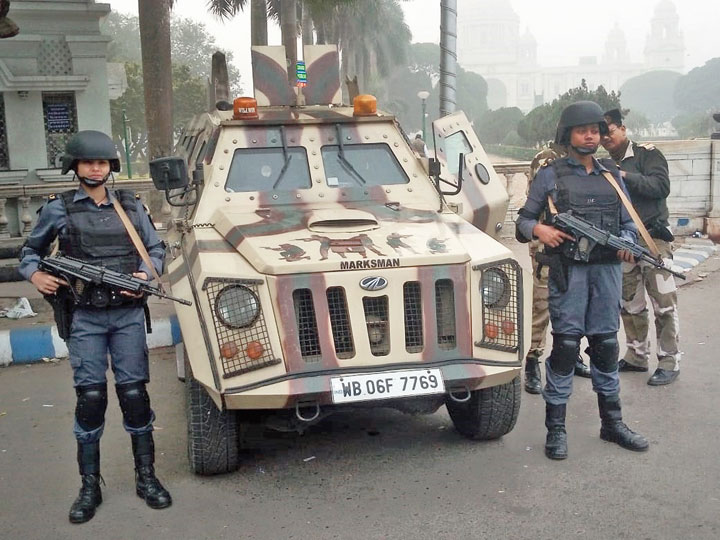 Some of the women constables of Calcutta police’s 'Combat Warriors' deployed in the city on Tuesday
Telegraph picture
Our Special Correspondent   |   Calcutta   |   Published 24.12.19, 08:34 PM

A team of 30 women constables, trained in strategic and operational warfare, were deployed at several points across Calcutta on Tuesday as part of Calcutta police’s “Combat Warriors”.

Over the next few days these women will be part of Calcutta police’s Quick Reaction Team (QRT), whose duty will be to intervene during an emergency, a senior officer at Lalbazar said. Subsequently, they will be deployed as part of specialised combat forces when a situation will require “armed intervention”.

The women made their debut on Tuesday. Perched on combat vehicles, they kept watch on Park Street and the areas around Victoria Memorial and Indian Museum.

Sources at Lalbazar said the 30 women were selected from a batch of 200 that underwent training at Special Forces Training Centre in Police Training School in Alipore. They were groomed by officers trained by the army.

The constables were put through two months of “endurance training”, which included rappelling and slithering.

“All these women are experts in handling sophisticated arms, including the AK-series guns,” said an officer of the combat force, which carries out rescue operations from tunnels, waterways and highrises and helps the reserve force of Calcutta police handle riot-like situations.

The women have also been trained in assembling arms, handling improvised explosive devices and tactical movements.

Police commissioner Anuj Sharma met the batch before the “warriors” went out on their duty.