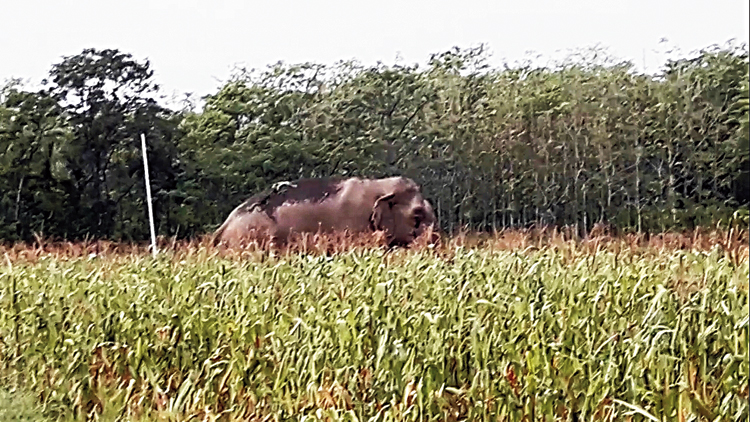 An adult wild “makna” (male without tusks) elephant was found dead at Takimari in the Rajganj block of Jalpaiguri district on Monday.

Foresters suspect the animal was electrocuted. It had strayed out of the adjoining Baikunthapur forest, they said. Seven persons have been arrested in connection with the animal’s death

On Sunday night, some local people had spotted the elephant coming out of the forest and entering the adjoining paddy field. On Monday morning, they spotted its body in the area and informed foresters.

Senior officers of Baikunthapur forest division went to Takimari that is close to the Teesta river and checked the carcass.

“There are earlier instances of elephant deaths from electrocution in the area. A section of farmers put electric wires in their plots to save crops. We have found cables and batteries near the spot,” said Sanjay Dutta, range officer of the special task force of the state forest department.

Few years ago, a number of elephants had been electrocuted in different areas of Rajganj block. This had made the forest department launch an awareness campaign in the area in association with NGOs and wildlife conservationists.

“The practice had stopped for quite some time but again, it has started. People should understand that laying a live wire that can cause death to an elephant is an offence. Our department provides compensation to farmers for loss of crop in elephant depredations. But a section of farmers appear to be desperate,” said Dutta.

After the carcass was recovered, the foresters called in vets who conducted post-mortem on the spot. “We are waiting for the autopsy report to know the exact cause of the death,” said a forester.

In course of the investigation, the officers zeroed in on seven persons, including three women, who had allegedly laid the livewire in agricultural fields. All of them have been arrested and searches are on to round up four others.

In another incident, a tusker strayed out of the Rydak forest of the Buxa Tiger Reserve in Alipurduar district on Monday morning. It strayed into some of the villages like Beltala, Biswaspara and Dhawlajhora and damaged corn fields. Officers of North Rydak forest range reached the spot and steered the animal back into the forest. The loss of the crop is yet to be estimated, they said.