Wife and lover arrested for murder of spouse, kids in North Dinajpur

According to police sources, the victim’s wife Mauri got into an affair with Kishan, another worker at the BSF camp who hails from Uttar Pradesh 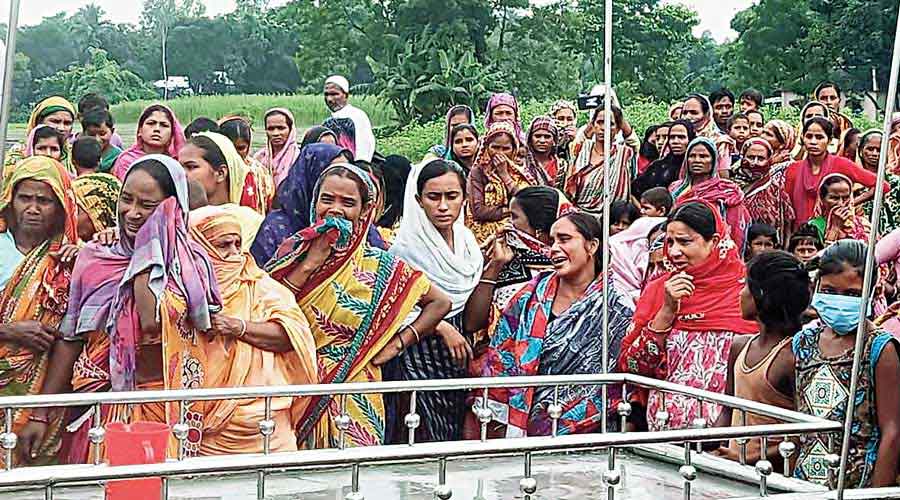 A labourer and his two minor sons hailing from a village in North Dinajpur district were killed allegedly by his wife and a co-worker, with whom she apparently has an affair, in Punjab on June 28.

On Friday, the bodies of Mangu Sheikh, Ali Sheikh, 8, and Sohail Sheikh, 6, reached Hatia-Palibari village, on the outskirts of Raiganj town, from Faridkot in Punjab.

Sources said Mangu, 30, had moved to Faridkot four years ago, along with his wife and three children and worked as a contractual worker at a local camp of the Border Security Force (BSF). Aduri, Mangu’s daughter, somehow managed to escape the attack.

According to police sources, the victim’s wife Mauri got into an affair with Kishan, another worker at the camp who hails from Uttar Pradesh.

“Preliminary probe suggests that the couple used to have frequent brawls after Mangu came to know about the affair. Around one-and-half months’ back, Mauri left her husband’s place and started staying with Kishan,” said a police source.

Last month, the duo planned to kill Mangu and their three children. “On the night of June 28, the duo got into Mangu’s accommodation and killed him and his two sons. Their daughter Aduri, 10, somehow managed to escape and took shelter in the BSF camp. The duo hung their bodies in the house after killing them and fled,” the police source added.

Later, the police arrested  Mauri and Kishan following a statement from Aduri and recovered the bodies.

Meanwhile, 10-year-old Aduri spoke to the BSF personnel of the camp and mentioned that her mother and Kishan have killed her father and two brothers. The BSF men immediately informed the police who rushed to the spot and recovered the bodies. They also initiated a probe and launched a search for Mauri and Kishan. Both of them were arrested.

The last rites of the trio was conducted in the village on Friday and was attended by hundreds of residents.

A villager informed that Aduri was under the protection of Punjab police now. “We want exemplary punishment for Mauri and Kishan. What they have done is inhumanact that they did not spare two little boys and also tried to kill the girl.”