Advertisement
Home / West-bengal / Learn from Bengal how to dodge the anti-defection law
Speaker to hear Mukul Roy's case on Aug. 17

Learn from Bengal how to dodge the anti-defection law 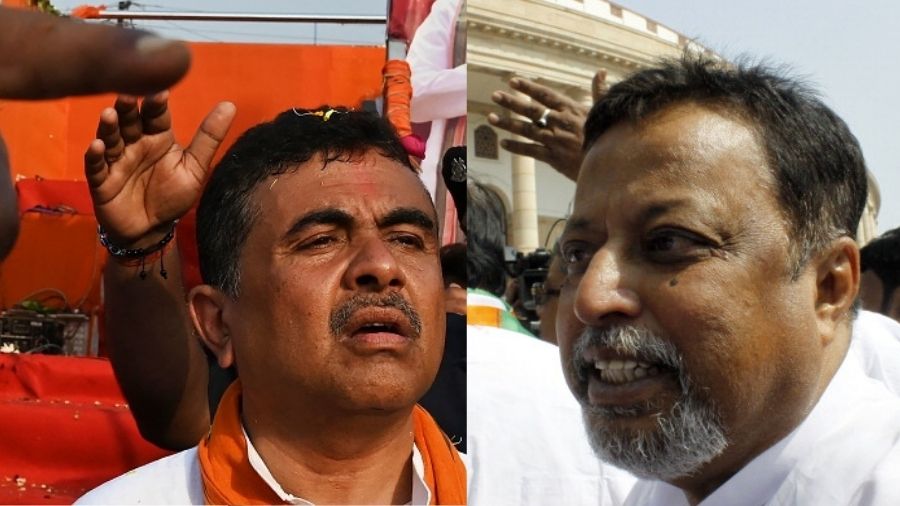 Since its inception in 1998, Trinamul Congress, year after year, has poached MLAs from other parties and dodged the anti-defection bullet.
Getty Images
Arnab Ganguly   |   Calcutta   |   Published 11.08.21, 03:18 PM

In the years between 2001 and 2005, Subrata Mukherjee held the mayor’s post in Calcutta Municipal Corporation (CMC) as a Trinamul nominee. But, in the state Assembly he signed on the register for Congress legislators kept in the room reserved for the party.

“He would walk into the room, sign the register and go elsewhere. In the Assembly he would sit with the Congress legislators, his name would be there in the list of speakers from the Congress. There was no way to disprove that he wasn’t a Congress MLA,” said a party leader of Bengal.

Since its inception in 1998, Trinamul Congress, year after year, has poached MLAs from other parties and dodged the anti-defection bullet.

This year, within two months of beginning its third term, Trinamul wrested Mukul Roy, an MLA of the only Opposition in the state Assembly, the BJP (the only non-Trinamul, non-BJP MLA in Bengal today is Naushad Siddiqui of the Indian Secular Front).

Wait, isn’t there a law that is meant to prevent MLAs from jumping from party to party? Yes, the 10th Schedule of the Constitution, referred to as the Anti-Defection Law, was passed by Parliament in 1985 and reinforced in 2002.

But in Bengal, it just doesn’t seem to work. Over the last few decades, neither the Congress nor the CPM could do anything with it to deter its MLAs from jumping ship.

In the case of Roy, the BJP has complained to the Bengal Assembly Speaker against his defection. To complicate matters, the Trinamul has named Roy head of the Public Accounts Committee (PAC), a position which by convention is held by an Opposition leader. Last month, Roy was with Mamata during her week-long tour of Delhi to meet national leaders.

Speaker Biman Banerjee held a hearing on Roy’s defection on July 30. Roy did not attend. But BJP leader Suvendu Adhikary did. The Speaker is scheduled to hear the case again on August 17. And if he finds substance in the charges, Roy will most likely be served a notice.

Adhikary, the BJP leader of the Opposition in the Assembly, shared an image and video of Roy at Mamata Banerjee’s residence from where she had delivered her virtual address to party workers for Trinamul’s annual Martyrs’ Day rally on July 21.

“On which stage can you spot the PAC chairman?” asked Adhikary.

Till it was held in public, the July 21 Martyrs’ Rally dais was the grand stage for political switchovers in Bengal as legislators and others, most of them from the Congress and a few from Left parties, would use the occasion to swear allegiance to the Trinamul flag.

But this time the BJP seems determined to press for Roy’s disqualification. Party MLA Ambika Roy has filed a PIL against Roy’s appointment as PAC chairman.

"Whenever the Speaker will call us (on the defection issue) we will appear. All documents have been submitted. The anti-defection law is not effective here. After former CPM MLA Dipali Biswas joined Trinamul, 23 hearings took place but there was no decision. We will not wait indefinitely,” said Adhikary.

Mukul Roy’s defection is one in a series of similar episodes in Bengal’s legislative politics since Trinamul Congress was formed.

After the split in the Bengal Congress in 1997 and subsequent formation of a new party, around 16 MLAs had switched sides. Two years before that, the Congress had its best showing in Assembly elections, winning 82 seats, its highest tally since losing power in 1977.

Veteran Congress leader Abdul Mannan, who was the party’s whip then, recalled he had moved the Speaker’s office seeking disqualification of four of the 16 MLAs—Sabuj Dutta, Tushar Bhattacharya, Sanjay Bakshi and Mihir Goswami. “But, nothing came of it. Some hearings took place. That’s all,” Mannan said.

This was during a time when the CPM was in power and there was never any love lost between the two. A CPM leader who is aware of the goings-on in the Assembly in the last tumultuous years of the Left rule says it was almost impossible to prove they had joined the Trinamul.

During that time, the only Congress MLA who chose to resign after joining the Trinamul was Sovandeb Chattopadhyay, who later got elected as MLA on a Trinamul ticket.

What the law states

The 10th Schedule of the Constitution states that a member of a House belonging to any political party shall be disqualified if he or she has a) voluntarily given up membership of such a political party, or b) votes or abstains from voting in such House contrary to any direction issued by the political party to which he belongs.

The onus to decide on defections lies with the Speaker, with no time limit on coming to a conclusion.

In recent memory, only two MLAs have been disqualified for defection. In 2008, the late Speaker, Halim, had signed orders to disqualify the late Somen Mitra and Sudip Bandyopadhyay from being members of the legislative Assembly. The two did not deny they had joined the Trinamul. Then Congress legislature party leader Manas Bhunia, who himself defected eight years later and did not resign till the Trinamul nominated him to the Rajya Sabha, had actively pursued the case against Mitra and Bandyopadhyay.

“Had Bhuniya not pursued the matter diligently that could not have happened,” said a Congress leader.

Another problem for the Congress was that pushing the anti-defection case against erstwhile MLAs would have meant by-elections. And that was unlikely to have brought any cheer to the grand old party in Bengal. A similar thought stopped the party from adopting a strong anti-defection stance from 2016 onwards.

“Had the Speaker pursued the cases we would have fallen short of the mark of 30 to be counted as the main Opposition party. Risking that was not worth it,” said the Congress leader.

In her first term, Mamata kept her hands off Congress legislators till she was in an alliance with the party. The first from the Congress to defect after Trinamul came to power was Krishnendu Narayan Chowdhury of Malda, who had been in and out of the party quite a few times, followed by Rejinagar’s Congress MLA Humayun Kabir. Both became ministers and fought by-elections. Chowdhury won, while Kabir lost.

Then Shantipur MLA Ajoy De resigned from the Assembly and sought re-election on a Trinamul ticket in May 2014. In the decade-old Mamata-rule in Bengal, the late legislator De remains the only politician to have resigned after quitting his parent party. “He had made it clear he wouldn’t continue as a Congress MLA after switching to the Trinamul,” recalled a Trinamul leader.

By the time Mamata ended her first term, 14 more MLAs from the Congress and the Left had joined the Trinamul, but no defection charges were brought against them.

Two months into her second term in 2016, Mamata welcomed CPM’s Dipali Biswas and Congress’ Tushar Bhattacharya into the Trinamul fold at the annual July 21 rally. For the next five years Biswas carried on business as a CPM legislator on paper, while sitting in the Treasury Benches.

“Twenty-three hearings were held. She skipped dates. We kept on piling documents on the Speaker’s table. It was an exercise in futility,” said Sujan Chakraborty, CPM central committee member and leader of the Left Front in the last Assembly.

The CPM leader wrote to the Speaker again after Biswas moved to the BJP in December 2020. By then, the Assembly term was coming to an end and a disqualification would not have done any damage either to her or to the parties she had joined.

At one point, Mannan had even approached the Supreme Court to intervene and ensure the anti-defection law was not misused. “The court cannot intervene in this matter till the Speaker gives a ruling. There is no time bound factor for the Speaker to decide. The law definitely needs a relook, but the court can’t say so,” Mannan said.

Roy’s defection, only the latest and definitely not the last, has gained significance since the Trinamul itself is pursuing a case against two of its alleged defectors, Lok Sabha MPs Sisir Adhikary and Sunil Mandal. Lok Sabha Speaker Om Birla has issued notices to both. In the ongoing Parliament session, Mandal was seen protesting with Trinamul MPs, perhaps signalling a change of heart. But, it is unclear if the Trinamul will eventually "forgive and forget" and keep him in its fold.

In case the Speaker's ruling goes in favour of Trinamul, the party would come under pressure to take action against Roy. In such a scenario, Roy, a reluctant legislator in the first place, may have to make room for someone else to contest from the Krishnagar North seat. His son, Subhrangshu, who left the BJP along with him, will be only too willing to fill in. But will Mamata agree?