The chief minister accused the Centre of bias in favour of the market, against the interests of the masses 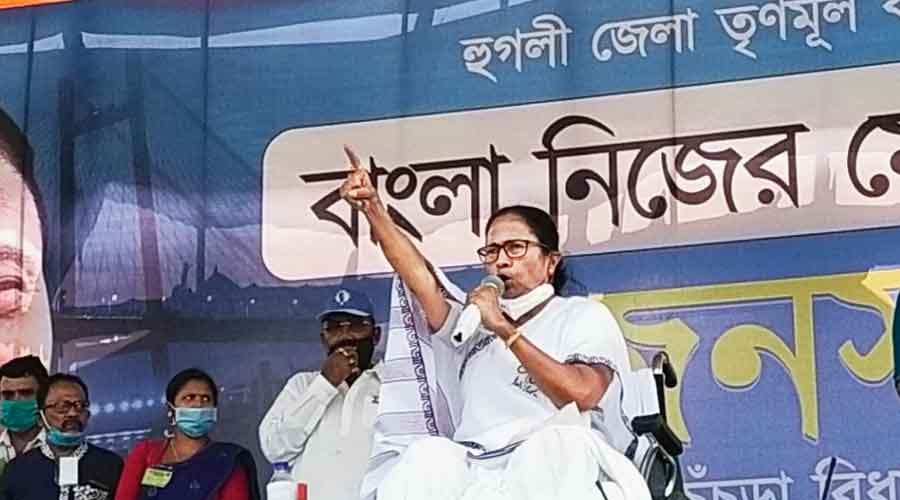 Mamata Banerjee on Thursday fired off a stern letter to Narendra Modi, terming his government’s Covid-19 vaccination strategy as “highly discriminatory” and “anti-people”.

The chief minister accused the Centre of bias in favour of the market, against the interests of the masses, and stressed the need for every Indian to get free vaccination.

Hours after the Bengal chief minister reiterated her promise of universal — for those above the age of 18 — free vaccination for all Bengal residents from May 5, three days after the Assembly election results, she has sent the letter to the Prime Minister.

“I am afraid, this policy is highly discriminatory and anti-people. Moreover, it appears that there is a bias in favour of market against the interest of common people,” wrote Mamata.

The chief minister called out the Centre over its unprecedented decision to make states buy vaccines for the mass-immunisation drive.

“In fact, never ever has any state in this country been asked to buy vaccines in any mass immunisation drive, let alone at such hugely high rates,” she added, in condemnation of the varied pricing of the vaccine, which has triggered a controversy.

Earlier in the day, at several election rallies, Mamata had said the Centre had enough money in its coffers, but was unwilling to make vaccination free for the nation.

She called out Modi and his cabinet repeatedly over not having done enough in the war against the pandemic when there was time before the second wave.

In the morning, she had tweeted a statement against pricing differentiation for the vaccines. “One nation, one party, one leader shouts BJP all the time but to save lives they can’t have one price for vaccine,” she had posted.

“Every Indian needs free vaccine, regardless of age, caste, creed, location. GoI must fix ONE price for Covid vaccine irrespective of who pays— Centre or the States,” she had added on the microblogging site.

Even in the letter, the Trinamul Congress chief brought up the differences in pricing, calling it “anti-federal”, “anti-poor” and “anti-youth”.

“First, why should the prices of vaccines be different in cases of state government? GoI gets the vaccines from manufacturers @ Rs 150 per dose, while you have fixed for us, the states, a price of Rs 400 per dose. States will have to pay 167 per cent extra over and above the rates that GoI has fixed for itself,” she wrote to Modi. “Such peculiar differentiation of rates is also unheard of in Indian history.”

The chief minister said fixing a rate of Rs 600 per dose for private hospitals was not only discriminatory but also “unhealthy”, as it could trigger unscrupulous mechanisms in the market.

Mamata underscored the grave crisis for the nation, refusing to accommodate vaccine manufacturers being allowed to prioritise business now.

“Every effort in this situation should be directed towards common good of people without any difference or discrimination,” she wrote.

“I strongly feel that every Indian should get free vaccine, regardless of age, caste, creed, location, at one price, irrespective of who pays — the Centre or the states,” she added, seeking the Centre’s urgent intervention.

The BJP, predictably, responded with yet another lavish praise of Modi, besides derision for Mamata, as she promised the universal free vaccination for Bengal from May 5.

“She seems to forget that she would be thrown out of power on May 2 (the day of counting for the Assembly election). Whatever needs to be done after that, will be done by the BJP here,” said BJP state chief spokesperson Shamik Bhattacharya.

Bhattacharya yet again accused Mamata of trying to mislead the people — going to the extent of suggesting there was no great cause for worry even at this stage and intensity of the pandemic — and of fear-mongering to ensure less people vote in the phases that remain.