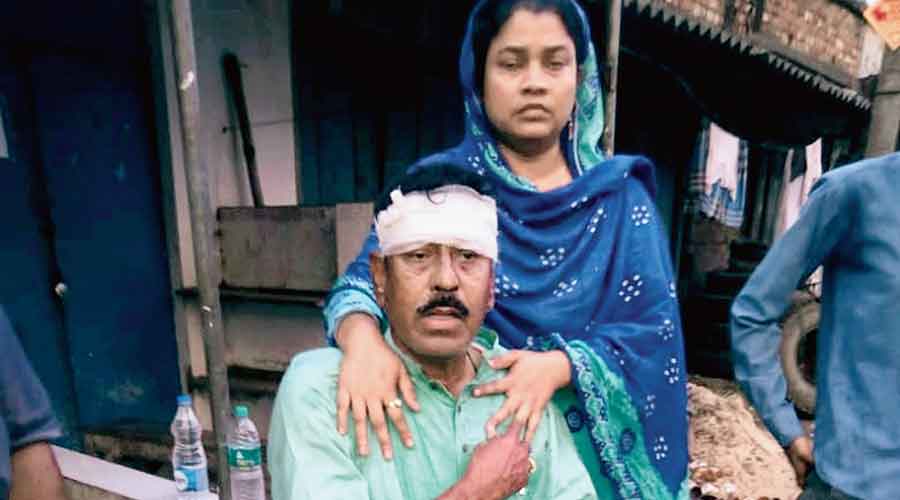 The injured Giasuddin on Wednesday evening; (right) a bus set on fire by alleged Trinamul supporters on Diamond Harbour road after the attack on the minister
Telegraph picture
Subhasish Chaudhuri   |   Calcutta   |   Published 08.04.21, 01:40 AM

Trinamul sources said the minister had suffered injuries to the head and had been admitted to a private hospital at Rajarhat. The sources said his condition was stable.

The attack on Giasuddin comes a day after six candidates, belonging to both Trinamul and the BJP, were assaulted during the third phase of the polls on Tuesday.

Police and the Trinamul sources said armed men had waylaid Giasuddin near Rajarhat More on Diamond Harbour road around 6.30pm. The attackers vandalised his car and beat up him and some of his party colleagues when he was going to attend an election meeting.

In retaliation, BJP workers were attacked by alleged Trinamul activists at a number of places like Magrahat and Usti.

Additional police forces were sent to control the situation. Para-military personnel have been engaged for area domination and to clear roads and restore normalcy.

“It was a planned attack by the BJP....The goons had planned to kill Giasuddin but his security personnel and local residents managed to free him from the clutches of the goons,” a Trinamul leader in Magrahat said.

However, the family members of the minister did not rule out the possibility of the Indian Secular Front’s involvement in the attack.

The Mathurapur BJP organising district leadership has rejected Trinamul’s charges. “The attack must be the outcome Trinamul’s infighting. We are being maligned without any proof,” a BJP leader said.

Three polling agents of the Trinamul Congress were allegedly beaten by BJP workers in Hooghly’s Khanakul late on Tuesday night. Sources said three polling agents were attacked at their homes after they had returned from booths in the Krishnanagar area of Khanakul. The trio were admitted to a hospital in Arambagh with head injuries.