Trinamul says most announcements are tweaks of their pledges, except Mamata's Universal Basic Income scheme which stands unparalleled 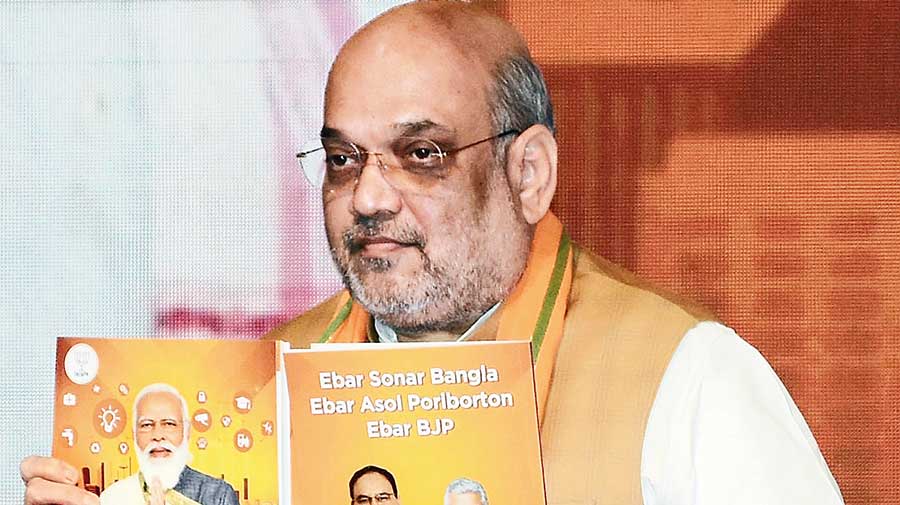 The essential ingredients of the Sonar Bangla that the BJP wants to serve up: the Citizenship Amendment Act (CAA), an infiltration net so tight that even a bird will be unable to fly in, Durga Puja celebrations without having to seek court permission, daily Ganga Aarti on the banks of the Hooghly and “tweaked” welfare schemes implemented or promised by Mamata Banerjee.

A decision to implement the CAA will be taken at the very first cabinet meeting if the BJP comes to power, says the BJP manifesto — Sankalpa Patra — released on Sunday.

“By implementing the CAA, the BJP (government) will complete the task of giving citizenship to all of them (non-Muslim refugees from neighbouring countries),” Shah said.

The Centre had passed the CAA on December 11, 2019, but the act has remained on paper as the rules have not been framed yet.

After Shah’s announcement on the CAA on Sunday, some BJP insiders wondered how the state government would implement the new citizenship act unless the rules were framed. The committee on subordinate legislation for the Rajya Sabha has extended the deadline for framing the rules till July 9, 2021.

Sources in the BJP said the mention of the CAA in the manifesto was important as the party was keen to retain its base among the Hindu refugee community of the Matuas, who have a key role in deciding the outcome in 25-odd seats.

“Through the Chief Minister Refugee Welfare scheme, every refugee family will be transferred Rs 1,000 through DBT (direct benefit transfer) for five years so that they can rehabilitate themselves with honour,” Shah said, adding that the new government would also provide a monthly pension of Rs 3,000 to Matua dalapatis or team leaders.

‘Not a bird will fly in’

Shah juxtaposed the CAA announcement with another key polarisation pitch -- infiltration. “We have decided that not only human beings, even a bird will not be able to fly in from beyond the border, such will be the security arrangements at the border,” Shah said.

The polarisation objective was clear in the manifesto with Shah saying that no one would have to “take permission from the courts” to organise Durga Puja or Saraswati Puja under BJP rule.

“We will enhance the liveliness of Calcutta’s Durga Puja by putting it on the international map. We will ensure tourists from all parts of the world and make sure that no one has to seek permission from the courts to celebrate Durga Puja,” Shah said.

This year, the high court had suggested restrictions because of Covid. The norms — and the willingness by the people to follow them — were widely credited with averting a surge in the Covid cases during the festival season.

Since 2017, the BJP has tried to establish that Mamata Banerjee is against Durga Puja by highlighting a 2017 government order and alleging she had stopped the immersion of Durga idols to make way for Muharram processions. The temporary government order was issued to avoid chaos, and Durga Pujas were never banned in the state.

Shah said a BJP government in Bengal would establish a purohit welfare board and provide the priests with an honorarium. Kirtankars — artistes who perform devotional songs — aged over 60 will be given a monthly pension of Rs 3,000.

Shah said a BJP government would develop an international ghat on the Hooghly’s banks where Ganga Aarti will take place every day. He added that Rs 100 crore would be spent to renovate and repair Hindu temples across the state.

“Polarisation is their politics. There is almost no economic programme, only polarisation. They have announced an honorarium for priests but our government already offers Rs 1,000 a month to them. They are trying to present it in such a way that polarisation takes place,” said Trinamul spokesperson and MP Saugata Roy.

The promise stands out at a time the unemployment rate in the country has touched a 45-year high under the Narendra Modi government.

Shah said that 33 per cent of government jobs would be reserved for women. All women will be offered free education from kindergarten to postgraduate level. Women will also be eligible for free rides on government transport.

The widow pension will be increased from Rs 1,000 a month to Rs 3,000 a month. Under a scheme called Balika Alo, girls from marginalised segments will be provided a stipend for their education.

The BJP manifesto says that if voted to power, the party’s government will introduce Annapurna Canteens across the state to provide meals thrice a day at Rs 5 each. The promise has echoes of the Mamata government’s Maa Canteens that provide a plate of rice and egg curry for Rs 5 once a day.

Trinamul has said that most of these announcements are tweaks of the party’s pledges. “The BJP is following our lead and imitating us. Most of the programmes they announced are already in implementation in Bengal,” Roy said.

One key difference does exist between the BJP and Trinamul manifestos. Mamata has promised a Universal Basic Income scheme for the women heads of 1.6 crore families.

“It is true that they have followed us in their manifesto. But the UBI scheme empowers the women of Bengal…. Such an initiative doesn’t even come to their minds. They don’t have that sensitivity,” said Trinamul spokesperson Bratya Basu.