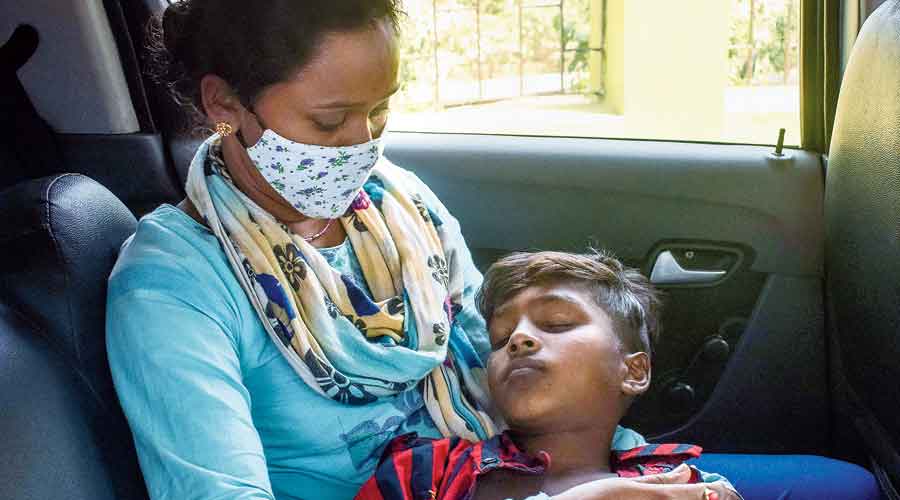 A relative takes Mahadev Sharma to hospital after he was thrashed by the BJP worker on Monday
File picture
Subhasish Chaudhuri   |   Phulia (Nadia)   |   Published 21.04.21, 01:11 AM

The West Bengal Commission for Protection of Child Rights has taken suo motu cognisance of a BJP worker’s assault on a 10-year-old boy for refusal to chant “Jai Shri Ram” and asked Ranaghat district police to probe the incident.

Mahadev Sharma was admitted to the Ranaghat subdivisional hospital with multiple injuries. The boy was beaten up by Mahadeb Pramanik when the former was passing by a tea stall run by the BJP worker at Phuliapara near Santipur in Nadia district.

The commission requested the Nadia district magistrate to ensure best possible medical treatment to the boy.

At the same time, it directed the chief of the Ranaghat police district to conduct a probe and submit the report within three days.

In a statement, the commission said on Tuesday: “It is a clear case of severe violation to child rights which attracts the provisions of Juvenile Justice (Care and Protection of Children) Act, 2015 as well as Indian Penal Code and United Nations Convention of the Rights of the Child (UNCRC).”

The children’s rights body has also requested the Bengal chief electoral officer to conduct a probe on behalf of the Election Commission of India, take appropriate action and file a report.

Nadia district child protection officer Anindya Das on Tuesday called on the boy at the Ranaghat hospital and spoke to his father. “The boy’s condition is stable. But he is traumatised. We have ensured all required treatment for him. The boy narrated the incident to me and showed me bruises on the body,” said Das.

Santipur police started a case against Pramanik. A specific complaint was lodged against him by the child’s father, Shymanchand Sharma. However, the accused remained “absconding”.

The Nadia BJP leadership preferred to disassociate itself from the incident to avoid embarrassment. “Mahadeb is not a BJP worker,” a district leader said on Tuesday.