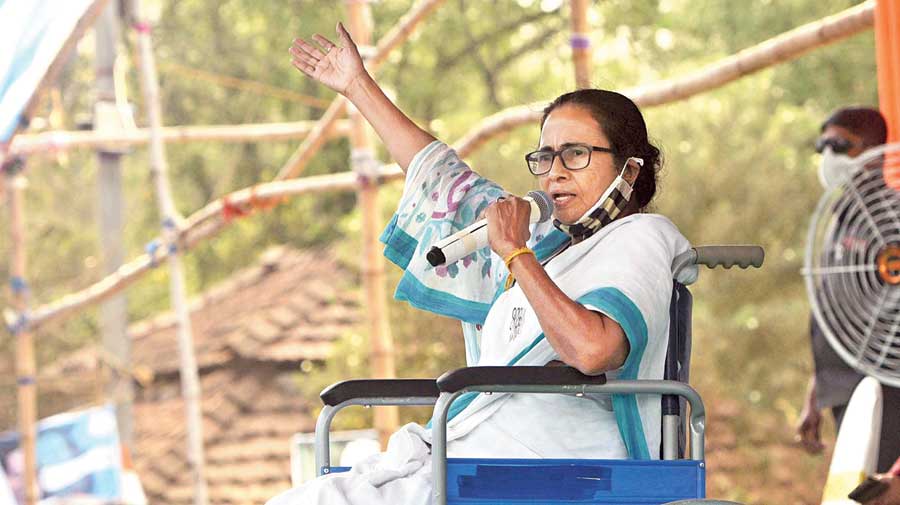 The ‘outsider’ tag has clung to the BJP this election season in Bengal, with Mamata Banerjee making it a poll plank and alleging that the party was bringing in leaders to manipulate the polls. The BJP has parachuted 18 leaders to Bengal to ‘conduct’ the Assembly elections for the party and take complete administrative control over its state unit. The Telegraph introduces the 18 lesser-known ‘outsiders’ — who came in two batches of 5 and 13.

Phase I: Give me five

Five leaders arrived in Bengal last November. Each had been put in charge of an organisational zone of the party. They toured their respective zones for 3-4 days and spoke to local leaders and workers before returning to Delhi to report to Amit Shah and J.P. Nadda. On the basis of their findings, the BJP decided on its strategy for Bengal.

Profile: Deodhar, who hails from Maharashtra, is a former RSS pracharak. He was Narendra Modi’s campaign manager in Varanasi in 2014. Deodhar was instrumental in helping the BJP assume power in Tripura, but later fell out with chief minister Biplab Deb.

Role in Bengal: In-charge of the party’s Howrah-Hooghly-Midnapore organisational zone.

Profile: Tawde, from Maharashtra, had served as minister in the Devendra Fadnavis government. He handled the higher and technical education, sports and cultural affairs and Marathi language portfolios. Denied a ticket in 2019, Tawde rebelled against Fadnavis. Earlier, a row had erupted over his educational qualification as he had claimed to be an engineering graduate from a college that did not allegedly have affiliation.

Role in Bengal: In-charge of the Nabadwip zone.

Designation: National secretary and MP from Kausambhi, UP.

Profile: Sonkar was born in Sadiyapur, Allahabad. He is chairperson of the parliamentary committee on ethics. Sonkar’s election affidavit states he has four cases pending against him, where he has been charged with promoting enmity between different groups on grounds of religion, race, place of birth, residence and language, and bribery and illegal payments during elections.

Role in Bengal: In-charge of the Durgapur zone.

Designation: National secretary and MP from Basti, UP.

Profile: Born in Basti district, Dwivedi once led BJP youth wing Yuva Morcha’s UP unit. His election affidavit states there are five pending cases against him, where he has been accused of rioting, wrongful restraint and confinement, intentional assault to provoke breach of peace, obstruction of public way, and assault on a public servant. Dwivedi had infamously observed that Congress leaders Priyanka Gandhi Vadra wore jeans in Delhi but sported vermilion and sari in UP.

Role in Bengal: In-charge of the north Bengal zone.

Profile: Gautam was born in Delhi and was elected from Haryana to the Upper House. He was associated with the BJP’s Scheduled Caste wing for long, and also with the Akhil Bharatiya Vidyarthi Parishad (ABVP). The Delhi University passout had unsuccessfully contested the Delhi Municipal Corporation and Delhi Assembly polls.

Role in Bengal: In-charge of the Calcutta zone.

Five general secretaries from various states have been posted in Bengal since December to man the organisational zones. In addition, eight leaders, including ministers, have been air-dropped to hold rallies and other outreach programmes.

Profile: Born in Rajasthan, Bansal was associated with the RSS and has been the national joint organising secretary of the ABVP. A close associate of Amit Shah, Bansal is credited with the BJP’s stellar performances in UP in the 2014 parliamentary polls and the 2017 Assembly elections.

Role in Bengal: Looking after the Burdwan zone.

Profile: Dalsaniya acts as a bridge between the RSS and the BJP. Considered close to both Narendra Modi and Amit Shah, Dalsaniya’s name had done the rounds for the Gujarat chief minister’s post after the resignation of Anandiben Patel in 2016.

Role in Bengal: In-charge of the Nabadwip zone.

Profile: A resident of Deoria in UP, Ratnakar was an RSS pracharak and an ABVP activist.

Profile: An RSS pracharak, Rana enjoys considerable influence in the Himachal government. Jwalamukhi MLA Ramesh Dhawala had accused him of interfering in his constituency’s work.

Designation: MP from Muzaffarnagar, UP, Union minister of state for animal husbandry, dairying and fisheries.

Profile: An accused in the 2013 Muzaffarnagar riots. Although he was already in custody during the riots as a precautionary measure, he had taken part in the September 2013 mahapanchayat that is often held responsible for the riots.

Profile: Born in Rajasthan’s Sikar district, Shekhawat was an ABVP activist. In his 2019 election affidavit, Shekhawat has declared that he is an accused under IPC Section 182, which charges him with spreading false information with an intent to cause a public servant to use his lawful force to the injury of another person. A Rajasthan court had ordered a probe into Shekhawat and his family’s purported complicity in a deposit collection scam. He is among the leaders accused by Congress chief minister Ashok Gehlot of trying to topple his government.

Profile: Born in Bihar’s Hajipur, he has represented the local Assembly constituency multiple times. In 2017, Rai had remarked that any finger or hand raised at Modi should be “broken or chopped off”. He later expressed regret. Charges against Rai include extortion, theft, promoting enmity between two groups, statements conducting public mischief, and assaulting public servants.

Profile: Born in Jamshedpur, Munda has been chief minister of Jharkhand in three phases. He was a part of the JMM’s Jharkhand movement and joined the BJP later. Munda had stated in his 2019 poll affidavit that a criminal case was pending against him.

Profile: Born in Gwalior, Mishra had contested the 2009 Lok Sabha polls and lost to Jyotiraditya Scindia. In June 2013, Mishra was disqualified by the Election Commission for three years on the charges of filing wrong election expenditure accounts in the 2008 Assembly polls and using paid news in his campaign. The order was later set aside. He had refused to wear a mask at public events during the pandemic and had accused the web serial Tandav of hurting religious sentiments.

Profile: Born at Sirathu in Uttar Pradesh, he was appointed the head of the state BJP in 2016 with an eye on Yadav OBC votes. He was an active member of the RSS and had been arrested during the Ram Janmabhoomi and Gau Raksha movements.

Profile: Patel was born in Narsinghpur, Madhya Pradesh. In June 2019, his son Prabal, nephew Monu and five others were arrested in Madhya Pradesh for attempted murder. Patel is a strong advocate of banning cow slaughter.

Profile: Born in a small village in Bhavnagar district of Gujarat, Mandavaiya was a state executive member of the Gujarat unit of the ABVP. He has also represented the BJP in the Gujarat Assembly.