The actress was heard saying 'I will lose my job, so will you' when she saw him advancing with his cell phone to click a picture with her 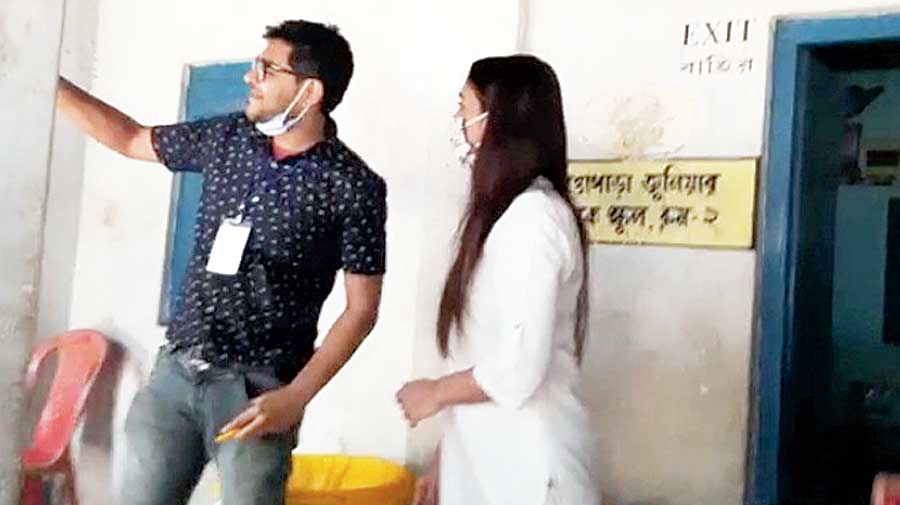 A polling officer was relieved of his duties after he clicked a selfie with a “celebrity voter”, actress-turned-Trinamul MP Mimi Chakraborty here on Saturday.

Mimi, the Jadavpur MP and a voter of Jalpaiguri, reached the booth to cast her vote around 1pm.

The actress was heard saying “Amaro chakri jabe, apnaro, (I will lose my job, so will you),” when she saw M. Chakraborty, the third polling officer of Pandapara Nimna Buniadi Vidyalaya (booth 17/155), advancing with his cell phone with the intention to click a picture with her.

The MP’s alert, however, did not deter the government employee. He initially stepped back but while Mimi was walking out of the booth after casting vote, Chakraborty left his desk again and this time took a selfie with the actress. Mimi then got into her car and left.

Moumita Godara Basu, Jalpaiguri DM, said: “What the polling officer did is a violation of government rules. As we came to know about it, we relieved him from his duties and have deputed another person in his place. We will take administrative steps against him.”

The incident has led to mixed reactions in the district.

“Mimi Chakraborty is a popular actress. It seems that the polling personnel could not control his emotions and clicked a photo with her. We don’t feel it is a major offence,” defended Saikat Chatterjee, the Jalpaiguri district Trinamul youth president.

“He might have had plans to surprise his family with the selfie. But his move has posed a problem for him. We have seen celebrities voting during the elections but have never heard of such an act by polling personnel. The administration, we believe, has taken an apt decision,” said Palen Ghosh, the Jalpaiguri district president of Bharatiya Janata Yuva Morcha.

A senior government official pointed out that during the training, each polling team member is elaborately taught about the do’s and don’ts. “Even then, this person could not check himself. It is a complete violation of rules, particularly because the celebrity is also an elected representative of a political party,” he said.

Both Mimi and the polling officer could not be contacted.