Bengal Polls 2021: PM Modi to hold rallies on a single day instead of two

Efforts are being made to restrict the turnout between 500 and 1,000 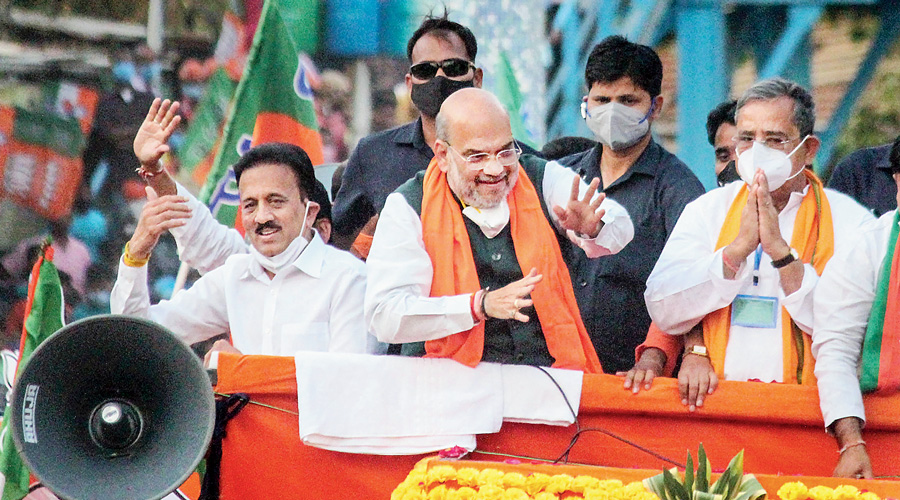 The picture shows Amit Shah, whose supporters call him the modern Chanakya, during a road show in South Dinajpur, Bengal, on Monday. Yes, the white object hanging below the minister’s chin is a mask. On Friday, the Election Commission had said it had taken a “serious view against repeated violations” of the Covid protocol by star campaigners and political leaders who “expose themselves as well as the public to the danger of infection”.
PTI photo
Arkamoy Datta Majumdar, Avijit Sinha   |   Calcutta   |   Published 20.04.21, 03:40 AM

The BJP has so far stuck to Prime Minister Narendra Modi’s four-rally plan for the remaining phases in Bengal but indicated that the events would be held on a single day instead of two and efforts would be made to restrict the turnout to between 500 and 1,000.

The tinkering was disclosed after chief minister Mamata Banerjee announced her decision to limit the number of her rallies in Calcutta to one and shorten the duration of her speeches.

Mamata renewed a fervent appeal to the Election Commission of India to club the remaining three phases of the polls.

“The Election Commission should take note of the situation and conduct elections in these remaining phases in one or at least two phases. We had raised the demand earlier…. But it seems that as the Prime Minister is scheduled to campaign here till April 23, they didn’t take the decision,” Mamata told a North Dinajpur rally.

“I will not hold any major rallies or programmes in Calcutta except the one in north Calcutta on April 26.… Besides, I have curtailed the duration of my election meetings. Instead of addressing the meetings for 20 to 30 minutes, I’m speaking for 10 to 15 minutes at best, considering the situation,” Mamata told a news conference in Malda.

“I cannot comment on what other political parties would do but we will definitely act rationally during the election campaign, taking into consideration the prevailing situation.”

The CPM had been the first party to announce that it would not hold large rallies and would focus on door-to-door and virtual campaigns. The party has also booked slots with television and radio channels to reach out to voters.

Congress MP Rahul Gandhi declared on Sunday that he was cancelling all his rallies in Bengal.

Modi was supposed to address two rallies each in Behrampore and Malda on April 22 and in Suri and south Calcutta on April 24. He will now address all the four rallies on April 23, a source said.

“The Prime Minister’s Office has asked us to take necessary precautions during his public meetings and ensure strict adherence to coronavirus protocols. This is why we are clubbing the four rallies together,” said a state BJP office-bearer who is the coordinator for Modi’s rallies.

On Monday night, the BJP central office announced that only 500 to 1,000 people would be asked to be physically present at these rallies. Others will be “advised and encouraged” to stay at home and watch the meetings on their television sets or on social media, the source said. Besides, the number of giant screens will be increased.

The Trinamul ecosystem dropped a hint about the campaign plan on Monday, with several leaders comparing the BJP and Trinamul responses to the second wave of the pandemic.

On Monday, Trinamul MP Mahua Moitra posted a tweet calling out both the ECI and the BJP for not invoking the Epidemic Act amid the coronavirus crisis.

“Why is @ECISVEEP (ECI) hell bent on killing us all? Why can the Epidemic Act not be invoked & voting clubbed together? How is BJP candidate’s right to campaign superior to voter’s right to life? This is insane @ECISVEEP,” she tweeted.

Why is @ECISVEEP hell bent on killing us all? Why can the Epidemic Act not be invoked & voting clubbed together?

How is @BJP candidate’s right to campaign superior to voters’ right to life?

Senior Trinamul leader Purnendu Basu held a news conference in the morning to explain how the lives of the people of Bengal were more important to Trinamul.

Later in the day, the chief minister repeated her allegation and accused the saffron party of spreading the infection by bringing “outsiders” into the state.

“They have brought in thousands of hired miscreants from other states to Bengal…. These people are spreading Covid,” Mamata said.