In Birbhum, the BJP lodged a complaint against TMC leader Sibnath Hazra, accusing him of having campaigned despite his wife and daughter being infected 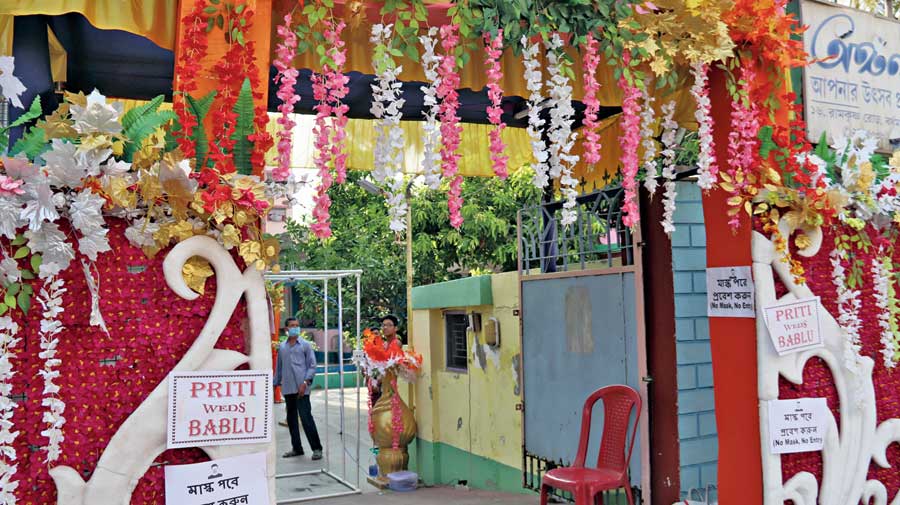 Political parties in parts of Bengal have started lodging complaints against rivals with Covid-positive kin in a bid to keep them off poll activities ahead of the final phase.

In Birbhum, the BJP lodged a complaint against Trinamul leader Sibnath Hazra, accusing him of having participated in campaigns despite his wife and daughter being infected with the virus.

Trinamul lodged a complaint against BJP’s Sainthia candidate Piya Saha, asking to stop her campaign as her husband tested positive.

The block development officer and assistant returning officer of Sainthia Assembly constituency, Swati Dutta Mukherjee, sent a notice to Trinamul leader Hazra, asking him to get tested and stay isolated till his report arrives.

Hazra accused the administration of bias. He also lodged a complaint with Dutta Mukherjee, saying she did not send a similar letter to Saha.

BDO Dutta Mukherjee said she had sent a similar letter to the BJP candidate as well.

Saha said she has been self-isolating for two days and was not planning to go out during polling on Thursday. She added she was yet to get tested in the absence of symptoms.

Amid an exponential surge in the second wave of the pandemic, many south Bengal districts have started cracking down on those flouting safety norms, with hundreds of cases against political parties and organisers of social events like weddings and individuals.

In Murshidabad and Birbhum, where elections are due on Thursday, police have initiated cases against around a hundred political leaders for crowds in campaigns.

Nagendra Nath Tripathi, Birbhum’s poll panel-appointed police chief, said around 60 cases were initiated in the district, most of them against political parties.

“We have started cases under the Disaster Management Act against organisers of political rallies. Cases against individuals have also been started,” said Tripathi.

In Hooghly, police filed around 160 cases, including against the organiser of a wedding ceremony, for violating Covid-19 norms. “We have already started a case against a wedding gathering in Serampore…,” said Gaurav Sharma, the Chandernagore police commissioner.

In East Midnapore, 326 persons were arrested in the past 24 hours for violating Covid-19 safety norms such as not wearing masks.