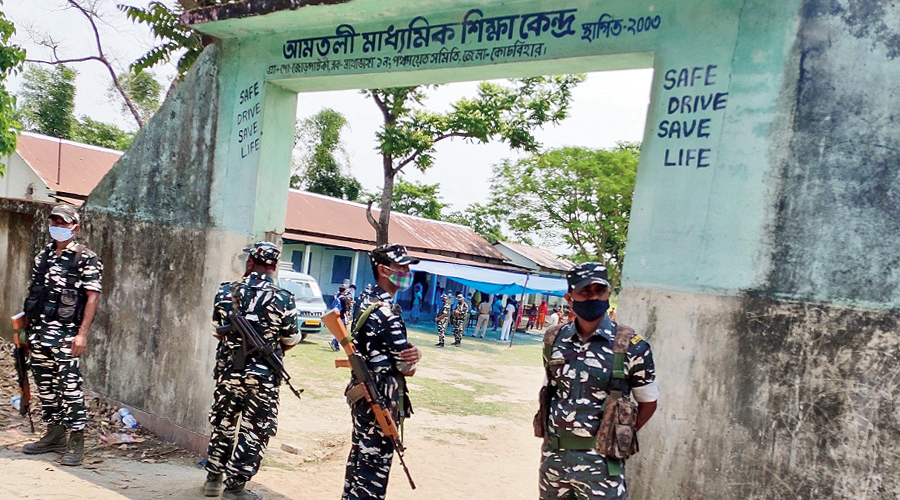 Bengal governor Jagdeep Dhankhar’s decision to use a BSF chopper to visit Sitalkuchi on Thursday “… to connect with sufferers” has raised questions in the state’s power corridors on whether he should spend taxpayers’ money to assess law and order in a Cooch Behar pocket when normality has been restored.

Four youths lost their lives in a CISF firing outside a polling booth in the Sitalkuchi Assembly segment on April 10, triggering uproar across the state.

The BSF in Bengal has two advanced light helicopters, currently stationed in Agartala (Tripura) and Guwahati (Assam). Based on orders the BSF’s eastern command gets from its headquarters, one will be brought to Calcutta to fly Dhankhar to Sitalkuchi, sources said.

“Whether a chopper can fly a VIP or not for an emergency or any other situation is decided solely by the Union home ministry (under Amit Shah),” said a senior BSF staff officer from Delhi.

After tweeting on Tuesday about his plans to visit Sitalkuchi, which received criticism from Trinamul and praise from the BJP, Dhankhar’s Twitter handle on Wednesday posted more details.

“West Bengal Governor will reach Coochbehar by BSF Helicopter at 11 am on May 13 to visit post poll violence affected areas @MamataOfficial. Governor will visit places at •Mathabhanga •Sitalkuchi •Sitai and •Dinhata. Governor will meet people & media at CB Circuit House,” read a tweet, adding Friday would be spent on visits to (BJP-ruled) Assam’s Ranpagli and Srirampur.

Governor will visit places at
•Mathabhanga
•Sitalkuchi
•Sikai and
•Dinhata

The developments around Dhankhar’s Sitalkuchi visit, sources said, made it clear that it was planned in Delhi to discredit the Mamata government. That’s why unlike in the past, Dhankhar didn’t ask for a chopper from the state government but got it from the BSF under the home ministry.

Many senior officials in the state’s home department pointed out the alacrity with which the home ministry accorded permission to the BSF to fly Dhankhar to Sitalkuchi stood in contrast to the apparent lethargy of six CISF personnel to turn up for questioning over the Sitalkuchi firing.

In booth 126/5 of Jorpatki village in Sitalkuchi, the CISF, under the Election Commission, gunned down four villagers on April 10. Several BJP leaders had harped on the religious identity of victims and promised “more Sitalkuchis”.

Mamata called it “genocide”, and it became a key inflection point in the Bengal polls. The newly re-elected Trinamul government formed a special investigation team  under the CID to probe the incident, which sent notices to six CISF personnel to come for questioning on Tuesday. None did.

A senior IPS officer of the CID said: “We want to know from these CISF personnel what happened outside the booth that they had to open fire and why victims were shot on the upper part of their bodies.”

In the evening, Mamata told Dhankhar in her letter that his travel plans violate long-standing protocols followed by his predecessors, and of alleged direct communication with state government officials and dictating them, despite her previous requests to him against doing so.

Dhankhar responded with a letter, which he posted on Twitter, in which he argued that he was following constitutional provisions.