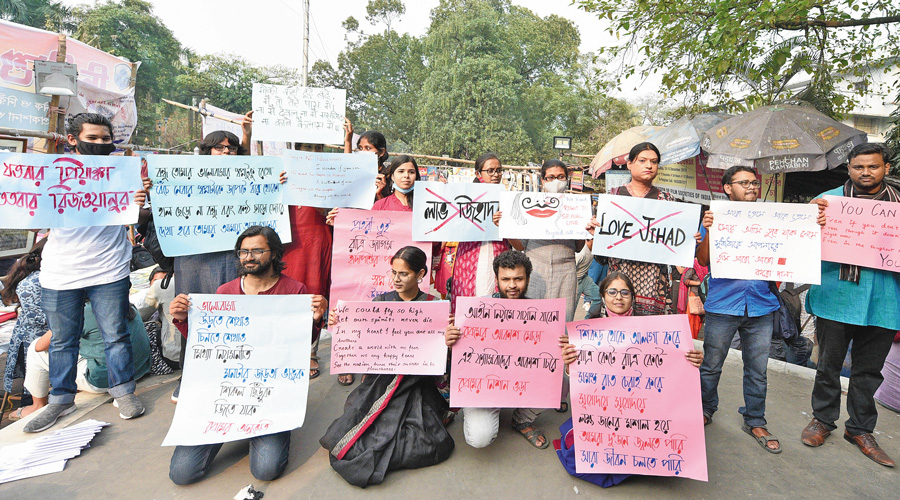 Senior student activists in Delhi’s universities often cite Bengal’s example to juniors when faced with police action or violent clashes with rivals, highlighting their eastern peers’ long tradition of standing up to authority and injustice even in the face of odds.

Some of them now believe that the roles may be reversed if the BJP wrests power in Bengal. JNU and Jamia Millia Islamia may offer an insight on what lies ahead if a government and its unofficial henchmen decide to launch onslaughts on centres of higher education.

These two universities in Delhi have been in the spotlight in connection with protests against government policies on Kashmir and citizenship, and against administrative measures that have struck at dissent and diversity — as well as for facing police and mob backlashes to such resistance.

Students and teachers at these institutions described to The Telegraph how they had negotiated the minefield of public activism while being attacked by the government and maligned by the media and the Right-wing ecosystem.

This, they said, was the sort of pressure that a BJP government at Nabanna could exert on student activists in Bengal, where they said campuses like Jadavpur University can even now host free discussions on topics like Kashmir or Hindutva that are taboo in Delhi.

Kanhaiya Kumar was JNU students’ union president in 2016 when he was arrested with two other students on sedition charges for their presence at an event where slogans for Kashmir’s independence were allegedly chanted.

Now a CPI national council member, Kanhaiya told this newspaper about the lessons he had picked up from the movement for free speech that the 2016 arrests had launched and in which he participated after his release.

He had learnt that student activists cannot divorce themselves from the reality of the society around them, and must be able to publicise their point of view independently of mainstream media.

“Anyone who values free speech, multiculturalism and debate must realise they stand to lose all this if the BJP wins. Who the police in your state reports to makes a huge difference in the matter of how repression can be aggravated,” he said.

“Student activists must be able to dilute the boundary of a university and connect with the local people — at businesses like tea shops or booksellers that exist because of a university. We also need to engage with the Right-wing paradigm of nationalism, Hindutva and the armed forces and reconstruct the discourse with a new understanding.”

He added: “Ignoring the discourse of our opponents or believing that students alone can resist goons works against us. Traditional activists also need to understand the dynamics of the digital media and create their own tools for communication, for we cannot depend on the mainstream media for fairness.”

Kanhaiya said JNU was able to protect itself better against mob violence because it is an entirely residential, walled campus — an advantage that most student activists elsewhere do not enjoy.

Ayesha Kidwai had become the JNU teachers’ association president in 2016 and spearheaded the movement by teachers and students against seat cuts.

“The unity of teachers, students and (other varsity) employees is important.... Differences exist in every university and governments exacerbate these by patronising one group to finish off the conversation. Be prepared for violence, disappointment and division. There should be no violence initiated from your side,” was her advice.

Delhi police had gone on the rampage at Jamia on December 15, 2019, after buses were burnt in the neighbourhood during a rally against the Citizenship Amendment Act. However, the movement against the new citizenship matrix continued to thrive on the campus and at nearby Shaheen Bagh, inspiring similar protests across India.

Akhtarista Ansari was then a final-year BA sociology student and vice-president of the campus unit of the CPIML Liberation’s All India Students Association. She became one of the faces of the agitation after photos of her chanting slogans and protecting a student from being beaten by the police appeared in the media.

Now an MA student at JNU, she told this newspaper that asserting one’s identity on the side of the oppressed was a legitimate and effective way of standing up to repression.

“One may not be religious, but when a minority institution is specifically targeted and its students attacked and abused with religious slurs, we need to assert our identity,” she said.

“As a Muslim, when you protest against the government or the Sangh parivar, you are asked to go to Pakistan. We heard these slurs while being hit by the cops. Being vocal against targeted communal violence is the first step.”

She added: “Jamia doesn’t have a students’ union, perhaps because the powers that be do not want an outspoken leadership of Muslims. And that’s why it was all the more important for us to do our duty as a privileged class that has received higher education and speak out against injustice.”

A student leader who was active during the 2016 JNU movement played down the possibility of Delhi campuses holding too many lessons for Bengal’s students, saying the protests in the capital were overhyped.

“It’s naive optimism to think that students are the epicentre of change. Our impact was overestimated,” said the former student who now works as a researcher elsewhere and did not want to be named.

However, the former JNU student said Bengal might become the “new epicentre of the student movement” if the state’s students have to face a more hostile government than the ones they have experienced so far.

“Bengal’s campuses are unlikely to give in without a fight,” the former student said.

Bikramaditya Choudhary, who was the JNU teachers’ association secretary during the 2016 arrests, said the defence of academic freedom cannot be an isolated one.

“The problem is not with the university per se but (with the authorities’ attitude towards) the larger democratic principles such as the functioning of institutions and discussions, and (their tendency to take) every word of criticism as a personal insult,” he said.

“A fight for the freedom of speech is not just a fight for one university but reflects respect for every voice across the country. JNU did not speak out at the volume required when school education was destroyed (with thousands of state government schools closed down across the country over the past decade or so). When the assault on higher education came, it (JNU) woke up.”

Majid Jamil, president of the teachers’ association at Jamia, said that good relations with the university administration and not being linked to any political party had helped the teachers take up the cause of the brutalised students more effectively.

“But today an atmosphere exists where we feel the presence of the Sangh parivar even within Jamia. It’s getting harder to get approvals (within the teachers’ body) even to express solidarity with the farmers’ movement,” he said.