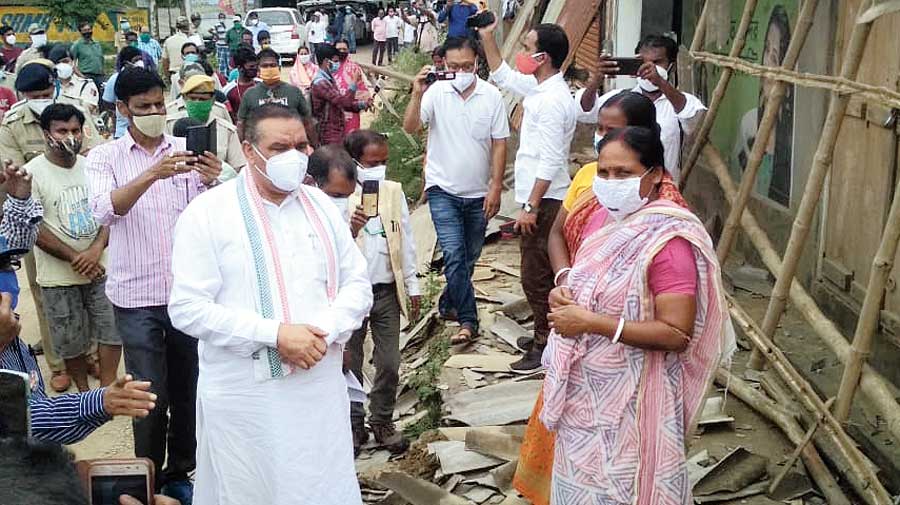 Members of the National Commission for Scheduled Castes meet alleged victims of the violence in Burdwan on Thursday.
Munshi Muklesur Rahaman
Pranesh Sarkar   |   Calcutta   |   Published 14.05.21, 01:59 AM

A team of the National Commission for Scheduled Castes on Thursday reached Bengal on a two-day tour to visit areas hit by post-poll violence amid stiff resistance from the Bengal government.

The two-member team led by its chairperson Vijay Sampla visited Jamalpur and areas close to Burdwan town in East Burdwan district on Thursday and met family members of some Dalit BJP workers who were allegedly victims of the violence.

The duo are scheduled to visit some “trouble-torn” areas of North 24-Parganas on Friday, sources said.

Although the team has sought a meeting with the chief secretary and the director general of police, it was still not clear whether the meeting would be held on Friday.

“The state government has already opposed the visit by sending at least two letters saying there had been no post-poll violence since May 8 and also citing prevailing Covid-19 situation in the state. Despite the opposition, the team is visiting some areas. Now, it is still not clear whether top officials would meet the team,” a source said.

The sources said when the commission had sent a letter to the government about its decision to visit Bengal, chief secretary Alapan Bandyopadhyay wrote two letters on May 11, requesting the body to cancel the tour given the grim Covid situation in the state.

“The NCSC team was informed that Calcutta High Court also suggested that if there was any complaint of atrocities, the same should be forwarded to the DGP for proper action. The NCSC was requested to forward the complaints, if any, to the DGP, instead of visiting the areas in two districts,” said a government official.

But the commission made it clear that it would continue its visit as it had “constitutional obligations”.

“The NCSC told the state that the commission was receiving complaints about atrocities on Dalits even if the state claimed there was no violence after May 8. And the team’s visit is to meet the responsibilities given through the Constitution,” said a source.

According to a source in the NCSC, it is the mandate of the commission to conduct spot visits if there are cases

of violence against Dalits anywhere in the country and set up an inquiry, seek reports and even summon state government officials.

“I don’t know what would happen if the state does not cooperate with the commission or stops the team from visiting three spots the commission has identified as it has never faced a situation like this,” said a source.

The sources also said the team would soon submit a report after completing its visit.

A section of the officials said the Centre was sending a number of teams to the state citing atrocities on a cross-section of people after the polls.

“The Union home ministry had first sent a team and then representatives of the National Women’s Commission arrived. We heard a team of National Child Rights Commission would visit the state soon,” said a senior official.