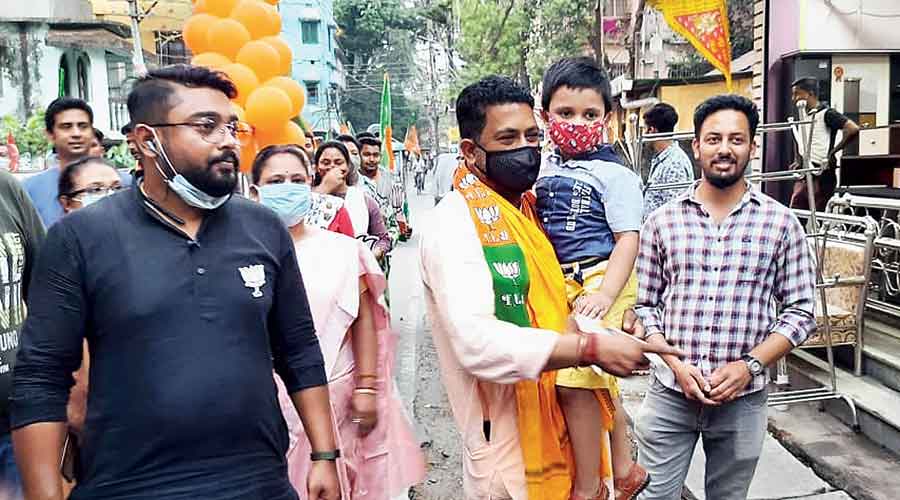 Shankar Ghosh has a tattoo of Che Guevara on his arm but makes a case for chanting Jai Shri Ram, ensconced in the company of BJP workers with tilak on their foreheads and saffron scarves around their necks.

On the other end of the arterial Hill Cart Road in Siliguri, his mentor turned adversary, CPM veteran and sitting local MLA Asok Bhattacharya eases into a chair on the ground floor of the four-storey party office on a sultry April afternoon last week, making phone calls to comrades to finalise his campaign plans for the evening.

Three-four youths in an adjacent room are hunched over computers while two middle-aged men wait in the corridor to accompany Bhattacharya on campaign trail.

“I have opted for door-to-door campaigns in some areas,” Bhattacharya, former Siliguri mayor and minister, tells this correspondent, ambling along the corridor after some time. Siliguri votes this Saturday.

Cut to the second floor of Joymani Bhavan, a commercial complex around 200 metres from the CPM office. Ghosh, once an aide of Bhatacharya who switched to the BJP from the CPM and was promptly made the Siliguri candidate for the Assembly polls, emerges from a buzzing room at one corner of a large hall.

Around 100 people, some of whom have turned up at the office to formally join the BJP, are patiently waiting for instructions from their leaders.

The moment Ghosh comes out of the room, some of them surround him, seeking his attention while the others discuss among themselves their leader’s campaign roster and the rallies of Prime Minister Narendra Modi and Union home minister Amit Shah.

“So many things happening at the same time…. We have a host of programmes lined up,” says Ghosh, whose phone keeps ringing incessantly.

Unlike the rest of Bengal, where the electoral battle is between the BJP and the Trinamul Congress, the contest in Siliguri — the biggest trade hub in the state after Calcutta and the most prestigious Assembly seat in north Bengal — appears to be centred around the CPM and the BJP. 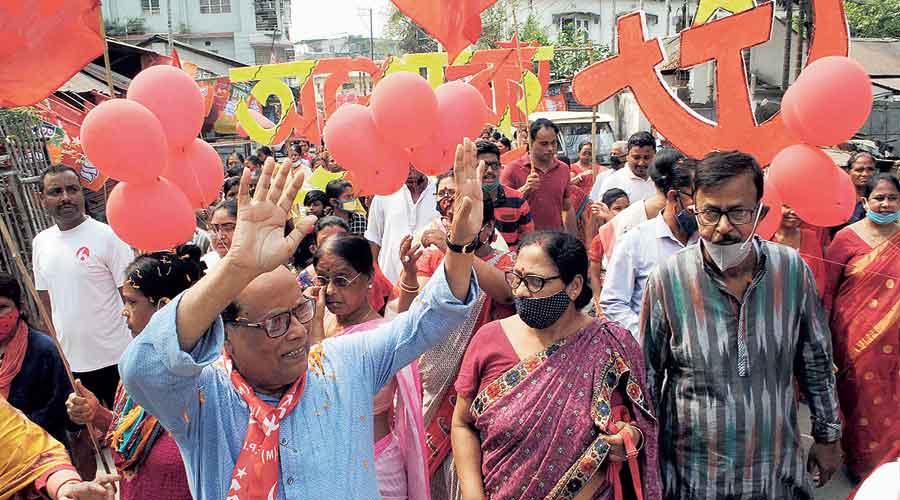 But Trinamul nominee Om Prakash Mishra cannot be written off by any stretch of the imagination.

“The BJP has managed to create a hype by spending a lot of money…. I have served the people of Siliguri as an MLA five times. I have also served them as the mayor. I am tried and tested and that’s what I am telling the people here,” says Bhattacharya.

The CPM senior is the architect of the “Siliguri model”, a tie-up experiment between the Left and the Congress that has now become a state-level template.

Bhattacharya, who had been urban development minister in the cabinets of Jyoti Basu and Buddhadeb Bhattacharjee, says his voters will not be swayed by the BJP blitzkrieg.

Bhattacharya says that after Ghosh became a councillor in 2015, he had handpicked his then understudy to handle some key departments in the Siliguri Municipal Corporation.

“We knew that he had secretly been in touch with the BJP for the past few months to fulfil his greed and ambition…. The people of Siliguri haven’t liked this volte-face and will punish him,” says the CPM leader. 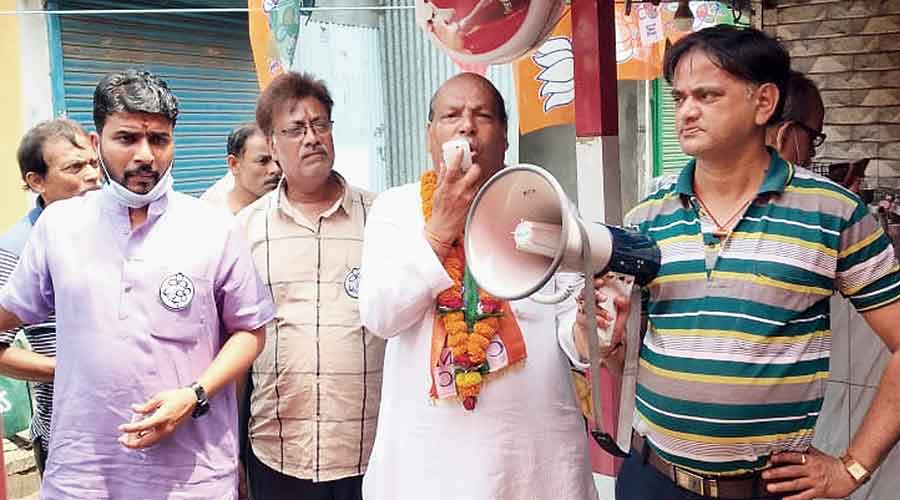 Ghosh swats away such allegations. “I was keen to work for the people of Siliguri and I was not getting the opportunity.… I needed the hands of a new friend to fulfil my objective and that’s why I am here,” says the PhD in microbiology.

Ghosh appears to make it a point to show that he is comfortable in the saffron ecosystem. “What’s wrong in saying Jai Shri Ram?” he asks, before stressing that he has full faith in the BJP’s “Nation First” policy.

“This stress on India, Indian-ness and Indian culture is our strength…. Add to that our leaders’ pledge to develop north Bengal. I am cent per cent confident of victory,” Ghosh adds.

Siliguri is an interesting mix — its 2.25 lakh voters include over 90,000 non-Bengalis. Marwaris, Biharis and Nepalese make up this segment.

Bhattacharya, who used to be called Asok Agarwal behind his back by the hardliners in the CPM because of his proximity with the business community, had an undisputed sway over this section that ensured his electoral success in Siliguri, which is part of the Darjeeling Lok Sabha constituency that the BJP has been winning since 2009.

“It will be difficult for Asokda to keep his support base among the non-Bengali population as the majority of them have switched loyalties to the BJP,” said a veteran observer of Siliguri politics.

The heavy presence of non-Bengalis, a source in Trinamul said, was the reason behind Mamata Banerjee springing a surprise by nominating Mishra, a former professor of international relations at Jadavpur University.

Although a section in Trinamul had initially been unhappy with Mishra’s nomination — some had even felt that Mamata had given a walkover to Bhattacharya by fielding a “lightweight — the ruling party has been putting up a spirited fight in the last leg of the campaign on the back of repeated visits by the chief minister.

“Didi has urged people not to vote for the CPM anymore as she has been doing all the work here…. We are confident of wresting the seat from Asokda,” says Ranjan Sarkar, the Trinamul president of Darjeeling.

According to him, the arithmetic is in favour of Trinamul. “The CPM got only 7 per cent of the votes (in Siliguri) in the 2019 Lok Sabha elections while we more or less retained our 2016 vote share. The BJP was ahead in the seat….  This time, the CPM will increase its vote share by a few percentage points, which will affect the BJP and we will comfortably win the seat,” Sarkar says.

Bhattacharya, a veteran of many elections, says the claims of his opponents mean little as his supporters will vote for him silently.

“While it is true that the BJP has grown here, their presence is limited to three-four wards…. They don’t have an organisation either. And last but not the least, the

non-Bengali population, the majority of whom are involved in business, are with

us because unlike the rest of Bengal, Siliguri has been a peaceful city. People know that I have ensured peace here,” he says.

The north Bengal city has indeed been an oasis of peace, which has encouraged the spurt in trading activities and boom in the realty and hospitality sectors.

“Most people living in the Northeast, or even in neighbouring countries like Nepal and Bhutan, want to have their second homes in Siliguri and that’s why there is a boom in real estate…. The price of a cottah of land is in excess of Rs 60 lakh,” says a businessman.

“It’s a cosmopolitan city and as it’s a trading hub, people here want the growth story to continue,” he adds.

Aware of the people’s wishes, BJP leaders like Shah are promising a tea park, an IT park, an international airport and a super-fast highway connecting Siliguri to Calcutta. Trinamul’s thrust has been on Mamata’s delivery while the Left’s pitch is around Bhattacharya’s success in creating the base for today’s boom.

In this competition of claims and counter-claims, the battle for Siliguri has become a cliffhanger.